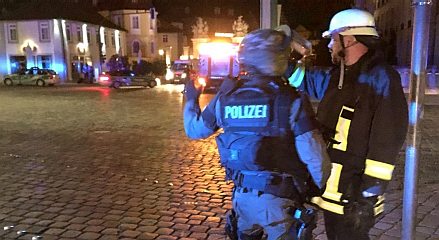 A security staff member at the festival said that a man with a backpack was refused entry. He walked to the restaurant; shortly thereafter the explosion occurred.

Bavaria is getting more than its share of excitement this month. The latest incident occurred tonight, and involved a heavy explosion in the town of Ansbach that was not an accident. It killed one person and wounded ten others, some of them seriously.

Many thanks to Egri Nök for translating this brief report from Nordbayern:

The explosion in the inner city of Ansbach was not a gas explosion, but was caused by an explosive device. So said Ansbach Mayor Carla Seidel in front of journalists. It remains unclear how many explosions were involved. It is not known at this moment if it was an attack, or who set off the explosives. The explosion occurred in front of the Weinstube in the Pfarrstraße, in front of the entrance to the Reitbahn [Riding Course, not sure if that’s a proper name, or a just a riding course — translator]. There the Ansbach Open Air is taking place, a three-day music festival that attracts many visitors. The concert was terminated; some 2,500 visitors left the area. The police initially spoke of a “restaurant explosion”.

A witness says the town center is completely shut off. People cannot get back to their houses. There is probably a communication block by authorities, or something like that. The hotel and houses nearby have been evacuated.

So that is why we are not seeing pictures or tweets or anything, and why reports mentioned the streets were quiet: there is no one there.

Official police source: Police think the dead person might be the suspect. Press conference scheduled for 3am.

19 thoughts on “Explosion in Ansbach”