The following graphic is a present for our German friends. I put it together today with the help of our German translator Egri Nök.

Given the latest hate-speech edicts emanating from the Justice Ministry in Berlin, I doubt the image can be published in Germany. But our German readers can at least come over here and have a look at it: 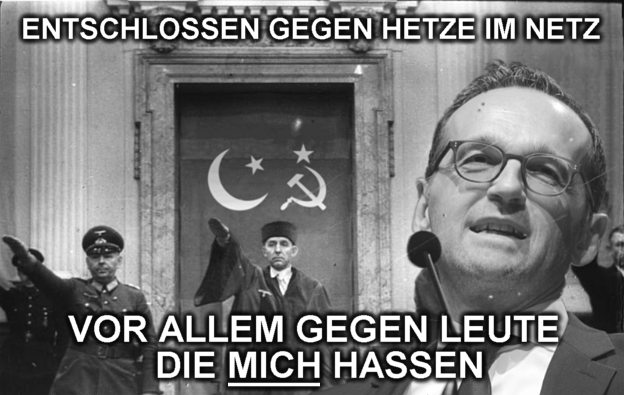 This is the English version: 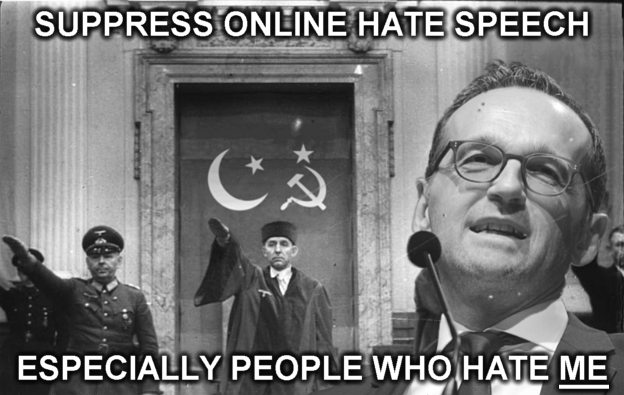 The context of this meme is as follows:

Last fall, as the Great Migration Crisis unfolded in Germany and the rest of Europe, Justice Minister Heiko Maas (in the foreground of the meme pics) announced that laws against hate speech would be strictly enforced against people who criticized immigrants and immigration policy on social media. Chancellor Angela Merkel later enlisted the help of Facebook, Twitter, and other internet giants to help her crack down on such “hate speech”.

The pressure was ratcheted up again earlier this month when police raided the residences of at least sixty people who were suspected of posting “agitation” against immigrants on the Internet. Mr. Maas said:

“The resolute action of investigative authorities should motivate everyone to think before getting creative on Facebook… Everyone should take that to heart before opening his mouth.”

In other words, all those people were busted (or at least investigated) pour encourager les autres. It’s kind of like the farmer who kills a crow and hangs the corpse on a fence post to notify other crows of what they’re in for.

The law under which malefactors are being prosecuted is §130 of the criminal code. An official English version is available here. Among other things, the law says:

German citizens are now discovering that virtually anything — and I mean anything — they say online that is remotely critical about migrants may get them arrested.

Furthermore, as we reported a few days ago, Anetta Kahane of the Amadeu Foundation wants to ban any content that criticizes or lampoons herself or her boss, Heiko Maas.

That’s why I made these meme pics.

When I told Egri Nök that I was working on an image of Heiko Maas, she warned me: “Watch out! You can be prosecuted!” I reminded her that as an American citizen living in the USA, I am protected by the First Amendment of the Constitution. But that’s no impediment to Anetta Kahane who, in her hubris, believes she has the law on her side when she fingers foreign nationals.

And indeed she does.

The applicable law is here (in German). Wikipedia has an explanation of it, also in German. Many thanks to Egri Nök for the translation:

According to §130 StGB, offenses committed abroad, no matter whether by German citizens or by foreigners, can be prosecuted like a domestic offense, if they appear that they have been committed in-country, so as to disturb the public peace in Germany, and violate the human dignity of German citizens. So, for example, it is enough that offensive content is accessible from Germany via the Internet, for instance in form of an HTML page. Subsequently German courts are responsible for crimes of incitement committed from foreign countries. That is why, for example, the Holocaust denier Ernst Zündel was convicted for inflammatory propaganda, which he had been releasing in the Internet from the USA and Canada, and was sentenced by the district court of Mannheim in 2007.

When I learned of this noxious law, my Scots blood — which runs strong in me — was aroused, and I went digging around the Internet for exactly the right photographs. The result may be seen at the top of this post. It is my way of extending a middle finger to Heiko Maas, Anetta Kahane, and any other puffed-up German apparatchik who thinks he can enforce German law against an American citizen living in the USA.

However… I probably shouldn’t plan a visit to Germany anytime in the near future.

The background image used for these meme pics features Roland Freisler (center, in the robe and funny hat). Dr. Freisler was the hanging judge of the Third Reich, and was notorious for handing down death sentences in the Volksgerichtshof, the People’s Court.

The original featured a swastika flag hanging behind Judge Freisler, in front of a bust of Adolf Hitler. I removed both, and replaced them with the “cresickle” — the crescent-and-star of Islam next to the hammer-and-sickle of International Communism — which serves as a suitable emblem for Modern Multicultural Germany.

The top line of the German version of the meme was chosen to reflect the actual words used by Heiko Maas: “Entschlossen vorgehen gegen Hetze im Netz”. Which means, roughly, “firmly act against hate on the Internet”.

The title of this post is a quote from the song “It’s Alright, Ma (I’m Only Bleeding)” by Bob Dylan.

23 thoughts on “Don’t Hate Nothin’ at All Except Hatred”