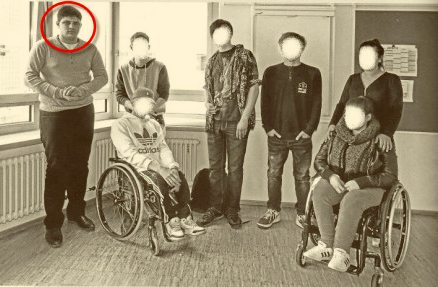 The perpetrator of the Munich massacre was a young Iranian-German named Ali David Sonboly. In the three days since Mr. Sonboly killed himself, more information has emerged about his background and what led up to his shooting spree — which he apparently started planning a year in advance, much as Mohamed Lahouaiej Bouhlel did with his truck jihad in Nice.

Below is a report from Politically Incorrect on the disturbed life led by Ali David Sonboly before he went on his rampage last Friday. Many thanks to Nash Montana for the translation:

Apparently Ali David Sonboly took part in a so-called “preparatory class” in Schwabing in the school year of 2015-2016. It’s the kind of class in which the only students admitted are generally those who had a bad average grade in the 10th class which prevented them from advancing into upper grades. This way those students receive another chance, if they pass the preparatory class, to advance and eventually complete school and graduate from the upper levels (Abitur). It’s entirely possible that Ali did not pass this class, and that this was another trigger for his running amok.

At a press conference today at noon, further details were made public: For instance the gun that the Iranian used was obtained by him via Darknet in Eastern Europe. It supposedly was originally a gun used as prop in a theater. The gun was re-armed again before it was sold. The serial number was filed off, which underscores the illegality of the sale. The Glock 17 came with two magazines with a capacity of 17 shots each. Since Ali shot the weapon 57 times, he must have reloaded the gun by hand.

That’s what he probably did on the parking garage roof since the police found one intact bullet there. it’s assumed that it fell out of Ali’s hands when he hurriedly reloaded the magazine. Before, during or right after that is probably when the dialogue with the Bavarian [on the balcony] took place.

The offender shot five persons inside McDonald’s, according to police information. Two others were shot in front of the restaurant, one in front of the Saturn and one inside the Olympia shopping mall by the escalators. 35 people were injured altogether, twelve of them severely. As he fled he was apprehended by a police patrol in civilian attire, after which as a consequence Ali David killed himself by pointing his left hand holding the gun against his head and pulling the trigger. The civilian police shot at him once, but they missed.

Ali David Sonboly was admitted to an inpatient psychiatric hospital in 2015. After that he went through outpatient treatment. Besides depression, he had a so-called “social phobia” in which the afflicted person develops fear and anxiety upon coming in contact with other people. Until a few weeks before the shooting, the Iranian had been in psychological treatment. A last contact with a doctor took place in June of 2016. The Abendzeitung reported that the killer had written a manifesto.

Ali S. had apparently prepared himself for this attack for about a year — since he visited the location of the Winnenden school shooting [Wikipedia link]. This is what several documents show that have been found on a large multiple-terabyte hard disk.

Contrary to what the BKA first reported, it wasn’t the manifesto of the Norwegian mass murderer Anders Behring Breivik that was found on the computer, but it was a manifesto that Ali S. had written himself. In it he apparently was writing about spree killers and the attack he was planning.

But why the killer exactly now and why he perpetrated the bloodbath at the OEZ is at this point remains unclear.

The Berliner Zeitung reports that Ali David was very interested in Anders Breivik, who also killed with a Glock 17. On the Internet the Iranian was intensively involved in shooting games in which he also threatened co-players:

The 18-year-old had an account on the online gamer website “Steam”, on which he continuously changed his profile name such as “Psycho”, “Until I see no point anymore”, and “Godlike”, a former school friend of Ali who has known him since first grade, says.

Because he kept threatening everybody again and again, the former schoolmate and the other members eventually shut Ali out of the gamer group more than a year ago, and also out of his circle of friends. But the German-Iranian kept popping up under new names over and over again. On the day of the shooting he apparently prompted his former classmates to come to the McDonald’s location at the OEZ. “I will come get you and shoot you”, he supposedly said.

The Facebook account with which he prompted people to come to the McDonalds location, was not “hacked” as the police originally said, but he himself had created it as a fake profile. BILD reports that Ali Sonboly had planned his attack very well:

The deadly shooter of Munich had prepared his attack for well over a year. That’s what the president of the Bavarian LKA, Robert Heimberger, said Sunday in Munich. Preparations for the attack go back to the summer of 2015.

The weapon that the German-Iranian was using was obtained on the so called Darknet, which is a hidden and encrypted part of the internet.

The Berliner Zeitung reported that Ali David was also very interested in the spree killing in Winnenden and that he was looking around on location:

As the SZ now reports, S. apparently was looking around at the location of the spree killing of Winnenden. According to the paper he drove himself to Winnenden to look around and take pictures. At a press conference on Sunday it was also said that the offender had also gotten intensively involved in violent video games such as “Counterstrike”.

As for details about the bullying of him, most likely by Turks and Arabs at the school, there is a previous court process that took place. The chief prosecutor Thomas Steinkraus-Koch did not want to make any statements at this time, as that falls under the laws for legal protection of children and minors.