The Egyptian-born Grand Mufti of Australia, Dr. Ibrahim Abu Mohamed, is not well-known outside of Australia, although he did gain prominence briefly last fall for his public remarks after the jihad massacre in Paris. Reacting to the news from France, Dr. Mohamed said that the West needed to address “causative factors such as racism, Islamophobia, curtailing freedoms through securitisation, duplicitous foreign policies and military intervention.” The usual Islamic boilerplate, in other words.

A few days later The Daily Mail revealed that in a book written in 1993 (and translated into English by the notorious Keysar Trad), the mufti addressed Western women, describing them as “…exposed as a piece of sweet pastry, without covering, devoured by the eyes of men, dirtied with mud, and having flies roam around you.” 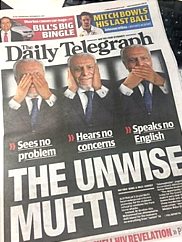 The following day there was a big kerfuffle over the cover of the (Australian) Daily Telegraph, which showed three photos of his eminence in classic “see no evil/hear no evil/speak no evil” poses. Various media outlets went into high dudgeon, claiming that Dr. Mohamed had been “portrayed as a monkey”. The composite photo was seen as racist, and so was its caption: “Sees no problem, Hears no concerns, Speaks no English.” The last part is a reference to the mufti’s penchant for holding press conferences in a language other than English — presumably his native Arabic.

Take a look at the photo — it’s not like the Telegraph put his face on fuzzy little monkey bodies. He’s shown in his usual suit and tie. The paper’s digital artist has just added pairs of hands in appropriate positions. In this case, “monkey” is in the eye of the beholder. It’s a stretch, even for the legacy media.

I collected all of the information above to introduce a recent statement released by the grand mufti. It was sent to us by Salome, a long-time reader and commenter in Australia. The text arrived as a PDF, so I don’t know its original provenance. The photo of his eminence that was included in the PDF must have been taken when he was far younger than he is today, so I’ve used one from a more recent media article.

Read Dr. Mohamed’s statement carefully, and see if you can discern any concrete information in it — any meaning whatsoever. As far as I can tell, it’s 338 words composed of vapor and phlogiston: 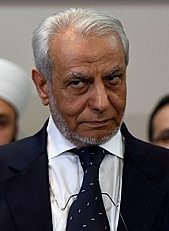 It is essential at the outset to differentiate between an ideological notion and its followers, and indeed between ideological systems and those who belong to them. Fundamentally all the religions are free from any fanaticism that breeds radicalism. Radicalism is one of the diseases of fanaticism, and Islam specifically considers fanaticism against its very nature, against its methodology and teachings, and against its goals. Islam is a religion that at its very basis is a beacon of light from which all truth streams and as such is contrary to all that radicalism, fanaticism or extremism represents.

Radicalism is an old epidemic that renews its fall upon societies every now and then, causing confusion and fear amongst its citizen. It undermines the harmony of societies, serves to mar specific sections of a society and some of the society’s interests. It also distorts the facts of Religions when it falsely aligns itself to them. Radicalism is a disease without country, race, or religion; its direct cause is usually a lack of understanding of religious teachings, wrongly nourished through error of interpretation by individuals who lack the religious education and training.

It is therefore a disease that all religions dissociate themselves with [sic], however those most vulnerable to it are those individuals who have deficiency in knowledge and understanding resulting in a lack intellectual and cultural immunity. It must therefore be stopped and treated.

In treating this disease, security mobilisation alone is not sufficient to deal with it, since ideological positions cannot be changed by legislation alone. To prevent the evolution of radicalisation from its manifestation in the individual to that of a phenomenon and from the state phenomenon to an ideology, we must collectively pool are efforts and resources to build a more resilient community that is able to confront and treat this disease. Leadership in the pursuit of this goal is crucial and at the forefront of community leaders must be the esteemed, intellectual religious scholars of all faiths, and those enlightened literates [sic] and people of high opinion.