We were awakened in the middle of the night by a huge flash of light in the midst of what appeared to be a windy storm…the electricity was gone…between the continuing booms and bangs we slept fitfully far past first light.

A robo call came in a while ago telling us our electricity had been restored. But it hadn’t…one reason we keep a plain land line, not a wireless wonder, is just for such cases…

We were able to contact the electric co-operative’s office to tell them we were still out and needed someone to inspect the transformer sitting at the very edge of our yard, between us and the long cleared out area where the power line runs from the house to the road…

…Thank heavens,and our donors we have a gas cooking range, so all is not lost. And we have this ability to reach you because the Baron plugged us into the UPS (a battery backup). This will give out soon, but at least I can let you know why it’s so quiet around here.

Update from the Baron: The power just came back on, so that wasn’t too bad. The outage gave me the opportunity to sleep really late, so I’m quite refreshed at the moment, sitting here with a nice cup of coffee.

The jury-rig I put together with the UPS, the modem, and the wireless router worked well. Along with Dymphna’s tiny little computer (which, to my deficient eyes, has a screen the size of a postage stamp), that gives us a way to post notices and approve comments when the electricity goes out. Provided we retain phone service, that is — which we did this time.

I woke up about 5 o’clock this morning when the rumbles started. And then there was a sudden loud click with a simultaneous bright flash that lit up the room, followed a tenth of a second later by a tremendous BANG! Which means it was a lightning strike on one of the oak trees at the edge of the woods, or maybe on the transformer at the top of the pole just across the yard.

The booming and banging continued off and on for several hours, accompanied by intermittent heavy rain. Then it was quiet for a while they fixed the outage, but now it’s rumbling and raining again. Here’s what the regional radar looks like at the moment: 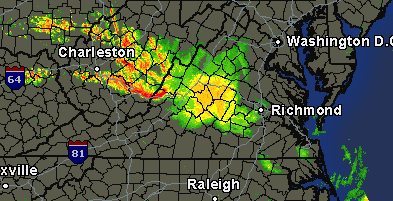 That mass of yellow-orange stuff in the central Piedmont is where we are. You can see the angry red stuff coming at us from over there in West Virginia. So who knows how long we’ll be on the air?

Carpe diem! Now I have to catch up on Brexit and the hostage situation in Germany and all the other stuff that happened while we were incommunicado.