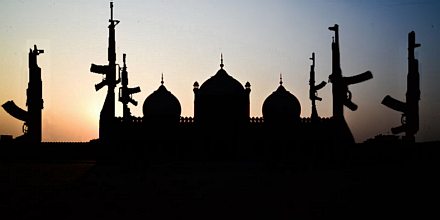 Anyone who has studied the Great Jihad in depth knows that mosques in infidel lands are often used as storehouses for weapons. The situation has become so ominous in North Rhine-Westphalia that the official responsible for security made public statements at a press conference about the caches of weapons that have been uncovered in or near mosques.

Many thanks to Nash Montana for translating this article from Epoch Times:

An arsenal of weapons of radical Islamists was uncovered in NRW (North Rhine-Westphalia). The “top secret assignment” took one week and brought a heavy war arsenal to the surface. This is what the Hessian delegate Ismail Tipi (CDU) says.

According to information from the Hessian CDU delegate Ismail Tipi, a “top secret assignment” of the SEK (Spezialeinsatzkommandos, special operations commandos) in North Rhine Westphalia was carried out. In the cooler room of a vegetable vendor near a mosque, weapons were found and seized. “According to my information on this particular operation, an arsenal with heavy war weaponry was found. The danger of arming of the fundamentalists and Salafists willing to resort to violence is very high in Germany. This was shown clearly by this secret operation,” said Tipi on Friday at a press conference.

The expert on extremism also assumes that weapons are have been stockpiled in other cities. For instance, the Hamburg intelligence service for the protection of the constitution also speaks of an increased number of supporters of armed jihad.

In the meantime more than 300 people in Hamburg have been identified as supporters of armed jihad. “Information about this is increasing. The fear is that Salafist sleepers, jihadists and IS terrorists in Germany may find support through foreign intelligence services that aren’t friendly to German interests. Through these weapons arsenals, militant jihadists and sleepers will be equipped with weapons in their preparations for attacks,” the Turkish-born delegate says.

“Politicians have to use straight talk”

Tipi warns: “If these worries prove to be true, we can expect that these secret weapons arsenals will be used for terrorist attacks not only in Germany, but in all of Europe. It would be extremely negligent not to address this danger and do everything to find these arsenals.” One problem is that many battle-seasoned young Salafists returned to Germany from combat zones and implanted themselves within the stream of migrants, the press briefing further mentions.

“We have to see this threat and we need to act fast. Here, our security administration is asked to look at this very clearly and vigorously, to investigate precisely, and to share as much of the information as possible among relevant administrations and services,” Tipi says.

And he demands: “Politicians have to use straight talk, they have to address the possible dangers and threats, they have to educate the population and call for a full awakening, and ask them to report to the police any type of suspicious activity. The problem of Salafism and IS terror will get bigger and bigger if we don’t all respond. Here, each and everyone of us is asked to step up.”

Tipi’s political engagement against radical Salafists has already led to death threats against him.

21 thoughts on “The Mosques Are Our Barracks — And Our Armories”