We’ve posted several times about the multicultural antics of Cardinal Rainer Maria Woelki, the Archbishop of Cologne. Cardinal Woelki disparaged the AfD (Alternative für Deutschland, Alternative for Germany) for its opposition to mass Muslim immigration into Germany. Now another cardinal, the former Archbishop of Mainz, Karl Lehmann, has joined the debate on AfD. Rembrandt Clancy has translated an article about the migration-loving cardinals, and includes an introduction and endnotes to provide context for the reader.

Part of the background to this short article by Rev. Prof. Wolfgang Ockenfels is the “refugee” boat which His Eminence, Cardinal Rainer Maria Woelki, brought into service as an altar for the political Novus Ordo Mass he celebrated on the Feast of Corpus Christi (Gates of Vienna reported). He had it placed in the southern part of the Domplatte, in the immediate vicinity of the Cologne Cathedral. The entire stunt unfolded as if the Cardinal were unmindful or did not care that this same venue hosted the migrant sexual attacks on German women on New Year’s Eve.

Since Vatican II, the Novus Ordo Mass has consistently allowed expression for an endless stream of novelties, but in this case the ever flexible NO-Mass appears to have extended its creativity by providing the boat-altar with a permanent home:

It is consummated — the Cologne Cathedral is to be used for the purpose of heathen cult site where one can pay homage to the invaders. The boat used for human smuggling … now stands like a reliquary positioned for the devotion of the faithful where normally the Christmas crib has its place. Wellness-Woelki had said in his “boat-sermon”: “I am convinced that today Jesus would sit in the refugee boat… (Politically Incorrect).

The Archbishop of Cologne believes Islam is compatible with the German Constitution and supports mass immigration (cf. GoV, April 26, 2016). The AfD’s Beatrix von Storch has recently offered a public answer to Cardinal Woelki (cf. GoV, 7 June, 2016); otherwise dialogue in the neo-Catholic Church, which replaces the Great Commission to teach all nations (Matt. 28:19-20), is not to be extended to the Alternative für Deutschland (AfD) party.

In this connection, Prof. Ockenfels also mentions the former Archbishop of Mainz, Cardinal Karl Lehmann, who gave an interview (15 May 2016) to Deutschlandfunk. The Cardinal explained that he had at one time spoken unofficially for an hour with Gregor Gysi and Oskar Lafontaine, leading figures of Die Linke (the Left), the party which emerged from the former East German SED (Socialist Unity Party),

[b]ut I would not do that now with the AfD; the basic model of the party and the nationalistic “small-smell” is [sic] too strong for me. So I would not take part at this stage, although it makes me uncomfortable that there are twelve percent of the voters who of course do.

Rev. Prof. Wolfgang Ockenfels was born in Bad Honnef am Rhein in 1947. Having entered the Dominican Order in 1967, he studied philosophy and Theology and was ordained in 1973. From 1974 to 1978 he read Social Ethics and Economics in Freiburg, Switzerland. His doctoral thesis was on the theme of Unions and the State. He completed his Habilitation in the field of Christian Social Doctrine at the University of Augsburg on the subject of faith and politics. Prof. Ockenfels has published a very long list of monographs, articles and contributions. Since 1985 he has been Chief Editor of Die Neue Ordnung, a Christian journal founded in 1946 by opponents of National Socialism.

(From the Editorial of Prof. Wolfgang Ockenfels in the “Neuen Ordnung”, Edition 71, which is due to appear shortly. The text also appeared on kath.net and Politically Incorrect) 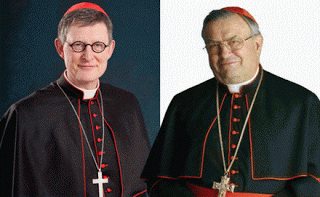 “Doggy sensory sensuality” — to adapt Friedrich Nietzsche freely[1] — also assails the higher clergy now and again, especially when they run out of arguments. For the presiding prince of the Church in Cologne, it is the tongue; for the retired Archbishop of Mainz, it is the nose. Both sense organs are now being mobilised against the AfD [Alternative für Deutschland party]. In an interview with Deutschlandfunk (15.5.2016), Cardinal Lehmann refused a dialogue with the AfD in the following words: “the nationalistic ‘small-smell’ is too strong for me”. By its association with nationalism, this “small-smell” concentrates here into a smell which eschews rational proof, and it is precisely for that reason that it is supposed to be effective.

Cardinal Maria Woelki also cultivated a likewise poorly thought-out disparaging commentary — which was probably based on a sensory phantasm — when in his statement on Domradio (24:4:2016) he commented on the AfD’s criticism of political Islam’s incompatibility with the Constitution, using the following aesthetically elaborated words: “that must be left to melt on one’s tongue for now”.[2] Not the tongue, however, but the brain is supposed to be the preferred organ of discernment for a cardinal, for then the following sentence would not have escaped his lips: “Who says ‘yes’ to Church steeples must also say ‘yes’ to the minaret”. Objection, Your Eminence! The limits to freedom of religion are not a question of taste, but are an age-old legal problem in the face of religio-political perversions.

And Your Eminence will permit of another objection. It relates to the use of a Maltese “refugee boat” as an altar for the Mass of Corpus Christi next to the Cologne Cathedral. The boat is a religiously sensate symbol to be sure, but what purpose does this politicised liturgy serve? Is Christ present in a boat together with people-smuggling bandits, economic migrants, super-masculine Islamists and potential terrorists, or is he perhaps with persecuted Christians after all? Here, too, a rational distinction would have been necessary, the more so as fleeing Christians continue to be persecuted in German exile.

Unfortunately rationally critical voices are becoming rare. Otherwise the Central Committee of German Catholics would not have come up with the foolish idea of baring AfD politicians from their recent “Catholics Day” [Katholikentag].[3] This committee conducts “dialogues” on an ongoing basis with political parties who appear useful to the current politico-cultural-Catholicism; this includes dialogue with the SPD, the FDP, the Greens and Den Linken (the Left Party), and even with Islamists.

Whoever for the last fifty years has been faithful to the founding principles of the CDU [Chancellor Merkel’s Christian Democratic Union], which originally held positions on values compatible those of the AfD today, may fall prey to the suspicion of being senile or sentimental, unless he slowly reflects upon departing the party. The inability to take leave of the CDU continues to be nourished by the hope that the party might still be capable of recalling its conservative-Christian heritage and thereby escape the fate that was already in store for the Italian Democrazia Cristiana (DC) in 1993.[4] At any rate, Helmut Kohl had continued to maintain a little of the Catholic social “stable smell” — and a keen sense of the media’s opinion poll developments which had guaranteed his hold on power.

His ambitious successor appears to lack these capabilities. It is true that she has been adapting herself of late de facto to the mass-immigration-critical tendencies by attempting to delimit access to Europe, but she does it in so half-hearted and equivocal a manner as to increasingly forfeit the approval of her voters. To be precise, they prefer perhaps to vote for the original than for the copy. “Faith can move mountains”, announced Angela Merkel in a television interview with Anne Will in which she defended her refugee policy. However, the faith with which I would otherwise be pleased to hear the message of the Gospels, fails me here.

But as soon as faith bears on political claims to power, I become mistrustful. For the mountains of problems with which the Federal Chancellor has saddled herself shall nevermore permit of their removal by quasi-religious means or be caused to “relocate” by way of Europe or some other way. Rather, her “Christian” policy, with which she is burdening her CDU and also other political forces, raises questions which were formerly discussed as questions of theodicy: How can a merciful and at the same time just God permit an almost unlimited immigration policy completely against the will of the respective indigenous inhabitants?

Naturally, no one outside of Mrs. Merkel and her kind knows the historical will of God. Transferred to C-party politics, however, the following question arises: How does her refugee policy of mercy relate to the will-to-justice of a God to whom, from the perspective of the theology of Creation as well as Trinitarian theology, order is closer than chaos?

And how can the presently chaotic immigration policy be justified somehow “from a Christian standpoint”? And what does the CDU still have to do with Christianity after all, when they no longer even wish to have anything to do with what is handed down through Christianity, which is to say with the natural law of justice marked by reason? Felt compassion without reasoned justice is not given to legitimation in Christianity, as Thomas Aquinas already knew in his time.

Well and good, the only thing that can help here is prayer. But miracles in politics are extremely rare. The ecclesiastical incapacity for otherwise urgently required dialogue with all possible positions, no matter how deranged, is proven in its sensual-affective, but not very meaningful and rationally incomprehensible reluctance to even look seriously at the programme of the AfD.

Partisan war games do not really belong to the ecclesiastical mandate of bishops. Whoever is happy to conduct dialogue with Islamic functionaries, while refusing it to AfD representatives, loses his credibility. He gambles away his authority. For in the final analysis, the mature and knowledgeable laity in the Church have no need of bishops who set themselves up as partisan governesses. Zeitgeist-determined appeasement is undesirable.