“They know they cannot defeat the West militarily. They cannot even defeat the weak Arabic states. So they have to bring the West to the point of destroying itself. They want to divide the society. They know if they succeed, it will fall apart of its own accord.” 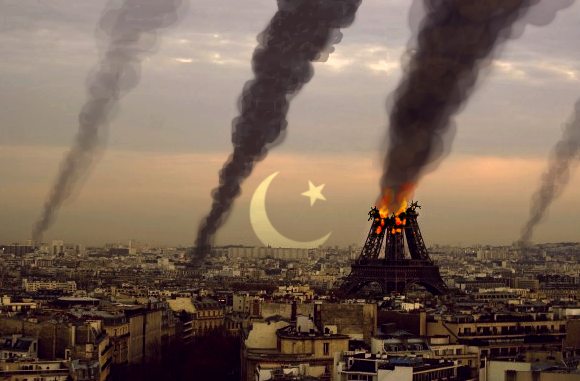 The following interview with the Algerian writer Bousalem Sansal was occasioned by his latest book, 2084. The End of the World. If you’re looking for hopeful words, you may want to skip this piece.

Many thanks to JLH for the translation from Die Welt:

“One Nightmare Complements the Other”

Bousalem Sansal is an Algerian. In 2084. The End of the World, he tells of an Islamic dictatorship. A conversation about the future.

Sunday morning, nine o’clock. The rain is pouring down. Bousalem Sansal, 66, took the metro anyway. We meet in my quiet office in a rear courtyard in the Marais section of Paris. “It’s beautiful here,” he says, then sits at the round table. He is here to describe a world in which there is no more beauty, only fanaticism. He has cut off his ponytail, which made him look Indian. He was in Warsaw yesterday, and tomorrow he moves on again. As he tells it, he has never done so much traveling for the sake of a book. It will be challenging just to get home to Algeria. 2084. The End of the World is the title of his latest novel. Radical Islam has taken power and extinguished all memories of a previous time.

Interview with Die Welt am Sonntag

Welt: Mr. Sansal. Your book is really grim. Orwell at least had a love story.

Sansal: Yes, I wanted something encouraging too. But in this word of Islamism, love would be hard to believe. Orwell may have been an atheistic communist, but his power of imagination was formed in a Christian context. In Christianity, love gives structure to life.

Welt: It not only structures life, but religion itself.

Sansal: The idea of salvation through love is everywhere in the Christian universe. In the Islamic universe, there is only mother love and the love of God. In love, women hide. The woman herself plays no role. It is love that Islam is fighting against.

Welt: Even though your book is not pleasant reading, over 300,000 have been sold in France alone. How do you explain that success?

Sansal: People are waking up. They are beginning to see that Islamization is not a local phenomenon, but affects all of Europe. We are all afraid, even if not everyone admits it.

Welt: What kind of experience was it, to write such a gloomy book?

Sansal: Neither painful nor pleasant. I am objective, and look at things as a behavioral analyst. Occasionally something can touch me, but I come to my senses and must look at things without using my imagination.

Welt: How does a Muslim read this book?

Sansal: A Muslim like me, who is not devout but grew up in a Muslim country, presumably reads it as you or I do. You in the West are deceiving yourselves if you believe that all Muslims are Islamist. They are more afraid of Islamism than people in the West.

Welt: Since the Paris and Brussels attack, the West is afraid too.

Sansal: Definitely. That was just the beginning.

Welt: A kind of wake-up call?

Sansal: Yes. After the attack at Charlie Hebdo, things were different. The majority could understand it. After all, they had blasphemed. It wasn’t right to kill, but look at what they had done…

Welt: So they provoked it — as the girl in a short skirt provokes a rape?

Sansal: Yes, and this logic explains why the January attacks did not rouse people. But the attack on Bataclan was an Islamic attack, because it was an attack on someone for what they were — their culture, their lifestyle. It was a place for young people, like the bars, the stadium — places the West is made up of. It is exactly this raising of awareness that the Islamists want. They know they cannot defeat the West militarily. They cannot even defeat the weak Arabic states. So they have to bring the West to the point of destroying itself. They want to divide the society. They know if they succeed, it will fall apart of its own accord.

Welt: In France, there are rightist-populist intellectuals who support the theory of “grand remplacement” — displacement of Western/Christian civilization by Islam. Basically, they are saying the same thing. Where is the difference?

Sansal: I find the expression unfortunate. It is not about replacing the population, but about a kind of fusion. France is in the process of Islamizing itself.

Welt: But apparently you agree with it. Is our culture doomed?

Sansal: As a democrat, I would be very sorry to see out civilization collapse, because it has advanced humanity — even if its excesses damage us.

Welt: Why do you stay in Algeria? Why did you stay in the 1990s, when your life was threatened because of your criticism of conditions there?

Sansal: I am offering resistance.

Welt: Is your book available in Algeria?

Sansal: Now, yes, but it took several months. People thought at first that it was banned. It was passed around surreptitiously. Beginning in January, it was suddenly everywhere. Actually, everywhere is not the right word — in the few bookstores that still exist. After independence, there were 150 cinemas and 250 bookstores in Algeria. Today there is not one cinema and possibly four or five bookstores in Algeria. But the number of mosques has increased a thousand-fold.

Welt: We have taken in a million, mostly Muslim, refugees. What is your prognosis for Germany?

Sansal: Germany was completely naïve. In the long term, Germany is the country that is most at risk.

Welt: In what way naïve?

Sansal: For a long time, Germany has convinced itself that is it not affected by the problems. There was Islam in France, in Great Britain, but not yet here. And then, Germany is an extremely tolerant country, because of its war experience. That is being exploited. When the Algerian Islamists were driven out, they found shelter in Germany, where they were recognized as political refugees.

Welt: What evidence would you cite that this war of cultures is in process — even in Germany — and that Islamization of society is moving ahead?

Sansal: The clearest evidence is “Bataclan.” They did not attack barracks, but a concert house, because they do not intend a classic takeover of power, but the prosecution of a cultural war. Second, look at the Arabic world, where this war is being carried out universally and without let or hindrance As to Germany, I am not so sure of what will happen. Turkish Islam cannot be compared to the Islam of the Maghreb.[1] The Turks who came to Germany in the 1970s went to work immediately in industry. In France, the immigrants were left to their own devices. Algerian and Togolese were just mixed together and housed, in the beginning, under inhumane conditions.

Welt: Just now, we are witnessing Islamization under Erdogan. What do you think of this development?

Sansal: The return of the religious — especially in young people — is contaminating the whole society, and that will soon be felt in Germany, too.

Welt: We have had some experience with this intrusion — or, if you like — contamination, with the Böhmermann affair.[2]

Sansal: Erdogan acts like a caliph, the Turks act like subjects, and he has already built himself a palace. The Ottoman Empire was doubtless the most powerful caliphate of the Islamic world. Right now, we are seeing a revival of that power. Erdogan wants to rebuild the caliphate, but he knows the Arabs would never accept that. Perhaps he is thinking of expanding his empire into Europe. On those grounds, Germany is the most threatened.

Sansal: Neither-nor. Because all Europeans harbor resentments against Germany. Germany is rich, influential, extraordinarily well organized. People dream of nothing more than Germany’s fall. One nightmare complements the other. And truthfully many Europeans share Erdogan’s nightmares.

Welt: If you follow that thought to the end, it means that we in Germany would be living under Erdogan’s caliphate. That sounds absolutely absurd. Is Europe really finished?

Sansal: Yes. It has no future.

Welt: Can you still say what you think in Europe?

Sansal: No. that’s over. On one hand, I am invited because people need to hear different opinions that are not politically correct. At the same time, they are afraid that I will cause trouble.

Welt: What may you not say?

Sansal: No one will tell you that — it is far subtler. But anything that criticizes Islam causes problems. As though you can criticize anything — even God — but not Islam.

Welt: Are you Islamophobic, Monsieur Sansal?

Sansal: Not as the word is used. I don’t like Islam, I don’t believe in it, and I am sure that it is not only a danger, but an enormous danger. It will blow up our society.

Welt: Your colleague Kamel Daoud caused an uproar when he described the young Muslims who attacked women in Cologne on New Year’s Eve as sexually repressed. Do you agree?

Sansal: Daoud lives in Algeria and experiences such situations every day. A young Muslim, suddenly confronted with a free society, misinterprets a woman who shows her body.

Welt: Do we lack the conviction and courage to defend our values?

Sansal: Islamists fight courageously for what they believe in. That alone is in their favor. As to us, unfortunately I must say that there is nothing driving us. Once we would have gone to the ends of the earth for the sake of the word “freedom”. Today, it is a hollow term.

Welt: That’s not true. After the attack on Charlie Hebdo, millions went into the streets on behalf of freedom of expression.

Sansal: That was no more than a spontaneous feel-good reaction. Its only value was to put the heads of state on display. And in the lead, this poor Hollande, who couldn’t hurt a fly. In Algeria, we saw what people do when they are overcome by feelings — mindless collective howling.

Welt: Shall we take the title of your book literally — End of the World — with no hope anywhere?

Sansal: You know, sometimes there is a little thing — an idea, a sentence — and things take a different turn. In Algeria, it was the words of the writer Tahar Djaout, which ran across the land like a wildfire. The scales fell from people’s eyes. He was right . His words gave them courage.

Welt: What did he say?

Sansal: In an interview, with his unassuming smile, he said: “If you talk, you die. If you don’t talk, you die. So talk and die.” A week later, they murdered him.

4 thoughts on ““One Nightmare Complements the Other””