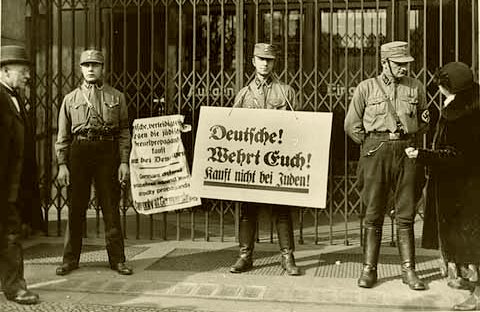 Today is the 82nd anniversary of the “Night of the Long Knives”, the bloody purge that consolidated the power of the Nazi Party and Adolf Hitler and effectively ended the rule of law in post-Weimar Germany.

The orgy of extra-judicial killing began in the wee hours of June 30, 1934, when Hitler — then still Chancellor and not yet the Führer, which had to wait for the death of President Hindenburg a month later — landed with his entourage at Munich airport to have a reckoning with the leadership of the SA (the Sturmabteilung or Storm Troopers), and especially with its commander, Ernst Röhm. The SA was the last remaining independent force that could conceivably rival Hitler and the Nazi Party. It had three million members who acted as a paramilitary force against communists, socialists, and other enemies of the Nazis. When the Nazis gained uncontested political power, rather than give up their street-fighting ways, the storm troopers continued to do drunken battle with their perceived enemies — not just communists and socialists, but Catholics, conservatives, foreign diplomats, and random passers-by. Their antics had become a severe irritation to Hitler, and Röhm’s undisguised ambition and contempt for his ostensible leader posed a threat to the Nazi hierarchy.

Thus began a 48-hour bloodletting, mostly carried out by the SS (Schutzstaffel, the main rival of the SA) in Bavaria and other parts of Germany. Upwards of a hundred, and possibly several hundred people were summarily executed under Hitler’s orders.

Homosexuality was rife in the leadership of the SA, including Röhm, and when Hitler surprised the leaders at the hotel where they were staying, at least one officer was rousted from his bed along with his much younger catamite. Both were immediately taken outside the hotel and shot.

Röhm and dozens of other officers were executed the same day, and more on the next. Most of the victims were leaders of the SA, but not all — a number of prominent politicians who thwarted Hitler or questioned his decisions were dispatched. When the bloodshed was over, Hitler had gained undisputed political power in Germany. In a speech not long afterwards, he declared himself “the supreme judge of the German people.” His cabinet dutifully passed a law retroactively legalizing the actions taken during the purge.

The law is very important to Germans. Following the rules precisely comes naturally, and is considered the highest virtue. Thus, despite the veneer of legality that was imposed after the fact, the Night of the Long Knives must not have sat well with many Germans — politicians, soldiers, businessmen, and ordinary people. Their assent to those events, whether tacit or explicit, probably contributed (along with the later Holocaust of the Jews) to the collective sense of national guilt.

The following song is Al Stewart’s take on that bloody night in 1934. It was released in 1973 as one of the tracks on his album Past, Present and Future:

When Dymphna, the future Baron, and I went to our first (and only) Al Stewart show back in 2002, we had a chance to meet the man himself during the break between sets.

“I just want to shake your hand, after all these decades,” I said. “I’m a history buff, and when I first discovered your music, I couldn’t believe that someone had actually written a song about the Night of the Long Knives.”

And so he did. It was somewhat different from the version above, since he was doing solo acoustic that night, but the guitar prelude and postlude were exactly the same.

The song lyrics are below the jump:

The morning is humming, it’s a quarter past nine
I should be working down in the vines
Yeah, but I’m lying here with a good friend of mine
Watching the sun in her hair
I pick the grapes from the hills to the sea
The fields of France are a home to me
Ah, but today lying here is such a good place to be
I can’t go anywhere
And as we slip in and out of embrace
Like some old and familiar place
Reflecting all of my dreams in her face like before
On the last day of June 1934

Just out of Cambridge in a narrow country lane
A bottle-green Bentley in the driving rain
Slips and skids round a corner, then pulls straight again
Heads up the drive to the door
The lights of the party shine over the fields
Where lovers and dancers watch catherine wheels
And argue realities digging their heels
In a world that’s finished with war
And a lost wind of summer blows into the streets
Past the tramps in the alleyways, the rich in silk sheets
Europe lies sleeping,
you feel her heartbeats through the floor
On the last day of June 19…

On the night that Ernst Roehm died voices rang out
In the rolling Bavarian hills
And swept through the cities and danced in the gutters
Grown strong like the joining of wills
Oh echoed away like a roar in the distance
In moonlight carved out of steel
Singing “All the lonely, so long and so long
You don’t know me how long, how I long
You can’t hold me, I’m strong now I’m strong
Stronger than your law”

I sit here now by the banks of the Rhine
Dipping my feet in the cold stream of time
And I know I’m a dreamer, I know I’m out of line
With the people I see everywhere
The couples pass by me, they’re looking so good
Their arms round each other, they head for the woods
They don’t care who Ernst Roehm was, no reason they should
Just a shadow that hangs in the air
But I thought I saw him cross over the hill
With a whole ghostly army of men at his heel
And struck in the moment it seemed to be real like before
On the last day of June 1934

27 thoughts on “Now I’m Strong, Stronger Than Your Law”