A prominent Muslim leader who led street prayers in Montreal is also an unabashed affililiate of the Muslim Brotherhood in Quebec. The report below details his connections and associates in the wonderful multicultural utopia that is 21st-century Canada.

Many thanks to Oz-Rita and CB Sashenka for the translation, and to Vlad Tepes for the subtitling:

The following article about Samer Elniz and the Muslim Brotherhood in Quebec was originally published at Poste de Veille. Many thanks to Ava Lon for the translation:

Who is the pro-sharia Islamist behind the street of prayer in Montreal?

Samer Elniz, one of the leaders of the Islamist Muslim Brotherhood in Quebec, invoked Allah and prayed on Ste-Catherine Street in Montreal, on the steps of St. James Church, June 7, at a ceremony co-organized by the United Church of Canada and the Muslim Association of Canada (MAC) of the Muslim Brotherhood. 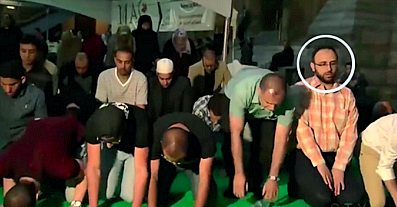 (Photo caption) Samer Elniz, executive director of the Laurentian Community Centre and responsible for the Al-Rawdah mosque, proclaimed the prayer was called “sunset” before the faithful prostrated themselves in the church square, the women behind the men.

The al-Rawdah mosque led by Samer Elniz belongs to the Muslim Association of Canada (MAC), an organization that openly proclaims the ideology of the Muslim Brotherhood.

Mr. Elniz appeared in photos with veiled girls published by the website of the al-Rawdah mosque, reprinted by Djemila Benhabib on her blog, in a post titled “Small veiled girls: our big hypocrisy,” where she denounced “this blatant and cruel inequality imposed on some small Muslim girls.” 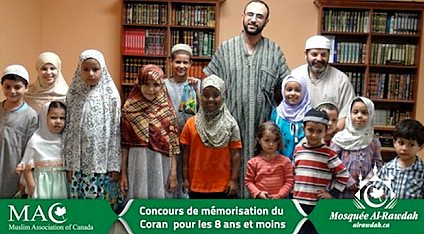 (Photo caption) Samer Elniz on one of the pictures that Ms. Benhabib published on her blog to accompany her post “Small veiled girls: our hypocrisy.”

As a result of his article, she was sued by the mother of one of the girls. Fortunately, Ms. Benhabib has won this case.

The al-Rawdah mosque is the largest house of Sharia in Montreal belonging to the Muslim Brotherhood, an Islamist sect classified as terrorist entities by several countries (Russia, Syria, Saudi Arabia, United Arab Emirates).

Mr. Elniz also co-militates with Samer Majzoub, president of the Canadian Muslim Forum, the first Muslim lobby in Quebec, and with Said Fawaz, the representative of the Muslim World League in Canada, a pro-Sharia organization based in Saudi Arabia.

The Muslim World League, of which Fawaz is the representative in Canada, recently sent propaganda materials to public libraries in Quebec denigrating the emancipation of Western women, criticizing the rejection of polygamy by Christianity, and boasting about Islamic values.

Every year Ali Sbeiti organizes a ceremony in his mosque where girls 8-9 years of age swear by Allah to do everything possible to wear the hijab until death (2014, 2015, 2016).

In 2015, the specialist Wael Saleh warned against the Muslim Association of Canada (MAC), an affiliate of the Muslim Brotherhood:

As local affiliates of Muslim Brotherhood, it is vital for the Muslim Association of Canada and the Islamic Society of North America to set up schools and mosques, according to an expert on Islamist movements at the University of Montreal.

“One of their main goals is to monopolize the Muslim public space to become the sole spokesman of this religion,” said Wael Saleh.

This infiltration of religious communities is extremely disturbing, he said.

“The Brothers are seen by many researchers as the birthplace of the terrorist religious movements.”

3 thoughts on “Montreal: The Muslim Brotherhood at Prayer”