Our English correspondent Paul Weston discusses the attempts by the new culture-enriching mayor of London to impose sharia law on his fellow Britons. 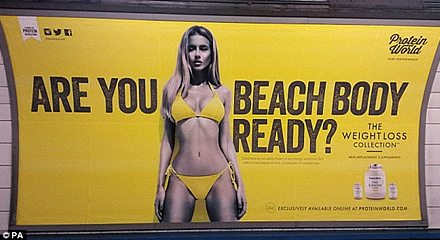 Liberty GB has taken a lot of flak in the past over our proposed policy of banning Muslims from political public office in Britain. The new Mayor of London, Sadiq Khan, has just shown us precisely why we feel this way after he announced his intention to ban adverts showing certain aspects of the female body on all public transport services in London.

Emir Khan made the following statement: “As the father of two teenage girls, I am extremely concerned about this kind of advertising which can demean people, particularly women, and make them ashamed of their bodies. It is high time it came to an end.”

We have yet to find out whether this will be a complete ban on the portrayal of all women in all stages of dress or undress. Emir Khan claims his primary interest is to help stop women feeling ashamed of their bodies, so I suppose a ban would mean Candice Swanepoel might be off the menu, but not perhaps the slightly more Rubens-esque Yasmin Alibhai-Brown wearing nothing but a saucy hat and burkini writhing around a sun-kissed beach extolling the wonders of Sharm el-Sheikh in a come-hither manner — which would rather finish what ISIS started in terms of destroying the Egyptian tourist industry — but I digress…

The BBC breathlessly reports: “As part of his mayoral election manifesto Sadiq Khan pledged to ban adverts promoting unhealthy or unrealistic body images” — which, if true, should be in Emir Khan’s election manifesto, but unfortunately for the BBC it is sadly missing. I know we cannot expect the BBC to behave in a wholly impartial manner, but making claims which are easily proved false seems a tad unprofessional — even for the myopic little liberal children who now skip and skedaddle along the BBC’s corridors of power.

If the BBC thought about this a little more they would find Emir Khan doesn’t actually care one iota about the “body shaming” of fat infidel women. If the Tarquins, the Annabellas and other such assorted Islingtonian sophists put their paper thinking caps on, screwed up their little eyes really really tight and like, really, really concentrated they might just discover the truth, which is that a Muslim man having been elected to a position of political power is now quite logically and naturally exercising Islamic political control (Sharia law) over territory.

In the old days it was impossible to do this without first having militarily defeated an enemy. In 21st-century Britain, however, things are very different. In order to exercise political control over territory, you simply need a brainwashed and culturally defeated electorate to return you to power, whereupon you can then inflict Sharia Law upon them whilst pretending it is not actually Sharia, but instead some sort of right-on, PC equality issue.

The tragedy here is that this is exactly what Emir Khan has done and the vast majority of people WILL think it’s about women’s equality, particularly those from the intellectually challenged liberal/left. Here for example is Women’s Equality Party leader Sophie Walker, praising the new London mayor: “Sadiq Khan appears to be taking steps towards keeping to his promise to be a feminist Mayor for London.”

And despite exhibiting such a stupendous lack of intelligent or analytical thought, there will be many more half-witted women like Sophie Walker, all suicidally cheerleading for a man who in terms of women’s rights would relegate them to the 7th century in the blink of an eye if he could. Good old Emir Khan will be rolling around the floor of his new mayoral offices holding his sides when he reads Sophie Walker’s praise. He will be flabbergasted how easy it is to fool the liberal kuffar.

As time goes by there will be more and more British cities run by Islamic mayors. Muslim demographics and their choice of urban rather than rural dwelling absolutely guarantee such a scenario. In 2025 native English city dwellers (if they still exist) will all be living under aspects of Sharia law. If posters of women in beach wear can be banned today, then city pubs and bars will be banned tomorrow. And as for the day after tomorrow……

Why is this not obvious to everyone?