Update: According to the latest reports, at least fifty people were killed, and more than fifty wounded. 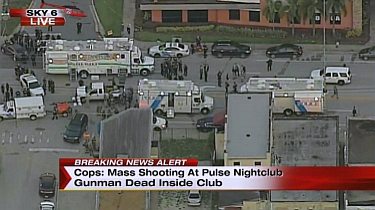 An Islamic terrorist named Omar Mateen attacked patrons at a gay nightclub in Orlando in the wee hours of this morning, killing 20 people and wounding dozens of others. The attacker was shot and killed by police.

The remarkable thing about this story is how quickly the FBI used the “I” word. Less than seven hours after the shooting started they’re referring to it as Islamic terrorism. This is very unusual — has something changed?

Check Gateway Pundit for breaking news. I haven’t seen an article on this in The Daily Mail yet.

From The Washington Times:

Omar Mateen has been identified as the Pulse nightclub gunman who killed 20 people during a rampage Sunday morning, CBS reported.

He was killed after a showdown with police inside the nightclub. His parents are from Afghanistan and authorities are investigating whether he had ties to Islamic extremists, CBS said.

Florida Department of Law Enforcement Special Agent in Charge Danny Banks says the mass shooting is being investigated as an act of terrorism.

He says authorities are looking into whether this was an act of domestic or international terror, and if the shooter was a lone wolf.

Orlando Police Chief John Mina says the shooter was armed with an assault-type rifle, a handgun and some type of suspicious device.

Police had said previously on Twitter that there was a “controlled explosion” at the scene of the shooting at Pulse Orlando. Mina says that noise was caused by a device intended to distract the shooter.

From The New York Daily News:

A terrorist opened fire inside a popular Orlando gay club near closing time early Sunday leaving “approximately” 20 people dead and 42 others wounded in one of the deadliest American mass shootings, according to authorities.

The 2 a.m. attack was “well organized and well prepared,” said local cops as FBI officials painted the attack as domestic terror. The shooter, who was not from the Orlando area, may have had “leanings” toward radical Islam, Special Agent Danny Banks revealed.

Cops killed the lone gunman and found multiple victims dead inside the Pulse nightclub, about four hours after the closing time bloodbath sparked a tense standoff with police.

Police bombarded the club with a “controlled explosion” to distract the shooter and rescue about 30 hostages hiding in bathrooms. Nine officers fatally shot at the suspect armed with an assault-type rifle, a handgun and “some type of device.”

A bullet struck an officer’s Kevlar helmet that police Chief John Mina cited for saving the cop’s life during the gun battle.

An officer working at the nightclub was first to confront the unidentified shooter outside the club as about 320 people partied inside. The attacker moved his assault indoors, opened fire and took hostages as terrified club goers fled.

The shooting happened during Pride Month, a national LGBT celebration honoring the Stonewall riots in 1969. The club hosted a “Latin Night” on Saturday, according to its Facebook page.

Here’s a partial timeline from a local Florida TV station:

‘We Consider This an Act of Terrorism, ‘ 20 Dead Inside Pulse Nightclub, Officials Say

During a press conference Sunday morning, Florida Department of Law Enforcement spokesman Danny Banks officially classified the shootings at Pulse Nightclub as an “act of terrorism.”

About 20 people were killed during the incident, officials said.

The FBI, along with numerous other agencies, was investigating the shooting and it was not clear if it was an act of domestic or foreign terrorism.

There was no indication that more shootings were planned in Orlando or the state of Florida, Banks said.

During the same press conference, Orlando Mayor Buddy Dyer confirmed that numerous people were killed during the attack.

“Tonight, we had a crime that will have a lasting effect on our community,” he said.

Raw: Robot sent into club to check for suspicious device

Orlando Police Chief John Mina said the department was currently working to remove any “devices” the shooter may have left behind.

An OPD officer working at Pulse was the first to respond and exchange gunfire with the shooter, Mina said.

The shooter holed up in a bathroom with hostages and at about 5 a.m. “the decision was made to rescue the hostages that were in there,” Mina said.

During the assault, “our officers shot the suspect,” he said.

The suspect “had a device on him,” prompting a search for others that may be at the scene, he said.

Orlando Police ask for witnesses at the Pulse Nightclub to meet them at OPD Headquarters. Read instructions here.

Orlando Police tell Eyewitness News investigators will update the situation at the Pulse Nightclub during a live news conference at 7 a.m.

Shooter at Pulse Nightclub is dead inside the club, OPD said.

The circumstances of the shooters death were not immediately released.

Pulse Shooting: The shooter inside the club is dead.

The shooting situation at Pulse has been designated a “mass casualty situation,” OPD said.

The department is receiving assistance from other local, state and federal agencies, it said.

We can confirm this is a mass casualty situation. Support from local/state/federal agencies. We expect to brief media shortly.

Orlando Regional Medical Center was put on lockdown Sunday morning after several gunshot patients were brought in for treatment, the hospital said in a release.

Only essential workers were being allowed access to the building, it said.

Out of caution, Arnold Palmer Hospital and Winnie Palmer were also place on lockdown.

Numerous sources report hearing an explosion in the area of the Pulse Nightclub shooting.

Police said it was “a controlled explosion by law enforcement” on the OPD Twitter page.

No information was released on why authorities set off an explosion.

It was reported that 40 people were taken to Orlando Regional Medical Center with injuries.

The condition of those at the hospital was not immediately released.

Officials have not released many details on the situation going on right now at Pulse Nightclub, 1912 S. Orange Ave., in Orlando.

According to the Orlando Police Department Twitter feed, there was a shooting at the club with “multiple injuries.”

OPD warned people to stay away from the area…