Rembrandt Clancy has translated material from an Italian source about the latest threats by the Islamic State against Rome.

A Very Recent Disquieting Image of Rome from ISIS (exclusive)

Escalating threats to Italy, an analysis 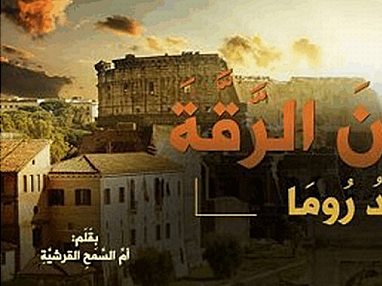 Rome, June 7th (askanews) — Italy is appearing increasingly in the crosshairs of the jihadists of the Islamic State (Isis): In the last four days our country has been directly under propaganda attack by the network of the caliphate; one of these takes the form of a PDF file, the other three are videos, two of which take aim at Rome. The threats are not to be underestimated: first of all, they present very recent images, filmed while in motion and at night, giving the impression in particular of being shot right in the Italian capital, whether by a member of the terrorist organisation or by a sympathiser (unless the footage was “stolen” by the terrorist organisation; but even in that case, the symbolic value of the threat is still complete). Another significant fact: two documents posted on the Internet between the 3rd and the 7th of June have titles that directly involve Italy, an entirely new element. They are called “The Appointment in Rome”, a video circulated last Saturday and “You want Raqqah, and we want Rome”, a PDF document posted today. The following is a description of the four documents examined by askanews.

This short film was given an Arabic title, where in English it becomes “The Deadline Rome” [cf. image of “The Deadline Rome”]. It was posted by “Dabiq-Al Khilafah“ (Dabiq Caliphate) at 00:13 on the 4th of June. The document was produced by the Foundation al Waad (Pledge), which is an unofficial media organ of ISIS. In the short film, which lasts 10:47 minutes and speaks only of the difficulty which the Caliphate is facing in Libya, the title “Appointment in Rome” appears a good five times at regular intervals. After a long preamble on the development of the Libyan situation, a narrator’s voice accuses Italy in particular of leading a coalition for military intervention in the North African country. The jihadists are concerned above all about Italy’s role on behalf of the Government of National Accord. Next there is a call to arms against the West:

“Oh monotheistic brothers, oh you true Muslims, it is your duty to support our Mujahideen brothers in Libya. Help them also with the written word. But you must take up arms.”

An appeal to jihad and martyrdom, pronounced in a dramatic tone, is followed by a song which says: “Remember that victory comes only if it is watered with blood…”. After images of decapitation from the jihadists’ repertoire, one hears the voice of Sheikh Abu Yahya al-Libi, legendary leader, heir apparent of Osama bin Laden and former commander of al Qaeda in Libya who was killed in a raid in 2012: “My dear brothers”, he declares:

“You can be certain of one thing: Allah has promised to be at your side. He stands at your side, surrounds you with his protection and shrouds you with his care. He will follow you step by step. For you, there is nothing but to prepare yourselves to act and to prepare the conditions for that to happen. With patience and faith, prepare yourselves to act, and then act!”

The historical jihadi leader launches an explicit invitation to martyrdom. At this point the images of Rome, being filmed at night, are paired with the voice of the narrator which says:

“Brother mujahed who lives in Libya, land of monotheism: keep in mind the battle of Al-Khandaq and what the Prophet has said, that Allah may bless him. If today the ground has been taken from beneath your feet and the knife of the enemy is hanging over your throat, then remember that Allah has promised that we will conquer Rome, Constantinople and Jerusalem”.

Then changing the pitch of his voice and turning toward Italy he says,

“To you, people of the cross, to you Romans, we say: know that you will be submissive! Rome will be ours! We shall enter Rome raising our cry of jubilance and singing praises to Allah. We will slit your throats, we will flood your streets with your blood. This is the promise of Allah! And know that Allah keeps his promises.”

2) PDF Document: “You Want Raqqah And We Want Rome”.

“They want Raqqah and we want Rome”. With this title the Caliph’s Internet users posted a document today in which they refer to the Italian capital as the “lair” of the Vatican. The document is a PDF file of 8 pages with a “cover” showing the image of the Colosseum and the Theatre of Marcellus. It was posted on twitter by the al-Wafa Foundation, a media organ of ISIS. Absolutely new is the fact that the author of the document is a woman who calls herself “Um al Samh al Qureishyah”, which in Arabic means “Mother of Tolerance of al-Quraysh”. Quraysh is the name of a tribe of Mecca at the time of the Prophet Mohammad. “You want Raqqah because it is governed by Allah and we want Rome so it may be governed by the law of Allah”, so writes the female author before reiterating the following:

“Yes, it is Rome that we want, the city which is the lair of the Vatican, which is the reference point of the Nazarenes, from which an unclean man known as the Pope of war has always launched crusades against Muslims.”

Then the details of the threats:

We will humiliate the unbelievers of Rome, we will rape their women […]. Only those who embrace Islam or who submit to Islam will be saved. There is no other faith than Islam. You will be thinking about this again soon.

This is a short film of ten minutes duration posted on the 3rd of June. In the video produced by the “Province al Kheir”, the jihadists urge Muslim migrants in the land of the “unbelievers” to proceed en masse toward territories occupied by ISIS. The document shows images of Pope Francis during his visit to Lesbos where he met some migrants. Then they launched grievous insults against the pontiff, along with an invitation to the migrants “not to accept alms from this impostor”.

This video of three minutes duration was also posted on 3 June, three days before the beginning of Ramadan. It is a propaganda document which seeks to remind the followers of the organisation that the sacred month of fasting “has always been, in the glorious history of Islam, a month of prayer, but above all of conquest”. Then in a kind of infographics they go through the dates of the epic battles won in the past by Muslims. Particular emphasis was dedicated to the Islamic conquest of Sicily which occurred in 827, with images depicting the disembarkation at Mazara del Vallo in the year 902. Higher on the screen showing the boot [of Italy], the word Rome can be seen to flash.

5 thoughts on “Islamic State: “Rome Will Be Ours!””