Most readers will remember the closely-contested second round of the Austrian presidential election, in which the Green candidate eked out a narrow victory over the FPÖ candidate, thanks to a large number of postal votes that tipped the balance. There were “irregularities” in the voting process, to the point where the FPÖ is officially contesting the result.

Now a new twist has emerged: it seems that the mental competence of the president-elect, Alexander Van der Bellen of the Green Party, has been thrown into question. According to the report, back in March an unnamed party petitioned to establish a guardianship for Mr. Van der Bellen, due to his impaired mental capacity.

Note: If the date is correct, the petition was filed before the first round of the presidential election.

The story has appeared at Politically Incorrect and Unzensuriert.at, in German and English:

Austria: Problems with the Federal President

In a letter addressed to all political factions in the Austrian Parliament, members of Parliament were informed about a proposition regarding guardianship for the federal presidential candidate Alexander Van der Bellen. This proposition was lodged in the District Court in Vienna on 24 March 2016.

Therein the problem of dementia of the Federal President is discussed. This person is, according to article 80 paragraph 1 Federal Constitution, also commander of the Austrian army, so that the Ministry of Defence will be particularly affected.

The readers can download the proposition of guardianship in JPEG or PDF format and form their own opinion. 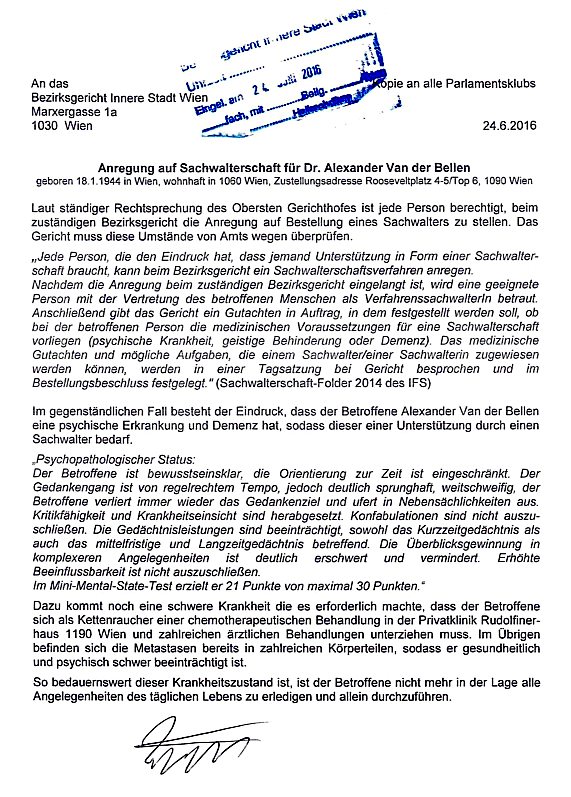 A big thank-you to JLH for translating the text of the legal document shown above:

To the District Court of the Inner City of Vienna
Marxergasse 1a
1030 Wien
Copy to all parliamentary groups
June 24, 2016

According to consistent case law of the supreme court, any person has the right to submit a proposal for the appointment of a guardian in the appropriate district court. The court must officially examine these circumstances.

“Any person who has the impression that someone is in need of support in the form of a guardianship, can propose a guardianship procedure in the district court. After the proposal is received in the appropriate district court, a suitable person will be entrusted with the procedural guardianship of the person in question. Subsequently, the court issues an evaluation, in which it shall be determined whether the medical prerequisites for a guardianship (mental illness, mental deficiency or dementia) are present in the person in question. The medical evaluation and possible tasks which can be required of a guardian will be discussed in the court on a date set and confirmed in the decision.” (Guardianship folder 2014 of the Social Services Institute)

In the present case, there exists the impression that the person concerned — Alexander Van der Bellen — has a mental illness and dementia, and therefore requires support by a guardian.

The person concerned is responsive; his focus at this time is limited. His line of thought is regular in tempo but clearly erratic, circuitous. The person in question repeatedly loses the thread of his thoughts and concludes in irrelevancies. Critical faculty and understanding of the disease are degraded. Confabulations cannot be ruled out. Cognitive performance is impaired, affecting both short-term memory as well as intermediate-term and long-term memory. The ability to achieve an overview in more complex matters is clearly impeded and diminished. Heightened suggestibility cannot to be excluded.

In the Mini-Mental-State Test, he scores 21 points of a maximum possible 30 points.”

In addition to this is a serious illness which made it necessary for the person concerned — a chain smoker — to submit to chemotherapy in the private clinic, Rudolfinerhaus 1190 Wien, as well as numerous medical treatments. Apart from that, there are already metastases in several parts of the body, so that he is impaired both in health and psychically.

However regrettable this condition of ill health is, the affected person is no longer capable of managing all the affairs of daily life alone.

39 thoughts on “Is the President-Elect of Austria Mentally Incompetent?”