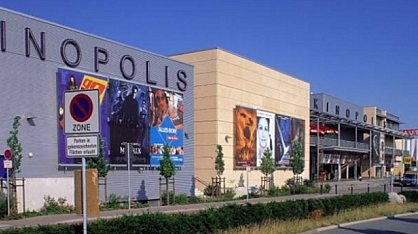 This afternoon a man carried a collection of weapons into a movie theater in the town of Viernheim in South Hesse. He took about fifty hostages before eventually being shot and killed by special operations police.

The incident has all the earmarks of a culture-enriching celebration of the 17th Day of Ramadan — the late perp had an explosives belt and spoke broken German — but the German police have put an embargo on all further information about him, so we don’t know the Mohammed Coefficient of the case, nor much of anything else.

Nash Montana has translated two brief articles about what happened at the Kinopolis movie theater in Viernheim. First, from Politically Incorrect:

About 2:45pm a masked and, according to witnesses, heavily armed man with an ammo belt stepped into the Kinopolis at the Rhein-Neckar Center in the South Hessian town Viernheim.

The perpetrator fired off a few shots, then sought a secure spot and held about 50 people hostage. The area around the location was blocked off by police, who also used helicopters. A short time later the SEK, the Sondereinsatzkommando der Polizei [Special Operations Commandos], stormed the theater and shot the perpetrator, as the Hessian ministry of the interior has confirmed.

There are about 25 injured people, but most likely their injuries resulted from teargas. Any specific information has been held back since the beginning of the operation. Also a gag order was immediately imposed.

And from the Frankfurter Allgemeine Zeitung:

Who is the hostage taker from Viernheim?

The police have successfully averted the danger of an armed man in the Kinopolis theater complex. The man was shot. According to information the guns were ‘alarm guns’ (fake). Now his identity is being established.

A man was shot at a special police intervention in the South Hessian town of Viernheim. Towards 2:45pm an emergency call was made to the South Hessian police station, to the effect that a masked and armed man was seen at the Kinopolis theater complex.

Apparently he had threatened employees with a machine gun, then fired four shots, and entered the fully occupied theater. According to a young cinema employee who activated the silent alarm, the offender was 18 to 22 years old, and about 1.75 meters tall [5’ 8”].

He created a somewhat confused impression, the Hessian minister of the interior Peter Beuth (CDU) said. Four shots were fired, and hostages were also within the “influence area of the offender”, according to Beuth’s information. From what has been found so far, the attacker’s weapons were fake guns. Of the approximately thirty people in the cinema, nobody was injured.

Nobody could give any information about the identity of the offender so far. He didn’t carry any ID papers. There is no hint of an Islamic background, the police said. The motives have to first be determined, as soon as the identity of the man has been established. The office of the district attorney in Darmstadt and the Hessian regional Office of Criminal Investigation have picked up the investigation.

Special police forces from Frankfurt were on location within a very short time. Apparently they were flown to the site via helicopter. When the police entered the theater, the attacker was killed. Towards 6:00pm the operation was over.

The police have established a gag order. One hospital in Darmstadt announced that they had activated their emergency plan. They were prepared for multiple injured people.