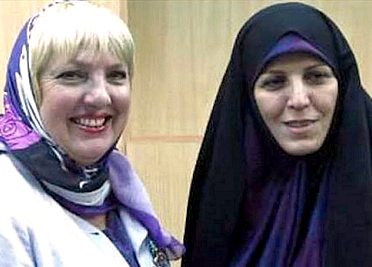 The following article describes the dhimmi behavior of German women prior to a business junket to Iran. It was originally published at the German feminist website EMMA.de. Many thanks to Egri Nök for the translation:

For the brochure of a German business delegation trip to Iran, a majority of women traveling has veiled voluntarily. The Iranian women have no choice: they have forcedly been veiled for decades. About a wrong signal, that actually was not even supposed to have become public.

The “Common economic delegation of the federal states of Mecklenburg-Western Pomerania, Saxony and Saxony-Anhalt” to Iran currently provides material for discussion. About 100 representatives from business and politics traveled to Tehran and Isfahan last week. In their luggage: a 76-page information booklet about the participants. Eight of the twelve women wore a veil — from colorful scarf up to the Islamist headscarf. Of all things, six of these veiled women are the official representatives of the federal states: Andrea Katharina Herrmannsen (photo, left), head of the State Chancellery Mecklenburg-Vorpommern; or Barbara Meyer (photo center), Head of the Saxon State Ministry for Economic Affairs, Labour and Transport.

The brochure was to be distributed only in Iran. But it has found its way onto the internet via the Facebook page of the Tehran Chamber of Commerce. This explains Steffen Wehner, spokesman for the Ministry of Energy, Infrastructure and Regional Development in Mecklenburg-Vorpommern, who also took part in the trip. Schwerin [capital of Mecklenburg-Vorpommern] provided the impetus for the visit to Iran.

It simply had “a practical background,” said Wehner, that the brochure shows veiled women from business and politics. A woman who applies for a visa for Iran must wear a veil on the passport photo for this visa, informs the Foreign Office concerning the conditions for entry to Iran. And these photos then just wandered into the brochure. “There was no prior political debate on the question of how the women are shown”, at least according to Wehner. Finally, it was stated that an information brochure of this type is not meant to be “ a political statement.” and instead, “only a business card the company leaves in the country.” But: this is precisely the problem.

For 40 years, Iranian women have been fighting against compulsory veiling in the theocracy — with their lives. In recent years, particularly pressing and courageous. Campaigns such as “My Stealthy Freedom” prove it: Thousands of women posted photos as they secretly removed their veil in Iran. Just recently eight Iranian models were arrested who had posted photos on Instagram showing themselves unveiled. Their whereabouts are unknown. At the same time Tehran’s police chief announced that the uniformed Ershad patrols that arrest all women dressed “anti-Islamic” would be increased by 7,000 plainclothes police.

When the Green Party politician Claudia Roth [in the photo at the top, on the left] travelled last year with a headscarf in Iran, Iranian women wrote a protest letter: “Dear Claudia Roth, ask our country to respect human rights — including the freedom to decide whether a woman wants to be veiled or not! And do not unnecessarily wear a headscarf in a country with compulsory veiling.”

Today, a year later, the course is set for new economic and social turnout in Iran. Ever since the economic sanctions were lifted, Iran has been a trendy country. Especially for politicians and entrepreneurs who see the great deal. Economy Minister Gabriel was the first to visit the theocracy a year ago. Foreign Minister Steinmeier this spring traveled to Tehran and invited the Iranian President Hassan Rohani, “on his next trip to Europe to consider Germany as destination during his visit” (to the displeasure of the Chancellor).

The planning of the trip to Iran was probably not completely without debate. Ines Massih-Richter from the Office of Foreign Trade in the Investment and Marketing Corporation Saxony-Anhalt was responsible for organizing the delegation of its State. “The topic had occupied me for weeks, and it was difficult for me to wear the headscarf in Iran,” says the EMMA-reader. In the end she took the liberty to submit a photo without a headscarf at least for the brochure — for herself but also for women in Iran. “It is different if, when I get out of the plane in Iran, and then have to wear a headscarf because of the legal requirements in the country — or if I print a brochure here that is supposed to represent women in Germany,” she says.

The discussions with the Iranian entrepreneurs left Massih-Richter “very impressed”, by the way. She recalls she “did not notice” that in those talks the scarf slipped off of her head. Not until she was back on the street in Tehran, and an Iranian businesswoman came to her and said politely: “We are outside now — I think it is better if you put your scarf on again …”