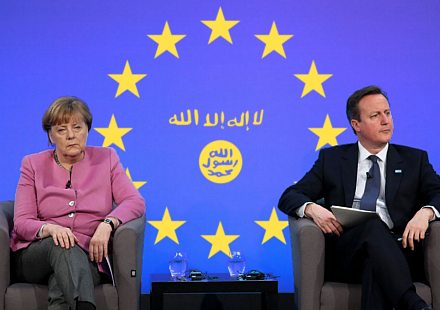 Tomorrow morning, the 17th day of Ramadan, British voters will go to the polls in a referendum on whether or not the UK will remain in the European Union. Sad to say, the wind seems to have shifted in the direction of Remain, so that after June 23rd the people of the United Kingdom will enter a permanent state of serfdom. From Friday on, the good peasants of Albion will have to tug their forelocks in perpetuity to the Lord of the Manor in Brussels.

Paul Weston of Liberty GB did another radio “interview” today, with an outfit called talkRadio. No one has ever spoken to these “journalists” like this before and they seem unable to handle it.

For some reason the interviewers don’t even seem to be ashamed when they know they have no argument. Their psychology must be very interesting…

Note: After the first few minutes, this interview gets VERY interesting:

Paul Weston is a British-based writer who focuses on the damage done to Western Civilisation by the hard left’s ongoing cultural revolution, which seeks to destroy the Christian, capitalist and racial base of the West. He is now one of the leaders of PEGIDA UK, and is also the leader of Liberty GB. His website may be found here, and his political Facebook page here. For links to his essays, see the Paul Weston Archives.

38 thoughts on “Countdown to Serfdom”