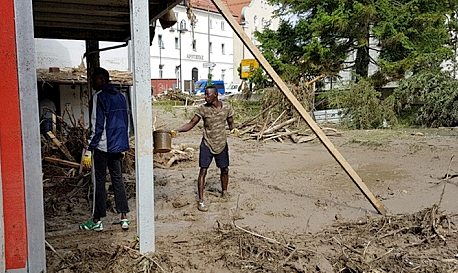 Last week parts of Europe were hit with torrential rain. As a result, mountainous areas in Bavaria and Baden-Württemberg in southwestern Germany experienced severe and widespread flooding. The video below will give you an idea of the extent of the damage:

In the wake of the floods, German media presented photos and video footage of asylum seekers helping with cleanup efforts. There’s only one problem: the supposed altruism by migrants was actually staged for the cameras by refugee aid groups, possibly in collusion with the local authorities. 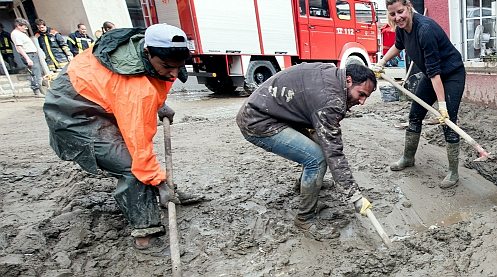 Simbach — residents cleaning up after flood

Egri Nök has translated several articles about the phony cleanup efforts by refugees. First, from Schwäbisch Gmünd, as reported by the Rems-Zeitung:

Embarrassing Flood Staging with refugees in the Weststadt [Schwäbisch Gmünd]

A “help effort” by refugees, staged by the municipality at the request of a foreign camera team, sparked outrage among residents and flood helpers in the Weststadt [a district of Schwäbisch Gmünd], which is still marked by the flood.

The aid became a satire, as several eyewitnesses, independent of one another, described to the Rems-Zeitung, seeking help also in the interests of the obviously “abused asylum seekers”.

Despite the massive irritation, all observers emphasized that they truly pitied the refugees in this situation. They quickly tried to provide work gloves for the men who apparently did not even know what this all was about. They were sent, equipped only with light casual wear and sparkling clean sneakers, and cheerful music from iPhones, and escorted by municipal staff (witness: “tie-wearers”) to the flood cleanup in the Eutighofer Street, where their help was basically not needed anymore. “All of us did not believe our eyes about what was suddenly happening,” says the stunned RZ reader Wolfgang B. Many other citizens of Weststadt also indignantly approached the Rems-Zeitung about this “initiative for show by the town” on Thursday, and even showed videos from their mobiles of this unbelievable satire.

Allegedly the disgruntled residents were about to chase the camera team from a house and garden because of this strange move. The refugees were even forced to fetch back from the containers flood trash that the residents had salvaged long before, to again carry it out of the basements, with an eye towards the media. The citizens were so outraged that, according to reports, there were fisticuffs against the foreign camera team.

The town hall press spokesman Markus Herrmann reassures: This action was indeed unfortunate. He asks for understanding: the camera team from Austria had arrived too late, and one had only intended to reenact for them that the refugees indeed supported the flood victims. The indignant residents of the Weststadt, however, do not know of any such support. Rather, they felt quite on their own until Wednesday.

According to reports, real helpers were not put in the spotlight like the unfortunate refugees, who, a few minutes after their TV appearance, took to their heels. The clear opinion of many flood victims of the Weststadt: Perhaps well-intended by the Lord Mayor, but nevertheless absolutely out of order, this weird initiative.

UPDATE: The ORF (Austrian public TV) partially denies town spokesman Hermann’s account to JF. An ORF spokesperson confirmed that he did send a camera team to Schwäbisch Gmünd. However, it was not involved in the staging. It must have been a different station. Town spokesman Hermann was not available anymore at Friday noon to clarify which TV station it actually was.

Update 2: Press release from the town of Schwäbisch Gmünd, June 3:

Regarding the Media report about a flood piece by a TV team in Schwäbisch Gmünd, the municipality makes it clear that the Gmünd town leadership did not instruct a media staging

Schwäbisch Gmünd (sv). The shooting by a camera team after the storm disaster caused irritation among residents in the Eutighofer Street in Schwäbisch Gmünd. Regarding this, the town administration provides this clarification:

The team had arrived late for the shooting after the storm disaster. As the largest amount of the acute assistance o the night of the disaster and the following day had already been completed at that point, the TV journalists asked to re-enact a few assistance scenes at the access road to town, where the film team found furnishings affected by water damage that still remained. A wish was expressed to specifically film refugees, as they had lent a hand on another occasion in the previous days. At this request, staff from Gmünd refugee care connected with refugees. There was at no point any instruction by the Gmünd town leadership, especially not by Lord Mayor Richard Arnold, to stage an enactment. The Lord Mayor and the department heads were not informed of this shooting and of the request by the camera team, and would not have had the opportunity, the desire, or the time to occupy themselves with details of a media request in the commotion of these events and days.

Egri Nök summarizes media reports on a similar incident in Bavaria. This one has an unusual twist:

A group of asylum seekers protested their move by refusing to leave the town square in Bergen im Chiemgau in Upper Bavaria from Wednesday to Friday. On Friday and Saturday, volunteers drove them to stage helping with the flood in Simbach am Inn in Lower Bavaria, which was devastated by an unprecedented flood earlier this week.

The asylum seekers had been staying in a hotel with full amenities right in Bergen center. A costly solution, that southern German communities had to choose (and pay for), since they are so overrun with refugees. The community organized a smaller house in Waging am See, directly at the lakefront, and renovated it for €100,000. The refugees refuse to move, because, they say, it is a walk of 30 minutes from the new location into the town center: 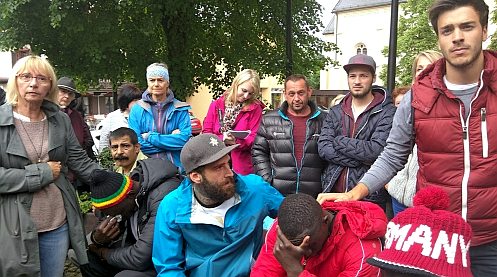 Refugees refuse to move from Bergen to Waging — in tears

“They simply do not want to be sent into isolation, outside town, no human contact within kilometers, … so they prefer to sit in the town square, until a different, more humane, solution is found” (Statement by the “Helper Set Bergen”, cited from Bayerischer Rundfunk).

Germans actually pay good money to stay in Waging am See for holidays.

The asylum seekers refused to enter the bus that was supposed to take them to Waging am See and instead squatted on the town square in Bergen. 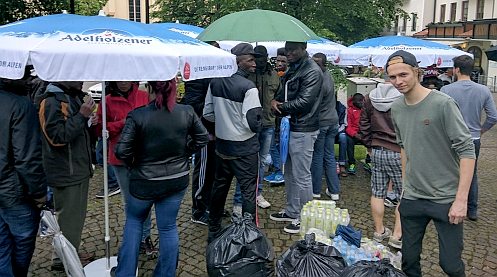 12 thoughts on “A Potemkin Flood Cleanup in Germany”