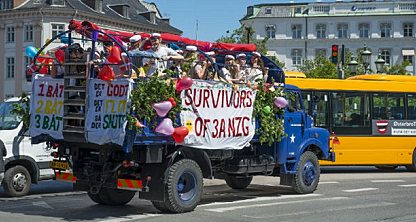 Young culture-enrichers in Denmark are increasingly disrupting a traditional Danish graduation custom by violent attacks on high school students who visit the homes of graduates.

Many thanks to Tania for translating this article from Den Korte Avis:

Everyone is familiar with the sight of open-bodied trucks filled with noisy happy students. It is a Danish tradition for high-spirited students to drive around and visit individual students’ homes on the day they don their graduation caps.

So it was with a class from Ørestad Gymnasium. But a day that began with celebration and joy was turned into something of a nightmare when a group of immigrant men attacked the vehicle, launching various “missiles”.

It happened in a Hørgården tenement on Amager, where many immigrants live. Here Mohamed also lives; he was one of the students on the truck.

A group of migrant boys and young men had planned an attack. In a video you can see how the waste containers were rolled out on the road to block the vehicle while students were inside at Mohamed’s family’s apartment. Watch the video here.

The driver, Brian Brandt, who stayed down by the truck, said he could see a group of youngsters with eggs, water balloons and cooking oil gather together on a nearby lawn. More and more people came to join them.

As the students came down the street one of the immigrant boys stood ready with a bottle of cooking oil, which was shaken and then sprayed over them. Then the rest of the group began to bombard the students with water balloons, eggs and flour.

Brian Brandt, who has been driving these student parties for 20 years, says he has never experienced anything like it.

“It was a shock to see the behavior of these young men. All the attackers had an immigrant background, and they were totally indifferent to what I said to them. At one point I was afraid that they would smash the truck,” says Brian Brandt to Ekstra Bladet.

He quickly tried to get the truck quickly away from the narrow Bryde Alley, but it was difficult, as the road was blocked by containers.

“They barricaded themselves and were ready with eggs by the containers, so I chose to back out. But when I get a ways down the road, I encounter other vehicles,” says Brian Brandt to Ekstra Bladet. These can also be seen on the video.

One of the students in the truck was Stina Marie Carlsen. She tells about the experience which for her was a huge shock:

“I notice that a crowd of about 20 young people start to congregate around the truck, but don’t otherwise think anything of it. When we get up into the back of the truck, they suddenly began attacking us and throwing eggs and oil and flour. Several of my classmates begin to pull some carpets off the pallet tables that were in the middle of the vehicle, while the others pulled banners from the side of the truck in an attempt to use these as protection,” says Stina Marie Carlsen to BT.

“I was beginning to think about how to get away from there, as the driver could not drive anywhere. Imagine if they came up to us in the wagon! At the same time it was really disgusting to feel egg and flour running down my head and my back. I was completely soaked afterwards and it stank terribly,” she says to BT.

Stina Marie Carlsen was afraid that the rest of the day would be ruined and the student run canceled as the truck was completely covered in eggs and oil after the attack.

The trip, however, was completed, although only with effort.

“I had to shower a total of three times during the rest of the trip because I could not get the smell of eggs and oil away. At the same time I kept finding eggshells in my hair. My mother had to come with a change of clothes for me, “says Stina Marie Carlsen to BT.

Mohamed: It was just for fun – Police: We take it very seriously

Mohamed El Ar Bagi tells EB, that it really was for him the eggs were intended, and that the throwing of eggs after students had been a tradition in the area for some years, he says.

“But this time they may have gone too far. But we just laughed and blotches of egg on my student cap is only a dear memory of the day,” says Mohamed.

Others are also trying to downplay the attack. They’re just little boys, they said. But on the video you can see that they are big guys.

Others also have a completely different assessment.

The driver says it was like a war zone in Beirut.

One of the residents calls what he saw a commando raid.

And the police have received at least five reports on the matter. They had officers in the area for several hours. And the constable in charge said that they are taking the matter very seriously.

A Danish tradition on its way to being destroyed

The attack on the students may well be a warning sign that a good Danish tradition may be on the way to being destroyed.

Mohamed said that the eggs are a tradition in the area. Amongst immigrants that is.

But it is apparent that it is not only in Hørgården on Amager that this is happening.

In Valby another vehicle from Ørestad Gymnasium came under attack.

“Five young people suddenly began to throw rocks at us when we were leaving. We drove toward a traffic light, and they followed us and waited for the truck to stop at a red light. There they threw rocks at us, and one of them hit me right on the head, says the graduate Manon Pignot to TV2 Lorry on the 26th.

At Husum Station in Copenhagen two female students were sprayed in the eyes with acid during their student drive on Friday. The liquid was apparently sprayed with a water gun from a car. It sent the two girls to the hospital, where they had to endure an almost two-hour-long rinse treatment. [Elsewhere in the news I have read that they had damage to their corneas. — Translator]

Soren Elkrog was a driver this past Friday on a student truck. He saw four immigrants throwing eggs at the vehicle. They had no connection with or relationship to any of the students on the truck.

Another team of students had eggs thrown onto them on their truck, says a group of HF students from VUC in Hvidovre Sunday evening to Ekstra Bladet.

It happened at Naver gate in Avedøre and the road leading to Avedøre Station. It is an area inhabited by many with immigrant backgrounds.

Around 4-5 big guys threw eggs at the 25 students on the truck.

They were waiting for us, says Steven Button, who sent photos to Ekstra Bladet.

And last night came a description of Nørrebro (on FB), where smaller immigrant boys threw water balloons at a group of students. It was later taken off FB due to disagreement with the comments written.

Ekstra Bladet, BT and the police all talk about other examples of the same thing happening – albeit apparently not so violent.

It is feared that the attacks will spread as the number of those with immigrant background become students.

The attacks often hit all the students on a truck.

There is much violence in everyday life amongst immigrants in Denmark and in other European countries.

It is possible that the reason for this particular attack was Mohamed. But the reality was that serious violence hit all the students present on the truck.

Finn tells us that he heard shouts of “Nak dem alle” (get all of them).

A Danish tradition may be under attack, and it can be gone before we know it.

25 thoughts on “A Culturally Enriched High School Graduation in Denmark”