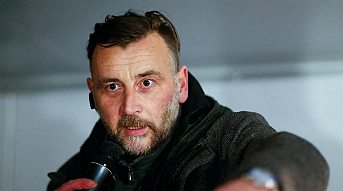 Lutz Bachmann is one of the founders of PEGIDA Dresden, the original source of the PEGIDA movement in Germany. In a case that has strong parallels with that of Tommy Robinson, Mr. Bachmann has been put on trial for political reasons. Unlike Tommy, however, Mr. Bachmann has been tried and convicted for political speech — his statements about immigrants made in a closed group on Facebook.

A double standard is in evidence in the case, because Vice President Sigmar Gabriel of the German Federal Republic has used even harsher and more insulting words against right-wingers, yet he faces no legal sanctions, because he is a lefty and his targets are not members of a protected group.

Below are three videos and an article related to the case. Many thanks to Egri Nök for these translations, and to Vlad Tepes for the subtitling. The first video is a brief news report about the first day of Lutz Bachmann’s trial:

A news report on the second and final day in court:

Egri Nök has also translated an article from Die Welt about the verdict (the translation was published earlier at Vlad Tepes in a slightly different form):

Lutz Bachmann, a co-founder of Pegida, was sentenced to a fine of €9,600 ($11,500) for “Volksverhetzung” (incitement of the people/hate speech) by the district court Dresden on Tuesday May 3.

The co-founder of Pegida Lutz Bachmann has been sentenced by the district court Dresden for “Volksverhetzung” (incitement of the people/hate speech) to a fine of €9,600o (or 120 daily fines of €80 in lieu of jail time). The head of the Islam- and refugee-critical association is said to have denigrated refugees, and to have incited hatred towards them, in his comments on Facebook.

The 43-year-old, who has a criminal record for theft and drug distribution, denied that these comments were made by him. The prosecution demanded a jail sentence of seven months; the defense pleaded not guilty. Tuesday’s verdict is not final yet.

On Facebook, Pegida asks everyone to read an article at Epoch Times which, Pegida said, had the facts. But it is a bit disappointing.

All the article on Epoch Times said was that Bachmann was accused of having made comments in a closed Facebook group, before he became the front man for Pegida, calling refugees “Vieh” (cattle) and “Gelump”. The epoch times article left it that vague. When precisely? what group? what was the context and who reported him, etc. — all these things one might like to know, they don’t say.

Maybe because the verdict isn’t final yet?

My English dictionary says “rubbish” for “Gelump”. But that is not a literal translation. The word Bachmann used literally means something like “old stuff that lies around collecting dust in an attic”, and it is certainly condescending, but really more old-fashioned than actually offensive.

It is interesting in contrast that recently the vice president of Germany, Sigmar Gabriel (Social Democrats) famously called people who are against refugees “Pack” (low life/vermin).

Bit of a double standard there.

The following video, also translated by Egri Nök, shows Vice President Gabriel referring to people with whom he disagrees politically as “vermin”:

7 thoughts on “Vermin on Trial in Dresden”