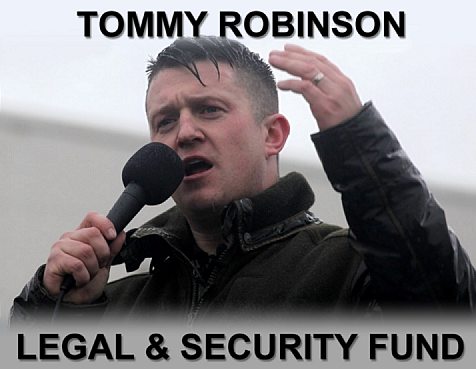 A permanent fund to assist Tommy Robinson has now been established. Its purpose is to help provide the best possible legal defense for Tommy in the event the British state comes after him again, and to help pay for bodyguards and other security measures to protect Tommy and his family from those who would do them harm.

Prior to his trial on April 14, a drive to help him with his legal defense was launched. It was successful: thanks to the donations to his defense fund, a QC (high-level British legal counsel) was retained, and the case against Tommy was dismissed when it came to court.

Elsa of West in Danger says:

So many thanks to those who gave to help Tommy escape one huge immediate danger. It’s the generosity of over 1,000 people, worldwide, that paid for the top notch legal representation that allowed Tommy to walk free.

And thanks to the West in Danger, Tommy’s supporters can now donate in several ways to help him defray his future legal and security expenses.

There are several reasons why Tommy’s financial situation should be of concern to those who support him.

The Crown Prosecution Service has said it may seek a review of the judge’s decision ( See the IB Times). If that happens, Tommy will have to go to court again.

As most of you know, Tommy’s bank account was frozen again for a while last month. It has been unfrozen since then, but the fact that it can be frozen at any time at the whim of the government shows that Tommy cannot rely on being able to access his account to fund his legal defense — or anything else.

Furthermore, after the case against him was dismissed, Tommy was physically attacked by a Muslim in his home town, Luton:

The above examples illustrate the reasons why this fund was created. The monies collected via these donation pages are held in trust for Tommy and will be used to cover legal and security expenses, which will paid out directly to those who provide services to defend or protect Tommy and his family.

There are four ways you can donate to help Tommy:

Monthly donation (only in UK currency)

The donor chooses the amount, and can change it or cancel at any time.

(A currency conversion table is below.)

Or you can make a one-time donation

Conversion table from sterling to other currencies:

Another way to help Tommy is to buy his book, Enemy of the State, either in print

The four methods of donating to Tommy’s fund have been set up as buttons on our sidebar. They will remain there as long as the fund is active, and we’ll refer to them in future if additional legal action against Tommy is undertaken by the British state.

Many thanks to West in Danger for setting up this fund.