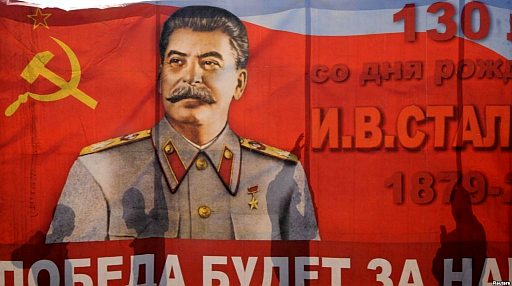 Well, we’re past the midweek hump of our quarterly fundraiser and rolling down the far side.

The pace has picked up over the past 48 hours, and we owe a big thank-you to all the dedicated readers whose generosity came out in full force. That includes quite a few from the Western Rifle Shooters Association — I can tell by the ornery places they come from in the South, West, and Southwest of the country. They’re ornery enough to put aside their firearms for a few minutes and come over here to the Counterjihad side of things to make the tip cup clink. Hi, guys! Good to see you here.

Real thank-you notes are starting to roll out, too. But that will take a while, given how many we have to write. Last time I got so far behind that it took me about six weeks just to write all the thank-yous for the donations that came in during the Fundraising Octave. I’ve vowed to do better this quarter — a little late for a New Year’s resolution, but still…

The theme of this week’s fundraiser is May Day, with a special emphasis on the socialist festivities that surround the celebrations on the first of May. We’ve been focusing on the Soviet Union because that’s where I drew the iconography from for the post headers — you can’t beat the USSR for snappy May Day graphics.

The image at the top of this post features a venerable depiction of Iosif Vissarionovich Dzhugashvili, a.k.a. Joseph Stalin, who ruled the Soviet Union with an iron fist from the late 1920s until his death in 1953. The image is old, but the occasion of its display is recent — as far as I can tell, the banner was being held aloft by Stalinophiles to celebrate his 130th birthday in 2009, possibly on May Day (although Stalin’s birthday is in December).

Stalin is revered by a significant percentage of Russians, and remains popular in other parts of the former Soviet Union, including his native Georgia. Although probably not in Ukraine, I would guess.

For the rest of the Socialist diaspora, Mr. Dzhugashvili does not rate as a high a place in the pantheon of beloved Communists. Not like Mao, Trotsky, Che, and Ho Chi Minh. Even Lenin enjoys a modicum of respect abroad. But Stalin? Well… The Gutmenschen in Ann Arbor and Berkeley would generally rather not discuss him. Yes, yes, we know you can’t make an omelet without breaking eggs, but why so MANY? Real Communism has never been tried, and now it never will be, because Stalin ruined the brand. More’s the pity… 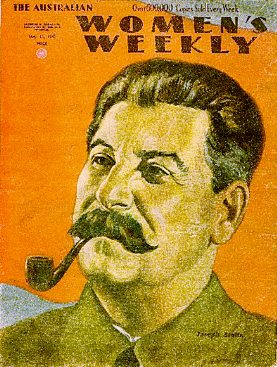 For a brief time — from 1941 to 1946 — Stalin was our beloved Uncle Joe, that calm, smiling benign fellow who was our staunch ally in the war against Hitler. We knew he got a little overzealous when dealing with his political opponents, but, hey — it was wartime, and besides, conditions in Russia were very different than they were in the Western democracies. We had to cut him some slack. 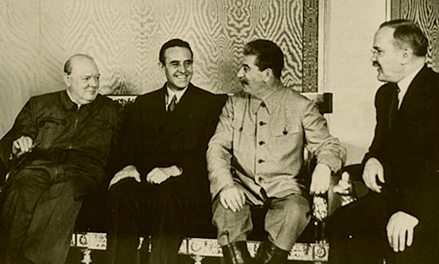 We had our reckoning with Nazi crimes after the war, during the occupation and de-Nazification of Germany. But any reckoning with Stalin and Communism had to be postponed until after the Cold War.

Four decades later, when the Wall came down and Communism was tossed onto the garbage scow of history —that’s when we should have had our reckoning with Stalin’s crimes. But we didn’t. George H.W. Bush declared the New World Order, we reached the end of history, and then marked time until Osama Bin Laden strode onto the world stage to strut and fret his hour.

Stalin should have earned his rightful place alongside Hitler as an icon of ultimate evil. His face should be loathed and spat upon. Godwin’s law should be invoked concerning his name, just as it is with Hitler’s. Politicians should excoriate their opponents and liken them to Joseph Stalin in their callous disregard for the welfare of their constituents.

But none of that happened.

It was easier for us just to forget about what Communism had done. We turned it into kitschy consumer items and trendy fashion wear. Che T-shirts and red star berets and all that other swell stuff.

And it was especially easy because Stalin had moved West.

Quietly and imperceptibly, via the successful infiltration of Western governments and institutions, the spirit of Soviet Socialism worked its way into the fabric of Western life. What is now known as Cultural Marxism or Political Correctness was the result of that infiltration. The long march through the institutions took sixty or seventy years, but it was very successful.

In the West, socialism slowly took control of the machinery of the state and the culture from the inside, rather than by violently overthrowing it. The suborning of the mass media and the academy created a level of social and political control that Stalin could only have dreamed of. And all done without violence, by the power of the purse and the pressure of social conformity.

When the USSR fell, money and instructions stopped flowing from the Kremlin to the comrades in the West. But the comrades have remained good little comrades to this day.

If Stalin were alive today he’d want to sit down and talk shop with Barack Hussein Obama over a tureen of borscht and a samovar of tea.

“Joe, my good buddy, I can give you a few tips about how it’s done. Forget the gulag — you don’t need that. Just make sure you control the world’s reserve currency. And you need a printing press. And CNN. And MTV. That’ll keep the lumpenproletariat on the straight and narrow. Pass the caviar, would you, tovarisch?

We Americans needed Russia to remain the enemy after the Cold War, and that’s the way it turned out. But with the demise of the USSR, we couldn’t continue our Machiavellian machinations against the Russians openly; they had to be hidden by a scrim of lies and misdirection. Now we have to pretend that we are full of zeal for democracy in Ukraine — that we’re not sticking a knife into Putin’s underbelly or trying to break his stranglehold on the supply of natural gas to Europe. No, we’re idealistic and pure of heart!

The above applies regardless of any evil things Putin does. He is who he is — he doesn’t have to be a saint to prove that our foreign policy is a foolish, wrongheaded catastrophe.

In a recent comment Col. Bunny expressed it best:

It’s odd, too, that now it is not Russia’s foreign policy that alarms me but the US one. It’s every bit as cynical and sinister as the old Soviet one, especially as it’s wrapped in five layers of lies. I think the absolute Soviet maximum was three.

We support ISIS and Al Qaida in Syria in league with the Saudi Wahhabists to depose (and kill?) the man who’s obviously, hands down, the best leader who respects minorities and shows magnanimity to former enemies. An obvious mortal enemy.

And there are tens of thousands of US troops 10,000 miles from home but not one on our southern border across which we’re being invaded.

All of this takes place at the direction of a mystery man with less papers than a pedigree cocker spaniel and who started his political career in the living room of two communist terrorists, had a communist for a mentor, and has as his closest advisor a woman whose father, grandfather, and father-in-law were communists. Oh, and whose political Bible is a book dedicated to Satan.

When the Soviet Union imploded I said in front of witnesses that we would come to long for the stark simplicity of the Cold War. Now the post-WWII paradigm of a healthy, powerful, decent America is crumbling and a new wind is filling the sails of Mr. Trump. To the great consternation of the Politburo.

Ah, yes, that tall ship with Donald Trump at the tiller! But how is he tacking? What sort of zigzag course is he plotting? And to what destination?

Yesterday Mr. Trump appointed a veteran of one of George Soros’ fund management operations as the national finance chair of his campaign. He’s lying down with the dogs now — will he get up tomorrow with those Open Society fleas?

On that dyspeptic note, I’ll end this morning’s ramblings.

Far Abroad: Australia, Luxembourg, the Netherlands, and the UK

Many thanks to all of you. Dymphna will be back here tomorrow with more to say.

36 thoughts on “The Red Tide Flows From East to West”