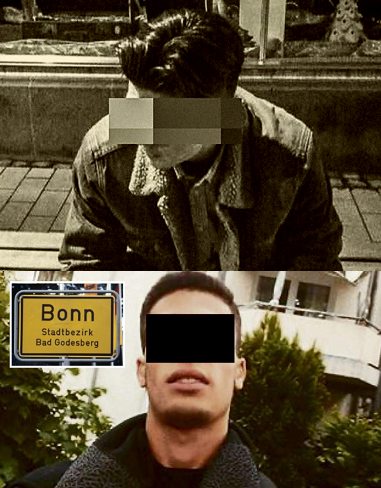 A young German named Niklas P. was brutally beaten to death earlier this month by a Moroccan named Walid S.

On Monday Politically Incorrect published an article about the murder of Niklas P., and about how other youths are coming forward from the same city, Bad Godesberg, about the increasing migrant violence that they have to endure.

Bad Godesberg: Niklas P. is not a single incident

After the racist murder of the student Niklas P. by the Moroccan Walid S., there are now other German youths who report similar experiences. What we of course have known for a long time finally sees the light of the day: Young people and adults are afraid of the evening hours, because in Bad Godesberg there are now several no-go areas: Rheinallee/Von-Groote-Platz (Rondell and Basteipark included), Kurpark and Friedrich-Ebert-Strasse.

5,918 criminal offenses, 237 cases of violent crime (murder and manslaughter, rape, robbery, dangerous and serious bodily harm). Street crime: 1,776 cases. Robberies are individually recorded (86). Very often incidents are not even reported, more specifically they are not being recorded by the police, so it’s only natural to expect that the actual numbers are substantially higher.

According to the spokesperson for the police, there are half a dozen intensive multiple offenders. They usually hang around in groups with other youths, they stand out, they’re loud and hang out at different places. “We keep an eye on them; they’re regularly approached.”

Niklas P. was buried with great honors in the cemetery of Burgfriedhof. Now other victims begin to talk: The case of Tim P. happened in the evening hours of April 15 by Rheinaue. What really happened there he only knows from what his friends tell him, namely that he was brutally beaten. First they slapped him, then the culturally sensitive thugs called in their “brothers” via cell phones as usual, and a massive beating, including kicking the victim’s head multiple times, followed, which led to serious consequences: the 18-year-old Tim spent 24 hours in the intensive care unit — with head and brain trauma and serious brain hemorrhaging. His school friends who were there called the police. The police came, left the friends alone, and went searching for the offenders. A second unit arrived at the scene; they took personal information from the young students, and put Tim and his two friends on the subway. Their explanation: So that he wouldn’t be attacked again. At the main train station Tim collapsed, and a mother of one of his friends brought him to the hospital, where he was diagnosed with massive head and brain injury.

Tim doesn’t go out in the evenings anymore: “What happened to me happens to others as well. I hear about these things.” All of Tim’s friends who were there feel completely defeated. Tim says, “I can’t quit thinking about it, I have these flashbacks.” His father says, “There always have been scuffles and disputes, and they’ll always be there. But the willingness to literally annihilate someone with the use of utmost violence, that is new.”

Of course there’s always the possibility of behaving like the 16-year-old American Brennan Adams. On his way home, he was followed by two “men”. When they were at a distance of two meters from him, he pulled a knife out of his pocket, flipped it open, pointed it in the direction of the two men, and then he ran. At home, Brennan’s mother called the police. “They just told me that my son should call the police the next time.” Shortly after Niklas P.’s murder, she again called the police to report the incident. And again, she was stalled, the police officer refused to take down her name, even though she tried to explain the situation in German [I assume she is English-speaking — translator]. The police said on May 20th that there was no police report on file from the family.

Andreas Baumann from the General Anzeiger conducts himself in the usual leftist manner: The murder of Niklas P. stokes fears, there can not be talk of no-go areas, even though there were for example shots fired twice within a year between rival street gangs. “In Frankfurt, Cologne or Berlin it is much worse.” Well, that is comforting to know.

Whether an offender has a migrant background or a long German pedigree really doesn’t play much of a role. But the question about the backgrounds could be important and helpful to know when people from migrant background commit a disproportionately amount of serious crimes, comparing their percentage within the entire population. This should have consequences for the work the police do as well as within the entire integration politics. The whole thing should be made more transparent, because without this transparency, prejudices fall on fertile ground.

At a recent city event upset citizens were criticizing that Bad Godesberg is getting an increasingly bad reputation among the public. That the city is seen as unsafe. The borough mayor and Islamism-appointee, Simone Stein-Lücke (CDU) contradicted these statements and gave a fitting Islamic recommendation: “Women shouldn’t be out and about in parks after dark anyway.” (Then there would be no Taharrush mass rapes like in Cologne and elsewhere in German cities.)

Pastor Picken has been rudely awoken from his sleep of the just, and he profoundly resumes: “There’s got to be something done now, otherwise what will happen is we’ll see massive protests and maybe even a radicalization in Bad Godesberg.” Chief Mayor of Bonn, Ashok-Alexander Sridharan, CDU, himself a man with migrant background, commented, “The goal is to sensitize these young people to each other, so as to avoid violent attacks in the future if possible.” Sitting at the same table will help sensitize the head-kickers. And when that doesn’t work, well, then the German youths will have to be sensitized, so that they learn to endure violence from other cultures. Merkel: “We have to accept migrant violence.” We can do that!

Whoever feels like a stranger in his own city with no right to speak up in Bad Godesberg can move away. The question is only, where to? Because the same kind of wretchedness that’s happening in Bad Godesberg takes place in all cities all over the country.

55 thoughts on “The Brutal Murder of Niklas P. Was Not an Isolated Incident”