I returned home a little while ago, and am currently catching up. More than 1,700 emails were waiting for me when I got here. About 85% of them were spam, but that still leaves me a lot to go through.

The following photo drew my attention, via the comments that came in while I was gone (and also Vlad): 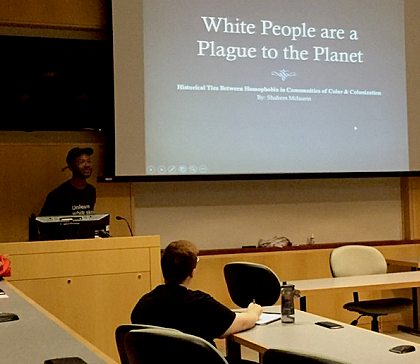 Two versions of the image seem to exist. Hypeline claims an “exclusive” on the story, but imgur has a copy of the photo that was posted the same day, and doesn’t have the watermark.

The imgur post says, “this was shown at UO today for a class”. UO could be the University of Oregon or the University of Ottawa. However, Hypeline and WCBM say the image is from Towson University in the Baltimore suburbs. The Twitter exchanges on it don’t specify the locale.

The young man who was giving the presentation seems to be named Shahem McLaurin. Based on this CollegeBound Foundation feature from 2013, I would bet on Towson, since Mr. McLaurin was hoping to get into Johns Hopkins University (which is in Baltimore) and the University of Maryland in College Park. So it looks like he didn’t make it into either of his preferred schools, and had to settle for Towson.

A dedicated internet sleuth at Voat/NeoFAG has discovered more information on Shahem McLaurin, whom he describes as a “gay activist”. There are links to Twitter (@Bmoreboy), Linked In, Instagram, and Pinterest.

That’s all I know at the moment about this brilliant young social justice warrior. If anyone has additional information, feel free to leave it in the comments.