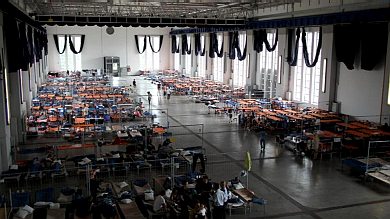 The president the Central Committee of German Catholics spouts so many absurdities that it is impossible to enumerate them. To paraphrase Mary McCarthy, every word Thomas Sternberg writes is absurd, including “and” and “the”.

According to Mr. Sternberg, we must not separate Muslims and Christians in the refugee shelters because that might give the impressions that Muslims can’t get along with other religions.

Many thanks to Egri Nök for translating this article from Die Welt:

Again and again there are reports of violence against Christian refugees in the shelters. Nevertheless, the Catholic laity warn strictly against accommodations segregated by faith.

The Central Committee of German Catholics (ZdK) strictly rejects a separate accommodation of Christian and Muslim refugees. The president of the Catholic layman’s organization, Thomas Sternberg, warned in a talk with Welt that it would send out a “disastrous signal”. Sternberg argues, if we “accommodate refugees separately by religion in our country, that would foster the impression that we are not capable of peaceful coexistence”. One should not “fuel the misconception that Christians and Muslims could not live together well.”

With this, the president of ZdK and North Rhine-Westphalian Christian Democrat deputy objects to the Christian relief network Open Doors. They published a study last week, according to which three out of four non-Muslim refugees reported they were being threatened, beaten, sexually harassed and insulted by Muslims for their belief in refugee shelters. This harassment affects up to 40,000 mostly Christian people seeking protection in Germany.

Steinberg argues that one must “be careful not to represent it as typical Islamic, when Christians are being harassed in mainly Islamic refugee shelters.”

After all, Christians had “for around 1350 years lived peacefully, albeit not with equal rights, in countries of the Near East with a Muslim majority population.”

To aid threatened refugees, the ZdK president instead recommends proceedings that are not oriented towards creed. “When refugees say they feel threatened, one should give them the possibility of finding shelter in more acceptable surroundings,” insists Sternberg. That was “the task of local helpers and politicians.”

17 thoughts on “Separate Christians and Muslims in Migrant Shelters? Never!”