JLH has translated a hostile MSM article about the recent AfD (Alternative für Deutschland, Alternative for Germany) convention in Stuttgart, and followed it with his own sardonic commentary.

From the STERN, which is a kind of wannabe BILD, an attempt to alert the Gutmenschen to danger forming on the Right. After taking some typical jabs (boldface and noted after the translation), the author seems more able than most leftists to perceive what is going on here, even if he sneers at it.

At its convention in Stuttgart, the AfD took up the question of power. The party wants revenge for the defeat suffered by the rightist and nationalist camp at the hands of the ’68ers.[1] 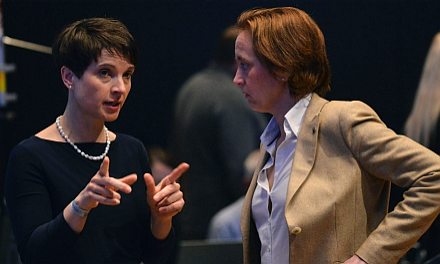 Frauke Petry and Beatrix von Storch at the AfD convention

AfD conventions are a special experience. Riot police by the hundreds, crowd control barriers, water cannons, plus the thrumming of police choppers permanently circling over the locale of the event. An atmosphere of civil war and street fights hangs over everything. There is a kind of justness in this. The party — which thrives like no other on being outcast, and not infrequently on resentment — feel themselves outsiders whenever they assemble, as on the weekend in an exhibition hall at the Stuttgart airport.

Is this party actually hoping for civil war? Probably not, for now, even if its lead warrior, Björn Höcke, likes to say that the AfD is “the last chance” before an uprising of the people against the hated elites in the partisan system and the media.

AfD Takes Up the Question of Power

However — The AfD is putting the question of power more aggressively than ever before. “Majorities can change” cried the chair, Frauke Petry, with a threatening undertone in the convention hall. That is the first insight to be gained from Stuttgart. Inspired by the successes of other right-populists in Europe, as most recently in Austria, the AfD sees itself on the wave of a new-right spirit of the times, which can eventually beach them somewhere where they will be able to move Germany on its axis to their own point of view. It no longer sees itself as a nihilistic party of disgruntled elderly row-house residents. They see themselves as on the way to the levers of power.

Second insight: This party has a tremendous, you might call it uncanny, vitality. When over 2,000 party members — not as is usual in other parties, previously selected delegates — travel here, to spend a full two days in a chronically overfull hall, arguing and voting about a program of principles. That — even if the contents of the program may often be repellent — is political engagement and direct democracy with a stamina and an intensity such as has not been seen in Germany for a long time. In Stuttgart, people could be found who had been thoroughly politicized in the process. There were many of them. They will not disappear quickly from the German political scene.

The third insight, and probably most important insight: This party’s issues will not fade. After the alleged “asylum hurricane”, they are calling Islam out, for “not belonging to Germany”.

The real, background theme of the AfD is: We want culture war. We want a different Germany. The hall as-good-as exploded when co-party chief, Jörg Meuthen shouted: “We want an end to the Left-Red-Green diseased ‘68er Germany.”

With that, Meuthen, like no other, identified the soul of the party. AfD is the organized attempt to reverse the historic, painful, embarrassing defeat of the bourgeois right and German nationalists associated with the leftist emancipatory movement of 1968. It wants a rematch.

The AfD is animated by the feeling of having since then been strangers in their own land. So every gender equality official, every leftist-tainted social studies teacher, every editorial with Red-Green sympathies attracts the contempt and fury of this party. The basic feeling of alienation toward the patterns of discourse and values left behind by the ‘68ers, which even Helmut Kohl’s “intellectual-moral turnaround” was not able to reverse, can vary infinitely in ever newer themes: from “gender insanity” to “multiculti”, from the euro to too many anglicisms allegedly endangering the German language.

The AfD Functions in West Germany as in East Germany

That is why AfD functions in West Germany exactly as in East Germany. In the West, AfD adherents have the feeling that the Germany they could believe they were brought up in, was taken away by the Leftist-Green spirit of the times without their opinion being asked. In the East, they have the feeling that they have never even really arrived in the post-68 Federal Republic.

Next year’s national election could be an exciting spectacle. The AfD wants a cultural revolution — from the right. And those who changed the country from the left will have to defend the changes. What a reversal of roles!

A Beginner’s Guide to Leftist Snark

What we on the left call “justice”.

Is this party actually hoping for civil war? probably not, for now…

But sometime in the not-too-distant future, they will spill out onto the streets waving their torches and pitchforks.

Cue slide show of Frederick Barbarossa, riding to an unjust Crusade against the peace-loving Muslims, and meeting a just end by drowning in a river in Anatolia.

with a threatening undertone

Fortunately, the tone gives it away, because the words don’t.

they will be able to move Germany on its axis

They almost seem to expect a “march through the institutions”.

It no longer sees itself as a nihilistic party of disgruntled elderly row house residents.

Send them back to their hovels!

After the alleged “asylum hurricane”

Yeah, it was really just an influx of warm air.

And if you will excuse me, I include the passage in italics, because I don’t think I’m the only who identifies with it in my own country.

The AfD is animated by the feeling of having since then been strangers in their own land. So every gender equality official, every leftist-tainted social studies teacher, every editorial with Red-Green sympathies attracts the contempt and fury of this party.

16 thoughts on “Moving Germany on its Axis”