The following essay and meme by Matthew Bracken were prompted by a cell-phone video from Germany of a culture-enricher assaulting a German teenaged boy. I won’t embed the video; I find it almost too unbearable to watch. To see a young man so unable to defend himself, so unwilling to stand up and be a man, is disheartening and dismaying.

Below are Matt Bracken’s thoughts on what all of this means. 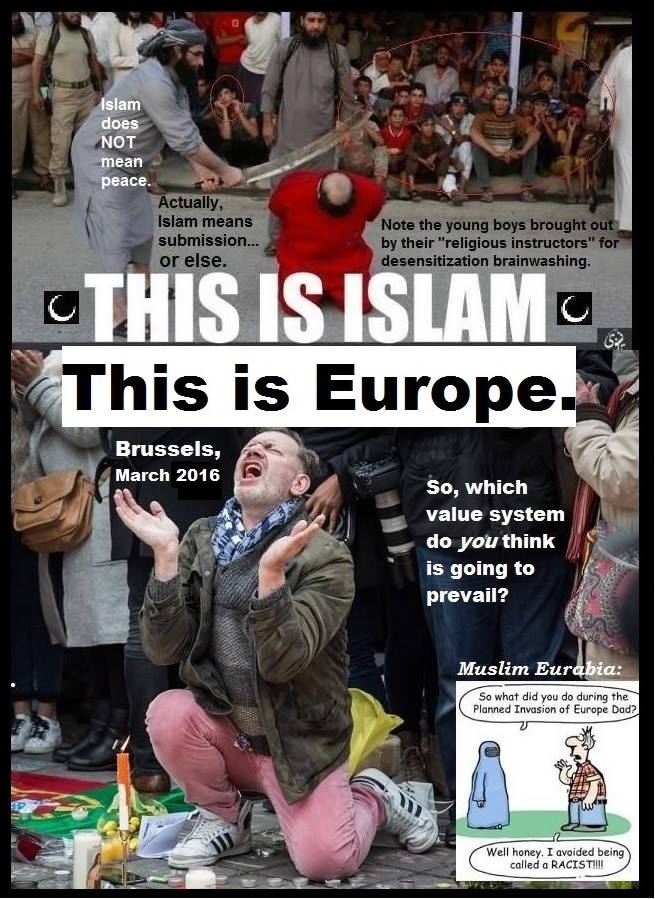 This is heartbreaking to see, but very important.

This is how a dhimmi is created in a gun-free country, where armed self-defense is an alien concept. This is prison yard rules, and the young German is just fresh meat. This German kid will probably convert to Islam just to stop the pain and “gain the respect” of his new masters.

Note how the bully threatens to beat him every day just to harden him up and make him a man. A similar psychological process occurs in military boot camp with new recruits. He doesn’t know it yet, but his mother and sisters are now Moslem chattel property. He won’t lift a finger to defend German women; he is a dhimmi at best. Most likely he will just convert as a matter of bare survival, but he will always be a “second-class Muslim”, even if he submits. These IslamoNazi bullies will have him reciting the Shahada in less than a month, and after that, his sister is toast. Just fresh meat for the hijra jihadis.

This is how Islam has spread for 1,400 years: brute force, threats, intimidation, and using terror as an example of how far they are willing to go to force the spread.

Smug Americans who own firearms might laugh at the current plight of the Europeans, but they should not. The Europeans have been brainwashed by the “multi-kulti-uber-alles” Left to simply submit when the planned hijra invasion happened, which is happening now. The ordinary Euros were betrayed by Quisling traitors in high offices. From the Muslim point of view, the hijra invasion is moving from the dawah (preaching) phase to the jihad phase, using violence and threats of even greater violence to force a complete Muslim takeover. That German boy now understands who are the alpha males, and who are not: The Moslems are, and he isn’t.

But there is the long-term danger in this process even to America. If Islam wins in Europe, a well-known social/genetic dynamic will kick in. All of the German girls and women (even the man-hating radical feminists and lesbians) will be raped, enslaved, or “married” by force, but one way or the other, there will be a rising generation of Muslims in Europe who are half-German.

People should understand a genetic process called “hybrid vigor.” There is a reason the Ottoman Turks collected European boys to be raised as Janissaries. The Arab desert Muslims have terrible DNA after 1,400 years of first-cousin inbreeding, but when they impregnate their German conquest victims they will create generations of 100% full Muslims who are half German. Of course, this will happen in every European country, not only Germany.

Americans should not be smug about the collapse and Muslim conquest of Europe. Half-German “Super Muslims” will be a tough adversary. Remember the Ottoman Janissaries from history. They were fearsome fanatics, but also big, strong and smart.

Another crop of “Super Muslims” were the Berbers of Morocco, who provided most of the brains and muscle used for the invasion of Spain in 711 AD. The “desert Arabs” were a scrawny and pitiful bunch. Man for man, they were weaklings compared to the hearty Berber mountain folk. But the Berbers were divided, tribe against tribe, from one Atlas Mountains valley to another. The invading Arab armies picked off one tribe at a time, and forced them all to convert. These newly united Berber Super Muslims were imbued with ”convert zeal,” and ready to invade new worlds to spread the banner of Islam.

United for the first time in history, the Muslim Berbers of Morocco (under mostly Arab leadership) turned their natural war-lust against the Christians of Spain. Like the pre-Muslim Berber tribes had been before them, each Spanish Christian principality was divided from the others across the mountains of Spain. The united and newly converted Muslim Berber armies swept over the separate Spanish fiefdoms one after the other.

The point is that Muslim invasions have often succeeded against divided foes who were, man for man, much stronger and even smarter. A generation later, this invigorated hybrid population can be very dangerous, because after the consolidation phase where the invaded region is brought under united Islamic control, they will be straining to burst their borders and conquer new worlds, like the Super Muslim Berbers did in Spain. Think also of Iran in this context. United Arab Muslim armies conquered Persia, creating another brand of hybridized “Super Muslims.”

I shudder to think of what German Super Muslims will be capable of in thirty years, if Islam is triumphant in Europe. They would make the Earth shake.

115 thoughts on “Matt Bracken: The Hybrid Vigor of the Coming European Islamic State”