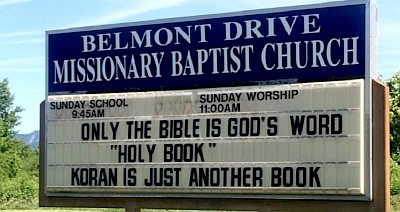 Hood River is a city in Oregon of some 7,000 people. It lies upstream from Portland on the Columbia River, where the latter is joined by the Hood River.

The pastor of a Baptist church in Hood River has gotten himself into big trouble by posting the above sign in front of his church. On the other side the sign says, “Allah is not our God, Muhammad not greater than Jesus”. Pastor Michael Harrington obviously didn’t get the memo — he doesn’t know that we are not allowed to say these things. They run contrary to the Interfaith Narrative, and specifically against the “Three Abrahamic Faiths” theme.

Needless to say, the full weight of politically correct opinion has come down hard on Rev. Harrington. So far he is standing firm — he says he won’t take the sign down until the beginning of June, when he would be changing it anyway. However, CAIR is reportedly planning a protest in front of the church this coming Sunday, according to the reader who sent us the tip:

My attention was drawn to this story.

I phoned the church to give my support, and the call was answered by the pastor. In the course of the conversation he told me that CAIR are trying to organize a protest demo at the church next Sunday.

So if you live not far from Hood River, you might want to show up next Sunday and show your solidarity with Pastor Harrington, and help keep him from being mau-maued into enforcing sharia laws against blasphemy.

Before anything else, the article’s author has to tell his readers that Pastor Harrington and his opinions are “bizarre”, to make sure they know they must never, ever hold those opinions themselves. A straight news report is not enough — the mission of the media requires that they ensure that all news complies with the Narrative. So Michael Harrington is “bizarre”.

The pastor of an Oregon Baptist church is under fire locally for putting what critics call a bigoted message on his church’s sign board, KATU reports.

“Critics” call the message “bigoted” — but the article fails to cite a single supporter of the message displayed on the sign. Presumably there is at least one other person in Hood River who agrees with the sign, but he or she is not quoted. Just the “critics”.

And Rev. Harrington believes in Jesus, so his opinion may obviously be totally discounted.

Pastor Michael Harrington placed the words on the reader board outside Belmont Drive Missionary Baptist Church. On one side it reads, “Wake up Christians, Allah is not our God, Muhammad not greater than Jesus.” On the other side, it says, “Only the Bible is God’s word, ‘holy book,’ Koran is just another book.”

Now come the critics, beginning with the mayor:

But locals, including the mayor, don’t want to see the signs.

“I was really annoyed and sad,” Hood River mayor, Paul Blackburn, told KATU. “I am annoyed that in this political season there’s a solid case of ugly going on. I think it norms up this kind of behavior like ‘oh it’s okay to be a bigot now.’

As a private citizen, Mayor Blackburn is free to hold an opinion about the sign that includes words such as “ugly” and “sad”. However, speaking from the office of the mayor — for which he took an oath to uphold the constitutions of Oregon and the United States — he should have said something like this:

“Regardless of the content of the sign, the words fall within the law and are protected by the First Amendment of the United States Constitution. My opinion about them is not relevant. I fully support the right of Belmont Drive Missionary Baptist Church to display that message on their sign.”

Notice the additional subtext to the mayor’s words: “in this political season”. This phrase can refer to only one thing, and that is the presidential candidacy of Donald Trump. The obvious but unstated message is: We must not allow any opinions that support Donald Trump, because he is an enemy of the Narrative.

Another resident, Eric Cohn, said he was very upset.

“I literally had to stop and back up and make sure I saw what I saw, and I was profoundly offended and upset by it,” Cohn told KATU.

We have free speech in the United States, BUT… not if someone is upset or offended. If Mr. Cohn is offended, just think how upset Muslims must be! They may even be offended enough to start rioting and burning cars and killing people! So the sign must come down.

Harrington told the station he has no plans to remove the sign until the beginning of June, when he was planning to put a new one up anyway.

Good for him. I hope he sticks to his guns.