It seems that the Islamic Council of Norway (IRN), like so many other Islamic organizations around the world, is running a halal-certification racket, and using Mafia-style methods to persuade businesses to participate. The IRN, in effect, makes them an offer they can’t refuse.

Our Norwegian correspondent The Observer has translated an article from Rights.no about the coercive tactics used by the IRN:

Does the Islamic Council of Norway operate like a Mafia organization?

Businesses and restaurants reveal that they feel pressured to buy a halal certificate from the Islamic Council of Norway (IRN) at an annual cost of NoK 6,700 [$816, €715, £566]. If a business fails to purchase such a certificate, IRN will send people over to the business to make a scene and create an uncomfortable atmosphere, they say. Not only that: If these businesses go along and purchase a certificate from the IRN they can only buy meat from five specific retailers. IRN will check to make sure that this mandate is being honoured, and if they find discrepancies, the business in question will have to forfeit 10% of its total earnings from the last six months. These are methods that one associates with the Mafia. 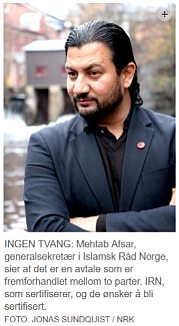 These are the methods used to pressure businesses to purchase IRN certificates, according to an NRK article.

Mohammed Namik runs the halal butcher shop Grønlandstorg Kjøtt in the Grønland neighborhood of Oslo. He sells only halal meat, but without an IRN certificate from the Islamic Council of Norway, also known as IRN.

Namik refused to pay the organization an annual fee of NoK 6,700, which would force him to buy meat from only IRN-approved suppliers.

“They (the Islamic Council of Norway) drove several of my customers away.”

When Namik rejected the deal, he found that several customers questioned whether he actually sold halal meat. According to Namik these customers were sent from IRN, and he perceived it as a deliberate pressure tactic to buy a halal certificate.

“We had customers who claimed that we did not sell halal meat because we lacked an IRN halal certificate. The fact that IRN hasn’t authorized us does not mean that we don’t sell halal certified products. We buy all our meat from Nortura, which is IRN-certified,” says Namik.

NRK contacted six businesses for comments, and of those four wanted to remain anonymous. The culture of fear prevails?

One of the businesses has received dozens of questions on Facebook about whether their meat in fact is halal.

Others have been beset by customers who claimed loudly that their products are not halal because they are not IRN-certified.

The restaurant Meze Grill at Grünerløkka in Oslo says that several customers reacted to the fact that the restaurant didn’t have an IRN certificate. When the owner decided to check what such a certificate entailed, it almost knocked him over.

The restaurant’s owner, Redouane Mrabet, finally felt obliged to purchase a certificate, but it turned out that the contract was a lot stricter than he had at first anticipated.

“You are obliged to purchase all your meat from five meat suppliers. What happens if you buy from another supplier?”

“IRN will take 10% of my overall revenues from the last six months.”

“What do you think about it?”

The Secretary General of IRN confirms that the latter is correct and that it is stipulated in the contract.

Note: The photo accompanying the article is of Mehtab Afsar, the general secretary of the Islamic Council of Norway (Islamsk Råd Norge, IRN)

13 thoughts on “Halal Racketeering in Norway”