A year ago today the Mohammed cartoon contest held by Robert Spencer and Pamela Geller in Garland, Texas was interrupted by gunfire when two mujahideen attempted to storm the venue. An alert and well-trained security force quickly resolved the emergency, and no one was harmed except the jihadis, both of whom were killed.

It seems like a long time ago, doesn’t it? There’s been a lot more jihad in the past year to occupy our attention: Paris, San Bernardino, Cologne, Brussels… And then there’s the European “refugee” crisis, which is a slow-motion form of jihad known as the hijra.

The pace of the Islamic push against the infidel West seems to be accelerating. What will the situation look like a year from now in Garland, or Berlin, or Stockholm, or Brussels?

To commemorate the first anniversary of the Garland jihad attack, Bosch Fawstin, the winner of last year’s Motoon contest, has drawn a new cartoon featuring Geert Wilders. The PVV sent out this notice along with the cartoon:

Today, exactly one year ago in Garland , Texas, an attack took place on the freedom of speech. Geert Wilders spoke at a meeting where Mohammed cartoons were shown. To commemorate this event the winner of the Garland cartoon contest Bosch Fawstin has created a new cartoon. 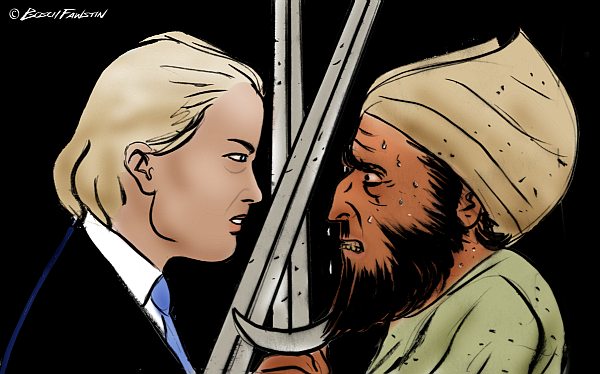 After last year’s events in Garland, a death fatwa against Bosch Fawstin was announced, and the cartoonist had to go into hiding. He’s been keeping a lower profile since then, but he hasn’t quit drawing his Counterjihad cartoons.

4 thoughts on “Geert Wilders: Still Eyeball-to-Eyeball With the Great Jihad”