Below are two articles from German media about the attempted cover-up of what happened on New Year’s Eve in Cologne. Not only did the authorities deny suppressing the use of the word “rape” in their discussion of what happened that night, but they are also attempting to crack down on whoever provided information to the press about the cover-up, with an eye towards prosecuting the whistleblowers when they are found.

Many thanks to Egri Nök for translating both articles. The first one is from Die Welt:

Who is it who does not want “rape” to emerge?

Two police officers report in parliament that they were told to cross out the word “rape” in a first account on the sexual excesses on New Year’s Eve in Cologne. But they stood their ground. 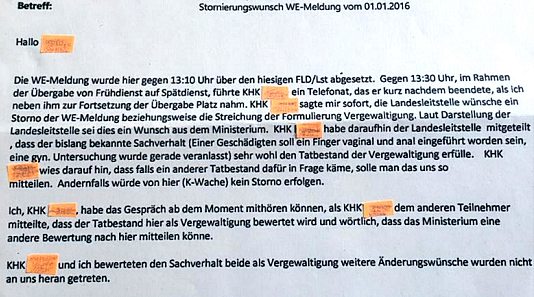 Explosive news around the New Year’s Eve night in Cologne. Die Welt has obtained an email from the Cologne police that describes how an account of sexual attacks was to be downplayed. Source: Die Welt.

Detective chief superintendent Jürgen H. of the Cologne police remembers very well how a phone caller from the superior authority complained about the “IE account” (important event report) on sexual attacks including rape. “Those are not rapes. Delete this word, and cancel the whole IE-report. Best, you write it over completely from the beginning,” is what the caller from the control center of the police of North Rhine-Westphalia allegedly said on January 1 2016.

His tone was “impolite” and “harsh”, and then came the explosive addendum: The deletion is a “request from the Ministry” — referring to the Interior Ministry. Superintendent H remembers that he refused to tolerate the disrespectful tone, and he pointed out to the caller that the case of the 19-year-old, who had fingers inserted into her bodily orifices, was without doubt a “rape”.

It is a key scene, about which the experienced Cologne police officer reports on Monday in front of representatives in parliament. The investigative committee on New Year’s Eve in Cologne tries to elucidate why sexual attacks on a huge scale could take place at the turn of the year 2015/2016 in front of the main train station of the Dome [Cathedral] city, and why the police did not intervene.

Apart from administrative failure, it is also about whether facts were trivialized, and errors downplayed, or even covered up, as the opposition in parliament, CDU and FDP, have come to suspect. The described “cancellation request” from the police control center, with reference to the Ministry, would therefore have to be viewed as a political interference. After all, the contested IE account was the account that first mentioned eleven sexual assaults, including one rape, and a North African group of offenders.

The NRW Interior Ministry has previously publicly denied that such a request for cancellation had occurred and stressed that the control center did not make a phone call to the Cologne police. The Ministry bases its denial on information from the national control center for police services (LZPD), and from the situation room of the State Office of Criminal Investigations (LKA).

But the inconsistency cannot be dispelled that easily, as, in addition to Jürgen H., another witness before the investigation committee reaffirms the attempted interference. Detective Chief Superintendent Joachim H. from the Cologne police reported that he partially overheard his colleague’s phone call on New Year’s morning during shift change, and he too was wondered why someone from the control center of the LZPD would call. This was “absolutely unusual”.

What annoyed him even more was the doubt that it was rape. After all, the victim had been surrounded by 40 to 50 men, and fingers were inserted into her bodily orifices. To fail to acknowledge that this is rape is “from a professional standpoint completely off,” said Joachim H.

He conceded, however, that the organized sexual excesses along with theft and robbery were a “new phenomenon”, a “first case”, unknown to the officers until then. The officer perceived the cancellation request as a “shady threat” from someone from a regional authority, who probably “inflated” himself. The two Cologne detective chief superintendents were not intimidated by the phone call that lasted for about one minute at about 1:30 PM on January 1st, and did not change the wording of the IE account.

But both superintendents don’t know who the caller from the control center LZPD was. The committee is expected to find out who was on duty at that time, and summon that person. The supervisor at that time was deputy CID Director Heidemarie W., and she learned of the explosive call on New Year’s Day. A few days later, she informed the department head for police affairs at the Interior Ministry of NRW, Wolfgang Düren, about the cancellation request, so that he was completely informed. Düren wanted to prepare for the special session in the Interior Committee of Parliament, in which he together with NRW Interior Minister Ralf Jäger (SPD) for the first time commented extensively on New Year’s Eve. But Düren did not mention the cancellation request to the committee then.

However, he said something that now brings additional complications upon himself. In January, Düren stressed that both days after New Year’s Day, January 2 and 3, there was intensive communication about New Year’s Eve, also with deputy CID Director Heidemarie W. of the Cologne police. But the officer now clarifies in front of the investigation committee: “I have to disagree with this.” It was January 4 when she, for the first time, talked to a member of the NRW Interior Ministry.

The second article from Express concerns the attempt by the Red-Green regional government to suppress the reports about their attempted suppression of the word “rape”:

(Photo caption: The committee of inquiry holds session in the room of the CDU. Here, the Cologne police officer Peter Römers is in the witness stand).

Düsseldorf — The revelations that are unfolding about Cologne on the night of New Year’s Eve provoke unusual measures. Now the red-green government majority in parliament wants to drill down on media reports by searching for “moles” in parliament.

SPD [Social Democrats] and the Greens think there was an unlawful disclosure of documents. According to EXPRESS information, on Wednesday, the government parties [Social Democrats and Greens] have submitted a request to the committee of inquiry for consignment of a letter to Parliament President Carina Gödecke (57, SPD).

They want her to give permission for prosecution by the judiciary. SPD chairman Hans-Willi Körfges (61) wants to discuss these issues “in the non-public part of the next meeting”:

“Whoever publishes confidential documents is violating laws, and endangers clearance efforts. There is a strong impression that there is unfair play for political calculations by undue deliberate indiscretions. VS documents (VS = classified information, note of editor) must remain strictly confidential”. According to Körfges, they “partially contain personal data of victims that should not be made public.”

However, Red-Green take as examples reports of “EXPRESS” and the “Kölner Stadt-Anzeiger” of 6 and 30 April, that were not at all about “personal data of victims”.

The EXPRESS had exclusively reported, among other things, that Cologne CID officials have noted in January that there had been an attempt by the National Police Agency on New Year’s day to delete the term “rape” from an internal police report to the interior ministry — according to them on “the Ministry’s request.”

But this Monday, the CID officials testifying as witnesses before the committee corroborated the facts and confirmed the revelations. For Jäger, himself scheduled as a witness next Monday, these are unpleasant descriptions. SPD and the Greens apparently assume that the press reports were based on “VS only for internal use” documents, which “only members of parliament and a limited staff can view”.

“According to preliminary legal assessment, both are in any case a violation of professional secrecy according to § 353b of the Criminal Code,”, the complaint says.

Matthi Bolte (30), the chairman of the Greens in the committee of inquiry in parliament, said to the EXPRESS: “Freedom of the press is a valuable commodity. If, however, through targeted indiscretions the ability of the committee of inquiry to work is at risk, this must be clearly identified.” For a violation of official secrets, if convicted, a prison sentence of up to five years or a fine is impending.

11 thoughts on “Cologne on New Years’ Eve: None Dare Call It “Rape””