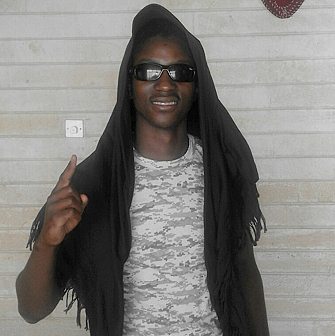 Tomorrow, at a church in Hamburg, a Protestant pastor and an imam will officiate at a service to commemorate a young man who joined the jihad and died in Syria last year.

Below is the story from Evangelische Zeitung (“Protestant Times”). Many thanks to Egri Nök for the translation:

Funeral for slain IS fighter in St. Pauli Church

He grew up in Hamburg and was radicalized. In 2015 he died in Syria. Now friends and family bid him farewell with a church service. His mother says: “I am still crying.” 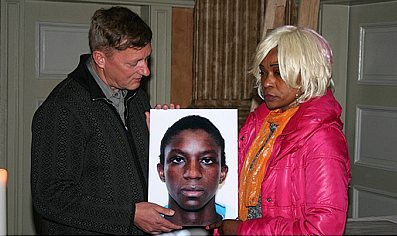 Hamburg. On Friday, May 27, a Christian-Muslim funeral will commemorate the young IS fighter “Bilal” who was killed last summer in Syria at the age of 17.

As a Christian, it is important for her to have a grave where she could lay down flowers, says the mother, Florence K. “I still cry.” The funeral service begins at 15 o’clock in the Protestant St. Pauli Church.

She is glad to have the opportunity for a funeral, says the mother. “A burden” fell from her heart. Such a farewell ceremony is important for his friends, too. The funeral service will be conducted by Pastor Sieghard Wilm and the Albanian Imam Abu Ahmed Jakobi. Florent Prince N., as his name was originally, was baptized as a Christian and converted to Islam later.

Florent was born in Cameroon, came to Germany as an infant, and grew up in St. Pauli [an inner-city district of Hamburg]. Probably when he was 14, he came into contact with the radical Salafist scene, and converted to Islam. In May last year, he travelled on a fake passport to Syria to fight for the Islamic State.

In Syria, it seems, he realised that the circumstances had little to do with what had been promised to him. He therefore recorded an audio message in Rakka in Southwestern Syria, in which he criticised the IS. Shortly thereafter, he was dead. In early March, the audio file was distributed. The Federal Office for the Protection of the Constitution thinks it is possible that he was punished for his message by the IS.

Pastor Wilm himself knew Florent from his work with youth. He [Florent] had been a friend of the pastor’s foster son for several years, and active in the community. There are photographs of him climbing up the facade of St. Pauli Church. It was important to him, so Wilm, that Christians and Muslims celebrate together, to make it clear that they pray to a “god of peace”.

She was also proud of her son, the mother said. He wanted to warn other young men with his message. He had been a “good boy with a big heart”. She talked to him on the phone shortly before his death in Syria. However, they did not talk about politics, but “as mother and son.”

[…] To summarise it, in a Christian Church, in the heart of a traditionally leftist part of town [St. Pauli], there will be a service for a deceased who joined an Islamic fundamentalist terror militia and who lost his life under unknown circumstances. A service at which an Islamic preacher will preach, whose ambition it apparently has been for his whole life, to strengthen fundamentalist Islam in Libya.

This is called an interfaith dialogue, and is intended that Christians and Muslims celebrate together, to show, quoting the Abendblatt [local newspaper in Hamburg] that they pray to a “God of Peace”.

One feels slight doubts rising, if the responsible people in the church community realise who it is they will let pray. To quote Jesus: “Father, forgive them, for they know not what they do.”

The translator adds these notes:

Initially, the audio message and the photographs were published by the Hamburg Federal Office for the Protection of the Constitution on March 22, 2016. 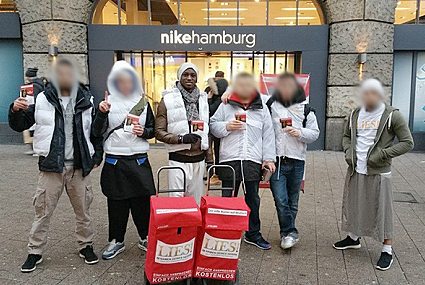 This group photo shows Bilal with the Salafist “Lies” (German imperative for “Read!”) organization, who give the Koran away to passers-by for free, something that has been plaguing German cities for years now.