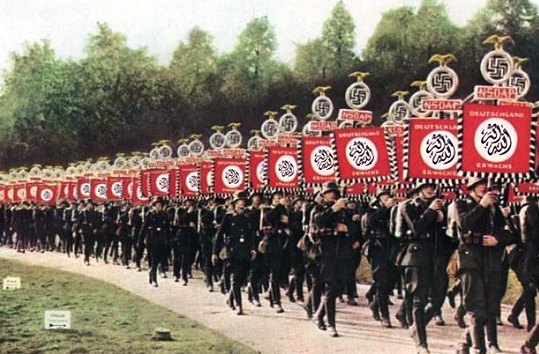 After their recent success in regional elections, the political party Alternative for Germany (Alternative für Deutschland, AfD) has adopted an anti-Islam plank in their party platform. Needless to say, the other parties, especially those on the Left, are outraged by such blasphemous talk. And a Muslim leader has compared the AfD with — surprise! — the Nazis.

Rembrandt Clancy has translated two articles about the AfD’s platform and the reactions to it. The first is from Die Zeit:

The AfD meet criticism with their Islam thesis. Aiman Mazyek accuses the party of threatening, for the first time since the National Socialist period, an entire religious community.

Aiman Mazyek, the Chairman of the Central Council of Muslims in Germany, compared the AfD, the right-wing, populist party, with the anti-Semitism of the National Socialists. For the first time since Hitler’s Germany, there is a party in Germany which once more discredits and existentially threatens an entire religious community, Mazyek told the NDR Info broadcaster [Norddeutscher Rundfunk Info is a radio programme]. In order to counteract this policy, he calls for more clarification regarding the goals of the AfD, whose aim is to create a republic without a liberal-democratic constitutional order. To that end, Islam is misused. Mazyek characterised the AfD as inconsistent with the Constitution.

Over the weekend, the leading AfD politicians characterised Islam as incompatible with a liberal constitutional order. The deputy party leaders Alexander Gauland and Beatrix von Storch announced in the Fankfurter Allgemeinen Sontagszeitung (FAS) their intention of giving a distinctly Islam-critical focus to their party platform. “Islam is inherently a political ideology, which is incompatible with the Constitution,” von Storch said. Gauland warned of an “Islamisation of Germany”. Many Muslims belong to Germany, “but Islam does not belong to Germany.”

The former AfD leader Bernd Lucke criticised the statements of the current party leadership: “By making populist demands such as the prohibition of minarets or that Islamic worship take place only in the German language, we only support the radicalisation of Muslims,” said Lucke, who is currently chairman of the conservative-liberal Alfa party [Allianz für Fortschritt und Aufbruch, Alliance for Progress and Renewal].

In the opinion of the SPD [Social Democratic Party of Germany] representative for religious denominations, Kerstin Griese, the AfD is fomenting “unfounded prejudices in a highly dangerous way”. It goes without saying that there is “an Islam which is in line with the Constitution” and this is practised by “far in excess of 90 percent of the Muslims who live here.” Griese considers the planned restrictions on the practice of religion to be unconstitutional, for “freedom of religion is integral to the Constitution.” Therefore, what they are now demanding, says Griese, is “not a discourse about Islam, but something unconstitutional”: it is not Islam which lacks conformity to the Constitution, but “the AfD, who are inconsistent with the Constitution.” The policy spokesman for religion of the Left party [die Linke], Christine Buchholz, accused the AfD of poisoning the social climate with Islam-hatred and of fomenting “racism against Muslims”. The President of the European Parliament, Martin Schulz, said that following the AfD’s initial crusade against the EU and then against refugees, they are now putting Islam in the crosshairs: “On that account they are no alternative, but a disgrace to Germany.”

The federal government is unwilling to have any debate about Islam imposed on them by the AfD. A government spokesman stated that the Federal Chancellor Angela Merkel (CDU) has said several times: “it is clear that Islam beyond question now belongs to Germany.” The Constitution guarantees freedom of religion and the unimpeded practice of religion. “That applies,” he added.

At their party convention, which is to take place in two weeks in Stuttgart, the AfD will decide their first party programme. The objective is to ban symbols of Islam from the public space. The draft programme of the party’s National Association, which has already been available for several weeks [German version only], contains the demand for a ban on minarets, muezzins and full-body coverings (p. 35). There is no intention to forbid the building and operation of mosques or to prohibit circumcisions, said von Storch.

The link to the Frankfurter Allgemeine leads to an article published yesterday:

Von Storch: “Islam is not Compatible with the Constitution”

In their first party programme, the AfD intends to lay down a clear anti-Islam policy. Koran schools and mosques are to be more strictly controlled. It is likewise desirable to forbid minarets entirely.

The Alternative für Deutschland (AfD) intends to place the anti-Islam policy at the centre of their objectives. What is more, Islam as religion is described as incompatible with the liberal Constitution. “Islam is inherently a political ideology, which is not compatible with the Constitution, the deputy party chairman and representative in the European Parliament, Beatrix Storch, told the F.A.S.

Alexander Gauland, party whip for the AfD in Brandenburg and as well deputy party leader, made similar comments: Islam is not a religion in the same way as Catholic or Protestant Christianity, but is intellectually always connected with the takeover of the state. For that reason the Islamisation of Germany is dangerous,” Gauland told the F.A.S.

“In Reality There is no Euro-Islam”

Gauland rejected the idea, that along side the fundamental orientation of Islam there is an enlightened Islam compatible with the liberal-democratic constitutional order. We are a Christian-laicist country; Islam is a foreign body. “In reality there is no Euro-Islam,” said the deputy AfD chairman. Von Storch also said that Islam will not be able to find any home in Germany. “Many Muslims belong to Germany, but Islam does not belong to Germany.”

The AfD is committed to monitor Koran schools and mosques more strictly; and if necessary they will be closed: “It is important to stop the proliferation of privately financed Islamic religious instructors and Koran schools. “There must be regulation of those who finance these places and teach in them,” said Gauland. According to him, that applies especially to mosques where Imams from Saudi Arabia preach and receive Saudi funding. “Only when these connections are disclosed, can the connections to the supporters of a strict religious practice in Saudi Arabia be cut, Gauland told the F.A.S.

29 thoughts on “Who Are The Real Nazis in 21st-Century Germany?”