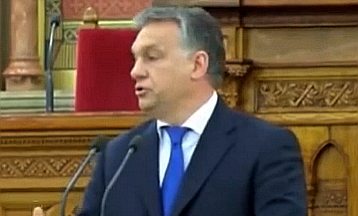 When Hungary implemented its new constitution five years ago, the European Union made its displeasure felt. It did not go so far as to impose sanctions against Hungary — as it did briefly in 2000 against Austria after Jörg Haider formed a coalition government — but it put pressure on the government of Prime Minister Viktor Orbán to walk it back, which Mr. Orbán and his party Fidesz successfully resisted.

There wasn’t really anything specifically wrong with the new constitution — it was just that it contained too much nationalism, too much Christianity, and above all, too much talk about sovereignty. The EU, as we all know, is not terribly fond of national sovereignty.

Last week Hungary held a ceremonial observance of the fifth anniversary of the promulgation of the Fundamental Law, i.e. the new constitution. The video below shows Prime Minister Orbán’s speech for the occasion before the Hungarian Parliament.

Many thanks to Dzsihádfigyelo for the translation and timing, and to Vlad Tepes for the subtitling:

11 thoughts on “Viktor Orbán: “Islamization is Banned by the Constitution in Hungary””