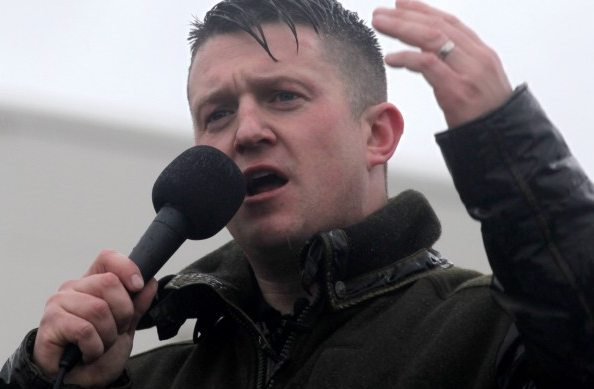 Tommy Robinson was physically attacked today by an angry Muslim in his hometown of Luton. Below are excerpts from the Breitbart report on the incident:

PEGIDA’s Tommy Robinson Attacked in Street by Muslim Man: ‘Are You Racist!?’

British PEGIDA leader Tommy Robinson has been attacked in the street by a Muslim man demanding to know if he is, “a racist”.

The video, which was caught live on Mr. Robinson’s Periscope page, shows him being approached in a car park by a man in full Muslim dress, demanding to know whether Mr. Robinson is “racist” or not.

Mr. Robinson explained the incident to Breitbart London, stating that he was going to a builder’s warehouse in Bury Park, Luton when he was “beeped at” by a man in a car and ushered over.

“That’s when I started recording [on Periscope],” Mr. Robinson explained, “Coz I knew what it was gonna be”.

The video shows a man getting out of a car, urging Mr. Robinson to “jump into my car”.

Mr. Robinson replied, “I don’t like Islam” — to which the man asks, “Why?” before slapping the phone out of Mr. Robinson’s hands and allegedly (off camera) proceeding to punch him repeatedly in the face.

The video adapted from Periscope may be troubling to some viewers, even though the violence occurs off-camera, so I’ve put the embed below the jump. Warning: you can also hear some salty language in it. It’s low-quality stuff, although Vlad Tepes has enhanced the sound so that you can hear more of what is being said in the background:

Today’s incident has restarted the discussion about a more or less permanent fundraising effort to maintain a “legal and security fund” that can be drawn on not only for Tommy’s legal defense when the state comes after him again, but also for specific security needs when they arise. For example, he might require bodyguards for himself and his family when he takes his kids on outings.

I’ll keep you informed if anything specific is organized.

41 thoughts on “Tommy Robinson Attacked by Muslim in Luton”