As President Barack Hussein Obama departs Britain for Germany, he leaves in his wake a large number of angry Britons — most prominently London Mayor Boris Johnson — who publicly express their resentment at Mr. Obama’s interference in Britain’s internal affairs in his lobbying against a “Brexit”.

The following guest-essay by Nick McAvelly compares the current situation with a meeting in August 1941 between Sir Winston Churchill and Franklin Delano Roosevelt that resulted in the Atlantic Charter. 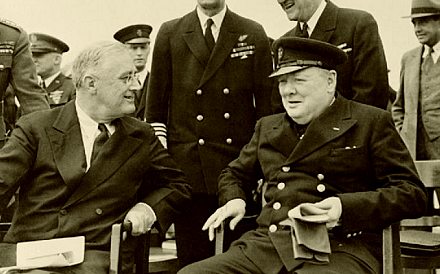 The Atlantic Charter: Its Relevance Today

In August 1941, Winston Churchill, the wartime Prime Minister of Great Britain, sailed across the Atlantic in HMS Prince of Wales to meet Franklin Roosevelt,[1] who was at that time President of what Churchill called ‘the most powerful state and community in the world’,[2] the United States of America.

The President’s ‘special advisor’ Harry Hopkins[3] was aboard HMS Prince of Wales during the voyage. Hopkins had been visiting the United Kingdom in July 1941. According to the Soviet Ambassador Ivan Maisky, Hopkins had ‘entered the room’[4] while Churchill was reading a ‘personal message’[5] from Josef Stalin, in which the Soviet leader asked for military assistance. Subsequently, Hopkins met with Maisky at the American embassy and persuaded him that he, Hopkins, ought to visit the Soviet Union. Hopkins’ goal, according to Maisky, was to do whatever he could to ‘bring Roosevelt and Stalin closer’.[6]

Maisky facilitated the trip by writing a personal instruction inside Hopkins’ passport which said that he should be allowed into the Soviet Union. Hopkins duly arrived in Moscow before the end of the month.[7] So it was that when Winston Churchill arrived at Scapa Flow to board Prince of Wales, he found Hopkins waiting for him, having returned to Britain exhausted following his marathon journey.[8] It is an interesting historical fact that the unelected Harry Hopkins met Josef Stalin in Moscow before Roosevelt and Churchill met as leaders of their two nations during World War II.

In Newfoundland, at this first wartime summit between America and Great Britain, the President suggested that a document be drawn up which would establish ‘certain broad principles which should guide our policies along the same road’.[9] An initial draft was drawn up by Alexander Cadogan of the Foreign Office,[10] and after some discussion and relatively minor alterations, the declaration was deemed acceptable by both Americans and Britons.[11] This document came to be known as the Atlantic Charter.[12]

Churchill made the most of this meeting with Roosevelt, speaking in a radio broadcast on 24th August 1941 of ‘the deep underlying unities’ shared by their two countries, and claiming that their meeting symbolised the coming together of ‘the good forces of the world against the evil forces which are now so formidable and triumphant and which have cast their cruel spell over the whole of Europe and a large part of Asia.’[13] On the Sunday morning of 10th August 1941, when President Roosevelt came aboard HMS Prince of Wales together with hundreds of US Navy personnel to attend Divine Service, who would have disagreed with him? Here are Churchill’s words:

‘This service was felt by us all to be a deeply moving expression of the unity of faith of our two peoples, and none who took part in it will forget the spectacle presented that sunlit morning on the crowded quarterdeck – the symbolism of the Union Jack and Stars and Stripes draped side by side on the pulpit; the American and British chaplains sharing in the reading of the prayers; the highest naval, military, and air officers of Britain and the United States grouped in one body behind the President and me; the close-packed ranks of British and American sailors, completely inter-mingled, sharing the same books and joining fervently together in the prayers and hymns familiar to both.’[14]

It is not difficult for a Briton living in the 21st century to see the United States of America as our natural allies in any military conflict. Unlike the alliance with the Soviet Union during the war, which was born of necessity and was forever tainted by the duplicity and barbarism of the Soviets,[15] the Americans have shown many times that they are our true brothers in arms, and that they are willing to fight with us to preserve our way of life.

What are those ‘common principles’, those ‘deep underlying unities’ which both countries share, and for which so many good men and women gave their lives during the war? Let us look at point three of the Atlantic Charter, that joint declaration made by the leaders of our two countries in 1941:

‘Third, they [the United States of America and the United Kingdom] respect the right of all peoples to choose the form of government under which they will live; and they wish to see sovereign rights and self-government restored to those who have been forcibly deprived of them.’[16]

How disappointing it is to see an American President visit the United Kingdom in order to threaten British citizens because they might peacefully choose a form of government which that ‘lame duck’ President disapproves of for his own ideological reasons. How disgraceful it is to see an American President stand on British soil and say that if British citizens choose to have their sovereign rights and self-government restored to them, then he will make them suffer through prejudicial trade arrangements that will favour other areas of the world, where the indigenous peoples are already under the iron heel of European super-governance.[17]

The number of fatalities during World War 2 is almost incomprehensible. In his authoritative history of the Second World War, Sir Martin Gilbert estimated that approximately 46 million (4.6 x 107) human beings died between the German attack on Poland in September 1939 and the Japanese capitulation in August 1945.[18] More recent research has estimated that the total number of fatalities could be significantly higher than that. One thing is beyond dispute, however. Every Briton knows that many Americans died while sailing merchant ships across the Atlantic to Britain in the Battle of the Atlantic (especially during Operation Drumbeat in early 1942),[19] and many more died alongside British and Canadian troops during the execution of one of the largest and most daring military operations in history, Operation Overlord, in 1944. These military endeavours are embedded within the consciousness of every Briton of my generation, and we are all aware that America paid a steep price to make certain that those operations were ultimately successful.

Apparently, none of this matters to America’s ‘lame duck’ President. Barack Hussein Obama has deliberately ignored the ‘common principles’ and ‘deep underlying unities’ shared by our two nations and has spoken out publicly against the explicitly stated ideals in the Atlantic Charter. By so doing, Obama has betrayed the memory of the Americans who gave their lives during World War II so that future generations of people living in Britain, just like everyone else in the world, would have the right to be able to ‘choose the form of government under which they will live’.

The war may have been over for 70 years, but the principles of the Atlantic Charter are still relevant, because they provide us with a yardstick with which to measure the intellectual and moral integrity of the politicians in office today. By properly understanding our own history, we can see that Barack Hussein Obama does not, as it said in the Atlantic Charter, respect the right of the British people to choose the form of government under which they will live. If the British people choose to leave Europe, then that is the right decision, by definition. Instead of accepting that, Obama has threatened British citizens because he would prefer that they gave away their sovereign rights to freedom of speech and freedom of religion, and renounced their hard-won claim to self-government. The possibility which Obama prefers is for the Britons of today, and their children, and their grandchildren, to be ruled by a European superstate headed by an all-powerful Germany. Is there anything wrong with this picture? Of course Barack Hussein Obama is not British, and he does not share our history, or our understanding of the war, any more than he shares anything else with us. The only principles that Barack Hussein Obama has consistently sought to advance, and has acted in accordance with since the day he came to power, are those of the false religion of Islam. And if we really know our history, then we will know what Sir Winston Spencer Churchill had to say about that.

33 thoughts on “The Atlantic Charter: Its Relevance Today”