Our longtime reader and commenter Yokel sends this note about his experience in a culturally enriched London bookshop:

I was in London yesterday and passed an Islamic bookshop on my way. Not being in a rush, I sauntered in while carrying the ham sandwich I had just bought in a shop nearby. I was greeted by a native English-speaker (from her lack of Urdu intonation), hijabbed, but not niqabbed. She appeared to be alone in the shop, though her man was probably in the back room. 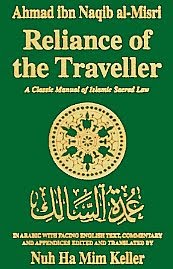 I asked for a copy of Reliance of the Traveller*, in the translation approved by Al-Azhar. “Oh, we haven’t had that in for a very long time. I think it is out of print,” she said.

“You might just be lucky and find a secondhand copy,” came her reply.

And so I left to open and eat my ham sandwich.

Of course, searching on Amazon UK for Reliance of the Traveller gives me a page with nine entries for Reliance and seven other books, mostly by Counterjihad authors such as (in order of appearance): Stephen Coughlin, Mark Durie, Bat Ye’or, Nonie Darwish, Paul Revere.

So she turned down a cash sale in an attempt to keep a kafir ignorant! Words fail me. OK, they don’t; but they are not printable in polite company.

Obviously, the best way to be certain you can find a copy of Reliance in an Islamic bookstore is to put on a fake beard (no moustache), wear a nightgown, and paint a zebiba on your forehead using eye shadow. Kuffar who are skilled at mimicry could also adopt a “Bangla” accent to help clinch the deal.

25 thoughts on “Reliance of the Traveller: Don’t Leave Home Without It!”