The third annual March for Persecuted Christians and Jews has just concluded in Orlando, Florida. Below is a report on the event sent by Elaine, one of the participants in the March and associated events. 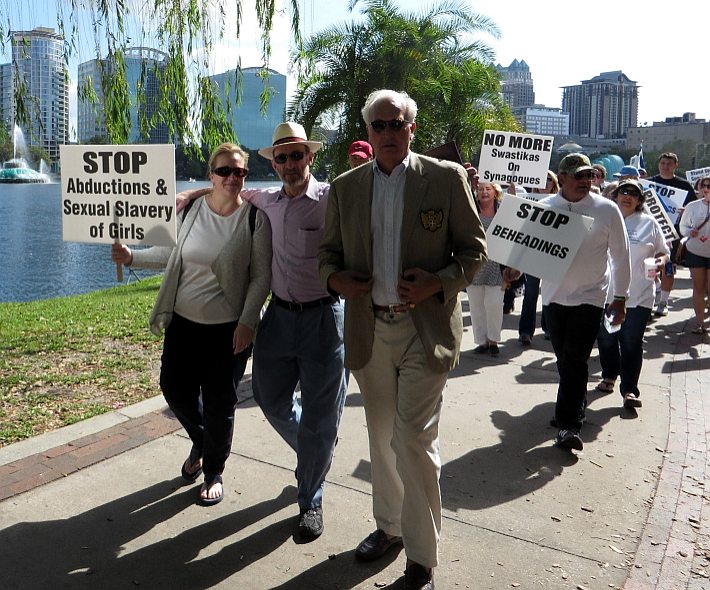 Report on March for Persecuted Christians and Jews

For the third year in a row, concerned Christians and Jews gathered in Orlando to march in support of the millions of persecuted Christians worldwide. This year, the march included a representative of the Jewish faith.

Christians around the world, especially in the Middle East and North Korea, are currently mercilessly persecuted and killed. By and large, the world, and in particular the mainstream Christian churches, have been watching silently. What began in Vienna, Austria, eight years ago in December with an annual torchlight march now also takes a place in Orlando, Florida, thanks to the tireless efforts of Pastor Bruce Lieske, Alan Kornman and the Burning Bush Ministries. A silent march of concerned citizens and international guest speakers processed around Lake Eola in downtown Orlando. 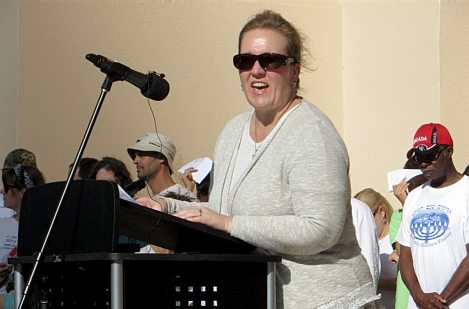 This year the speakers included Elisabeth Sabaditsch-Wolff*, a board member of Pax Europa and the Wiener Akademikerbund, who spoke about the origins of the March in Vienna, and the ongoing struggle against religious persecution on both sides of the Atlantic.

Also present was Rabbi Jonathan Hausman of Ahavath Torah congregation in Stoughton, MA. His attendance was particularly welcomed as Jews are especially vulnerable once again as the Islamization of both Europe and the United States increases. As Elisabeth noted in her speech, “Christians and Jews must march side by side against the persecution and abuse. We must not allow the persecution of people and their religious beliefs in the guise of misconceived tolerance and suppression of freedom of speech.”

The event ended with a mock ISIS-style execution and the recitation of a poem written for this purpose describing the horror of the Koran-sanctioned beheading of 21 Christians on the shores of Benghazi, Libya. The audience was left stunned. 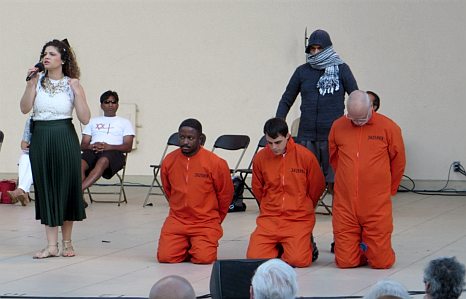 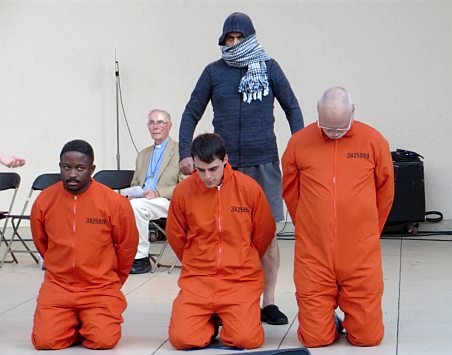 It was painful to note the growing lack of interest and attendance at this March. Despite a year-long effort by the organizers, none of the numerous churches in the Orlando area, save one fellowship church, supported their brothers and sisters. As far as could be ascertained, no Jews made their way to Lake Eola. Have we been dhimmified into silence already? 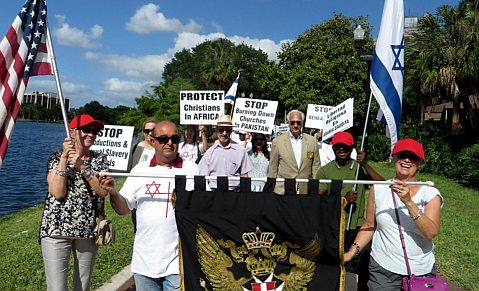 It is to be hoped that the organizers will not be intimidated into submission and continue their quest to raise awareness of the greatest persecution of Christians in recent memory. 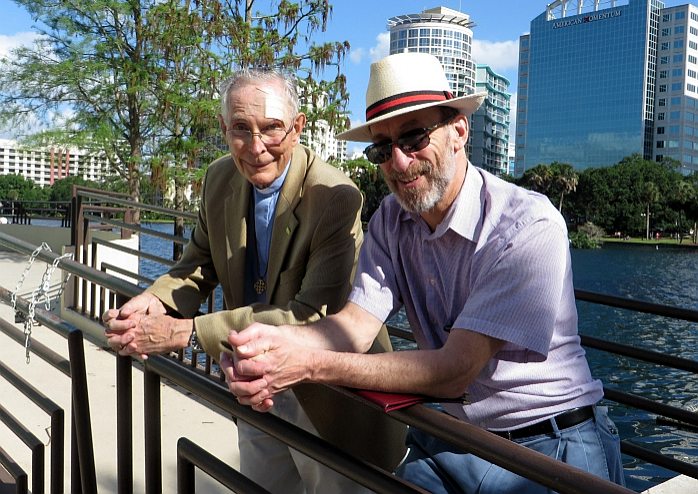 * Below is the prepared text of the speech by Elisabeth Sabaditsch-Wolff in Orlando:

I bring you heartfelt greetings from my country, Austria, and from my city, Vienna. Your country and mine are bound together by their high regard for freedom. In 1789, the United State ratified the Bill of Rights, and the First Amendment guarantees not only freedom of speech, but also freedom of religion. In Austria, almost at the same time, Emperor Josef II, issued an edict called the Patent of Tolerance, which liberated the Jews and other religious minorities from many restrictions and allowed them to settle in Vienna. Both of these declaration are nowadays considered part of the worldwide foundation for constitutional safeguards on freedom of religion and the peaceful co-existence of religions within a common cultural area.

More recently, Austria and the United States have also been bound together by the idea of freedom and tolerance. For this reason, many “freedom thinkers”, that is, pioneers of a theoretical foundation of freedom, were able to develop their ideas effectively. Thus it is with great pleasure that I note the remarkable convergences between American and Austrian endeavors with respect to freedom, as exemplified in very personal relationships. One notable example can be found in Friedrich August Hayek, an Austrian economist and philosopher on matters of freedom, a Nobel Prize recipient, who spent an important part of life and career in Chicago, which for many decades has been home to a teaching and research facility.

This tradition of fundamental rights and freedoms as realized in such an exemplary manner by the United States and Austria reached its pinnacle in the 20th century. Thus, in Vienna, on the 60th anniversary of the signing of the “United Nations Charter of Human Rights,” an important idea took shape: Why not use the date of the signing — the 10th of December — to advocate for persecuted Christians around the world, to call attention to their plight, and to push for action to be taken against oppression, torture and discrimination? In this manned the Prayer March for Persecuted Christians was born. It has become an annual event since then.

After the end of Soviet communism in Eastern Europe, there was some hope of irreversible progress in human rights. Unfortunately, we were very wrong! The spread of ever more radical forms of Islam, especially in countries in the Middle East and Africa, have led to a dramatic deterioration of human rights. The prophet Mohammed is cited in hadiths as follows: “Whoever changed his religion, kill him!” Hence it does not come as a surprise that a very radical form of Islam does not recognize freedom of religion.

Although some fundamental human rights — including freedom of religion, freedom of expression and freedom of assembly — are still enjoyed by many Christians in the world, other rights are restricted or non-existent. In some places Christians cannot own property, and Christian householders have no rights. Every year 200,000 of them are killed because of their religious beliefs. The persecution of Christians in the Middle East has increased dramatically since the emergence of the Islamic State in Syria and Iraq. Rape, murder, enslavement, torture, and mutilation have become daily occurrences for those Christians unfortunate enough to live in ISIS-controlled territory.

I don’t have to tell you that Islamic rule is the all but invariable prerequisite for the persecution of Christians. According to the index of global persecution published by the respected organization Open Doors, of the ten countries in which Christians are intimidated and persecuted most aggressively, nine are Islamic by government or culture. Violent suppression of Christianity is encouraged — and even mandated — by Islamic law, or sharia, which is based upon Islamic scriptures.

Due to its centuries of experience in the Middle East, especially since the turn of the century, Austria has concerned itself with the phenomenon of Christian persecution. As a result, the Platform for the Solidarity of Persecuted Christians” was formed. The human rights activists who marched in Vienna aimed to push the persecution of Christians into public consciousness. We wanted to give the victims a face, because the violence and barbarity directed at them is so often ignored by the media and public officials throughout the Western world. We strive to provide a voice for the voiceless.

The march in Vienna was a torchlight walk from the Opera to Saint Stephen’s, the most beautiful and important cathedral in the land. At the end an ecumenical divine service was celebrated with the participation of various Christian denominations, including those from regions which suffer the greatest persecution.

This year we celebrated the 8th anniversary of this march, with 23 organizations supporting our endeavors. Once again, the march was a great success. Countless men and women stopped their busy Christmas shopping in order to line the street leading to St. Stephen’s cathedral, many with tears in their eyes.

Still, despite our success, the persecution of Christians has not ended or even abated. On the contrary, with the establishment of ISIS and the new caliphate the number of radical-Islamic cruelty, persecution of Christians, Kurds, Yazidis, and Alawites, has reached new heights. Even those Muslims considered apostates because they do not follow Koranic teachings to the letter are in grave danger of being beheaded, shot, or at least jailed.

Persecution of Christians is, without doubt, planned very effectively and with special consideration of Islamic belief. Special acts of symbolism are used: Christian girls are raped and enslaved. Christian homeowners are ousted from their houses and banished proving that all of this is “Allah’s booty”. Finally, Christians are tortured and crucified.

Two years ago, the idea of a march in solidarity with persecuted Christians taken up by my friend Rev. Bruce Lieske, and so it happens that we are here in the beautiful city of Orlando for the third time in a row. I am honored and grateful to have amongst us a great friend of mine. He is a man I admire for his courage to speak the truth in times of great lies, a philanthropist and strongly committed man who loves Jews and Christians: Rabbi Jonathan Hausman. This is a very encouraging sign, for the responsibility of solidarity with Christians also implies a solidarity with of Jews. Antisemitism is an ugly phenomenon, which has spread not only in Europe, but also in America, due to the breeding ground of Islamic communities, which provide the ideological basis.

It is for this reason and in order rouse the American public that Christians and Jews must march side by side against the persecution and abuse. We must not allow the persecution of people and their religious beliefs in the guise of misconceived tolerance and suppression of freedom of speech. America, you must remain free! Do not allow yourselves to be forced into sharia through the creation of parallel societies. And take this occasion — the march in solidarity for persecuted Christians and Jews — to focus on your Judeo-Christian foundation of culture.

God bless you all.

10 thoughts on “Orlando: March for Persecuted Christians and Jews”