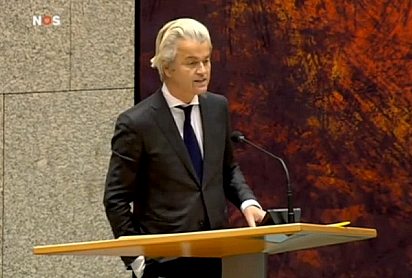 On March 29, one week after the jihad massacres in Brussels, Geert Wilders, the leader of the Party for Freedom (Partij voor de Vrijheid, PVV) spoke in the Dutch Parliament about what had happened, and the danger that Islam poses to the Netherlands. He was immediately set upon by the usual ankle-biters of the Left (and the “Center Right”, i.e. the VVD) who denounced him for “dividing” the country.

In the video below, pay close attention to the back-and-forth between Mr. Wilders and his detractors — you’ll notice a subtle shift in the center of gravity of the debate. Some of his opponents now grudgingly concede his point that there is a problem with Islam in the Netherlands, and just savage him for his proposed solutions, or for being an “extremist” about it, etc. In other words, the argument is shifting from whether there is a danger posed by Islam to the best way to deal with that danger.

Many thanks to H. Numan and Kericjang for time-stamping the translation, and to Vlad Tepes for the subtitling:

43 thoughts on “Geert Wilders: “It is Time to Liberate the Netherlands””