Our Indian correspondent The Kafir takes a close look at zakah, the universal Islamic tax disguised as a charity operation. 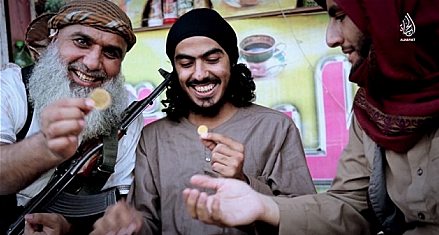 Not the Poor-Dues, Not the Charity Money, Not the Alms,
But the Permanent Taxation System of Islam

“Zakah expenditures are only for the poor and for the needy and for those employed to collect [zakah] and for bringing hearts together [for Islam] and for freeing captives [or slaves] and for those in debt and for the cause of Allah and for the [stranded] traveler — an obligation [imposed] by Allah . And Allah is All Knowing and Wise.”

This is the Quran verse detailing the uses of Zakah. Let us go over its uses mentioned in the verse, one by one.

Zakah is used for:

1. The poor and the needy. This is the only use that is advertised to kafirs, the only function that is ever talked about in public. In fact, Zakah is always translated as poor-dues or alms or purifying alms; whereas, in reality, it is a tax, as will be shown below. Sayyid Abul A’la Mawdudi, Founder of Jamaat-e-Islami, in his book Let Us Be Muslims[1] writes:

“Only Muslims are entitled to receive Zakah. The definition of Zakah, as given in hadith is: ‘It will be taken from the wealthy among you and distributed to the poor among you (Bukhari, Muslim).’”

3. Winning hearts for Islam. This is notable. So kafir leaders can be bribed using Zakah money to make them support, or at least not oppose Islam, or to defect to the camp of Islam. We should not be surprised if in the near future Angela Merkel and other Western and kafir leaders come into a lot of money. Under this heading, the love-jihadists can also be financed. and any convert can also be given money.

Sayyid Abul A’la Mawdudi, Founder of Jamaat-e-Islami, in his book Let Us Be Muslims writes on this use of Zakah:

“These are the people who need to be given money to seek their support for Islam, or to prevent them from opposition. Muslim converts are also included in this category. Those of them who may lose their jobs or homes upon becoming Muslims deserve every help, but even wealthy converts may be given Zakah to reconcile them by showing at first hand the caring nature of Islam. After the battle of Hunayn, the Prophet, blessings and peace be on him, gave so much of the booty to Muslim converts that some Ansars complained about it. He replied: ‘These people have just entered Islam after giving up Kufr, and I want to please their hearts.’ On this basis, Zuhri has defined mu’allafatu ‘l-qulub thus: ‘Any Christian or Jew or non-Muslim who has entered Islam, though he may be a wealthy man.’” (page 235)

4. Muslims who have been taken prisoners in a war by kafirs. Their ransom can be paid out of Zakah money. We may discover in future that a lot of money from Saudi Zakah was spent on freeing prisoners from the Guantanamo Bay detention camp.

5. Helping Muslims who get buried in the mounds of debt.

6. The cause of Allah, that is, jihad. So Zakah can be used to finance jihadists, and jihad operations; and the families of killed jihadists can be supported.

7. Stranded wayfarer. Of course, in those days feeding travellers was a cultural norm.

Remember: the uses listed above are detailed as such in Quran verse 9:60, and thus, being the command of Allah, are beyond disagreement or dispute. This makes it clear that Zakah is anything but charity money. Its uses make it clear that it is a fund at the disposal of Muslim leadership, to be used to further the cause of Islam, to make Islam victorious. It is more in the nature of a tax, much like the revenue collected by a regular government of a country.

That Zakah is a tax, and not a donation towards charity, becomes more clear and conclusive in the following quotations from the book Let Us Be Muslims by Sayyid Abul A’la Mawdudi, Founder of Jamaat-e-Islami:

After the death of the Prophet, blessings and peace be upon him, some tribes refused to give Zakah. Abu Bakr declared war on them, as if they had disowned Islam and turned kafirs, even though they performed prayers and professed faith in Allah and His Messenger. For they were like a rotten limb. Islam is an integral whole of which Almsgiving (Zakah) is an essential part; without Almsgiving, even salah (namaz), Sawm (fasting), and Iman (declaration of faith) lose their credibility. (page 198)

What immense blessings does Zakah have? That, brothers, I shall explain later, but let me emphasis how the very fact of our being Muslims depends on paying Zakah…

[…] Abu Bakr, the first Caliph, as I have stated above, had no hesitation in taking up arms against Muslims who believed in God and the Messenger and performed Salah (prayers), but refused to pay Zakah. Some of the Prophet’s Companions, initially, had some confusion whether war could be waged against them, but not Abu Bakr, who categorically stated:

‘By God! If these people withhold the Alms they used to give during the time of the Prophet, Allah’s blessings and peace be upon him, even if it be a piece of rope by which a camel is tied, I shall raise my sword against them ‘(Hadith Abu Da’ud)

His argument convinced all the Companions and they unitedly accepted that jihad must be waged against those who refuse to give the Alms. In the Quran, too, it is stated that refusal to give the Alms is the mark of idolators who deny the Hereafter:

[…]…….This, brothers, is the real meaning and import of Zakah which sustains the edifice of Islam. Do not consider it a tax like the tax levied by the governments. It is the basis and essence of Islam, its very life blood. (page 214-215)

An obligation that is not voluntary, and which has uses listed above, is a tax, not charity. The translation of Zakah as charity-money or poor-dues or alms or purifying alms is the biggest taqiyya, the flagrant lie told to kafirs by each and every Muslim.

Zakah is the permanent tax system of Islam, because of which the Muslim leadership never runs out of money. The Muslim leadership never has to contest an election nor run a campaign to win and be in government to gain access to tax revenue. Its tax revenue is guaranteed by Quran. And because they legitimately spend out of Zakah on themselves, they have all the incentive in the world to keep Islam alive. Islam is the source of their livelihood, their riches. And any movement that benefits its leadership personally never dies. It is part of human nature that a man guards with his life what feeds him.

By a quirk of fate, Mohammed got everything right for Islam to continue so long. He knew human nature so well. In my opinion, verse 9:60 of Quran is the most important verse as far as the survival of Islam is concerned. To quote Mawdudi again, repeating from above, ‘This, brothers, is the real meaning and import of Zakah which sustains the edifice of Islam. Do not consider it a tax like the tax levied by the governments. It is the basis and essence of Islam, its very life blood.’(page 215)

If you google “Ridda wars”, you would find that it is translated as “apostasy wars” and describes the wars Abu Bakr fought against those who had allegedly left Islam after the death of Mohammed.

Zakah can not be refused to be paid. If a Muslim refuses to pay Zakah (also written as Zakat), he is no longer a Muslim, but a kafir, and against him jihad is to be waged.

So, the next time you hear that some Muslim organisation in the US is collecting charity money, know that it is actually collecting tax for the parallel Muslim government in the US. Yes, even in a kafir country the Muslim leadership is actually a parallel government, because of Zakah. A defining characteristic of a government is its power to levy tax, and the Muslim leadership has this power, everywhere, over all Muslims. And it is empowered to use this tax money on itself, on the diplomacy towards kafirs, and on the “soldiers” fighting to defend it. All these are characteristics of a government of a country.

And it is evidence of the power of taqiyya that the kafirs themselves call Zakah charity money, and treat and think of it as such.

If kafir governments hope to survive, if they want to keep their countries safe for the kafirs, they must ban Zakah collections from the Muslims residing in their own countries. Tax collection must be the right only of the legitimate government of a country, not of the leadership of a religious group in it. If this aorta of Islam is cut, Islam will die, and humanity will be free from this curse masquerading as a religion.

7 thoughts on “Zakah: The Permanent Tax System of Islam”