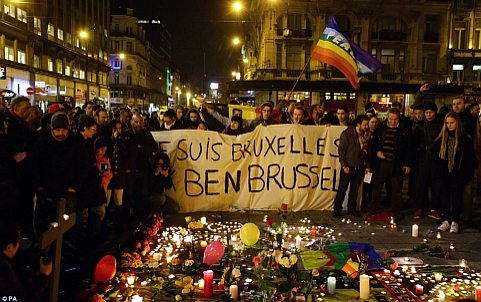 Nicolaus Fest is a German lawyer and freelance journalist. The following op-ed was published on his website. JLH, who translated the piece for Gates of Vienna, includes this note:

On his webpage, the author makes a short note of something he found on the internet: “Of all the varieties of Islam, the most common one seems to be the one that has nothing to do with Islam.”

Brussels — What to Do?

Let us begin with a bit of irreverence: Brussels is boring — at least its reactions. They have the effect of Groundhog Day — an infinite loop of sameness. Facebookers background their profile photos with the flag of the stricken land. The “je suis” proclamation is made. The Brandenburg Gate, the Empire State Building and the Eiffel Tower light up in the appropriate national colors, and some cartoon character somewhere is weeping about the assaulted city — this time it’s Tintin. Editorials and statements are just as predictable: Absolute security is impossible; This was an attack on the open society; Fanatics do not speak for Islam; In a globalized world we must become accustomed to global terrorism. And naturally there is no dearth of warnings that we must not “politically misuse” the attacks — must stay calm. As if dozens of dead were no reason to get excited. In contrast to the superficial speeches about solidarity, in fact, such advice reveals more than anything else a lack of solidarity and empathy. What some may call a “cool head” is actually the “cold heart” of a land that has thus far been spared these attacks.

Yet this “cool” which masquerades as civilization, just like the ritualization of acquiescence, is nothing but a sign of weakness. All the formulas of conciliation are in essence variations on self-abnegation. Do not act. Despite repeated new attacks, do not mention the enemy by name. No, instead, entrench yourself behind the “now more than ever” avowals to “keep on keeping on”, which will usually last until the cancellation of the next international soccer match. It’s how to gloss over political inactivity. “Keeping on” is not an option.

The attacks will not stop, and they will reach Germany. They will become more ferocious. So the question arises: How long does the West intend to do nothing about those who are attacking it over and over again? Is Germany expected to accept 500 dead per year as the price of tolerance and the welcoming culture? Or 5,000, or ten times that many victims?

And thus the commentaries reveal a strange contradiction. All the leaders and commentators in the Western world are unanimous: The attacks in Brussels, like those in New York, London, Madrid, Paris, Copenhagen, etc., are “declarations of war against the West”. And yet the dominant advice is still to stay calm? This situation is not devoid of humor. Until recently, at least, declarations of war marked an end of equanimity. Even the stoic English did not go to their five o’clock tea, when Hitler forced them into war. Whoever says “declaration of war” also says: From this moment on, life will be different; from this moment on, this is a different country!

What else, besides a “declaration of war”, besides the use of military materiel against civilians, must happen, before the political system protects us? Do we really need an attack with nuclear or chemical materials to recognize the threat? Must the Petersdom (cathedral) be lying in ash and rubble, must the works of Dürer, van Gogh or Michelangelo be destroyed for the West to wake up? Anyone who just points at the rule of law is not prepared to learn anything from the attacks. Certainly the constitutional state is a fundamental of the West — but this is about the constitutional state at war. That makes a difference.

Anyone who understands the attacks as a declaration of war should address three things. First, the restriction of constitutional guarantees. Constitutionality is always procedural security, that is, justice as such is not guaranteed, but the probability that, in the progress through possibly several instances, justice will be served in the end. Constitutionally, in a “state of defense”, there can be such restrictions of guaranteed rights. In a state of war, this possibility must definitely be taken into consideration. Specifically that means radical restriction of the ability to ward off deportation, a suspension of the right to asylum, surveillance made easier, tough residence requirements, curfews for potentially dangerous persons.

Second, pressure on the milieu of sympathizers by hard measures against those connected closely or distantly. For instance, the Israelis regularly demolish the houses of the families of assassins. It would be conceivable here, in the case of attacks, to close mosques and organizations and levy heavy financial damages on the Muslim community. Splintering of clan groupings and radical groups by assignment to widely scattered residential locations. There could be discussion of whether children of terrorists and hate preachers should be left in their care. What should become clear is that every attack will have extremely negative results for the entire Muslim community. This would at last initiate the long overdue intra-Muslim discussion and put pressure on the hitherto inactive Muslim organizations.

Third, extinguishing terrorist cells through use of special forces or the military. Germans, too, will have to learn asymmetric warfare and commit themselves to the guerrilla operations already long in use by the Americans, the British or the Israelis. This includes the extra-legal killing of actual or potential terrorists and, possibly — as is sometimes the case in execution by drone — of innocent passersby. These killings are the price of survival. That is, there is no way to avoid the suspension of the constitutional state, and with that comes a paradox. To defend the constitutional state, it must be partly given up. That is what actually stands behind the unwieldy wording “in case of defense”.

35 thoughts on “What Happens After We Finally Call it a War?”