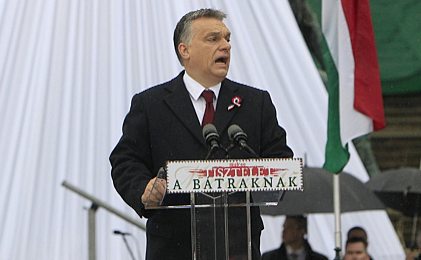 Last Tuesday (March 15) was a Hungarian national holiday: the commemoration of Hungary’s independence from the Austrian Empire. Prime Minister Viktor Orbán gave a speech in the rain that day, electrifying his compatriots in the audience — and anyone else who is permitted to hear or read a translation of the speech that has not been filtered, redacted, or expurgated by the legacy media.

His words were tougher even than those spoken by Geert Wilders. However, when Mr. Wilders becomes prime minister of the Netherlands, perhaps he will say something similar in his first address to the nation. He, too, may well proclaim his determination to resist the multicultural regime that has been imposed upon his country by the iron fist of the European Union.

When Mr. Orbán mentioned the events of 168 years ago, he was referring to the Revolutions of 1848, which swept like a wildfire across Europe and completely transformed the political landscape. The effect of the Revolution in Hungary was to force the Austrian Empire to concede the independence of Hungary, and grant it equal status with Austria in the empire. Thenceforward, what was formerly known as the Austrian Empire became the Dual Monarchy of Austria-Hungary, and so it remained until the demise of the empire and its dissolution under the Treaty of Versailles in 1919.

Many people who fear Hungarian nationalism confuse Mr. Orbán’s party, Fidesz, with the anti-Semitic sieg-heilers of Jobbik. As if to underline the distinction between Fidesz’ brand of nationalism and that of Jobbik, Mr. Orbán repudiates the “crime, terrorism, homophobia and synagogue-burning anti-Semitism” that would be imported into Hungary along with mass Islamic immigration.

This is the sort of speech that should be translated into dozens of languages and passed around as samizdat by oppressed dissidents currently groaning under the yoke of multicultural tyranny in Europe and other Western countries.

The video below is a subtitled 13-minute excerpt from Viktor Orbán’s speech. Many thanks to Dzsihádfigyelo for the translation, and to Vlad Tepes for the subtitling:

The full text of the translated speech will be posted here later.

65 thoughts on “Viktor Orbán: “The Time Has Come for Opposition and Resistance””