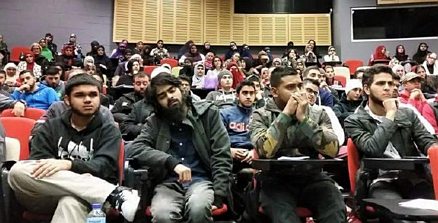 The Australian chapter of Hizb ut-Tahrir treats women in the same way that Muslims all over the world do — they segregate them from the men, even at public events.

When Alison Bevege learned that Hizb ut-Tahrir had required women to sit at the back of the room at a public lecture, she filed a complaint with the Anti-Discrimination Board. Last week she won her case.

This is a very unusual outcome for any legal process involving an Islamic group in Western countries. In most legal cases that include an Islamic group as a party, the group is the complainant, objecting to “discrimination” practiced against it by the kuffar. All too often our modern Multicultural judicial system just rolls over and rules in favor of Islam, which the infidel defendants massive amounts of money in legal fees, court costs, and fines.

It’s rare to see a case filed against an Islamic group, and rarer still to see a judgment go against the Muslims. So this victory against Hizb ut-Tahrir, small as it is, is worth celebrating.

The following news clip about the case was broadcast on Australian TV. Many thanks to Vlad Tepes for uploading this video:

Below are more details about the ruling in a piece written by Ms. Bevege for The Daily Telegraph:

I took on Hizb ut-Tahrir. And I won

“Get back in the kitchen, whitey.”

Without a hint of irony the next 10 tweets called me a racist. An Islamophobic bigot, a liar and a whore.

It was a swarm.

Hizb ut-Tahrir fans were enraged over an opinion piece I wrote for The Daily Telegraph in 2014 that shamed the Islamist group for sending women to the back of the room at their public lecture on the war in Syria.

I wrote that it was as terrible as Mississippi blacks being sent to the back of the bus in segregated America. And it is.

People should be judged for their character, intelligence, ideas and abilities — not their skin colour or gender.

On Friday, the NSW Civil and Administrative Tribunal ruled the event’s organisers broke the law when they gave me no choice but to sit at the back section of the room or leave.

The Tribunal has ordered them to make sure that everyone in their organisation understands that gender segregation is not compulsory.

They have to put up signs at their venues and in all published promotional material to make this clear.

Islamists argue that gender segregation is “separate but equal”, and voluntary — a free religious choice.

But secular Muslims exposed this idea as false. Lejla Kuric, a former Bosnian refugee, is among those who have pointed out that women are subject to social coercion if they step out of line in the West — and has written about how in countries where gender segregation is enforced women are severely held back in every aspect of life.

In their Draft Constitution of the Khilafa State, Hizb ut-Tahrir state that they want full Sharia, including gender segregation under a Caliphate. By imposing it at their events they are normalising it.

But the Tribunal drew a line on Friday: the rule of secular law trumps the demands of the religious in the public square.

It was a long road from October 2014 when I was first directed to the back of the room.

After filing the original complaint with the Anti-Discrimination Board there was a long stretch of email mediation with Ismail al-Wahwah on behalf of the group.

I wanted a public apology, a guarantee they would not impose it on the unwilling and for them to donate to charity.

Read the rest for an account of the difficulties Ms. Bevege encountered in actually serving papers on the targets of her complaint. At least one of the defendants absconded to Pakistan to avoid being served.

Hat tip for the article: Nilk.