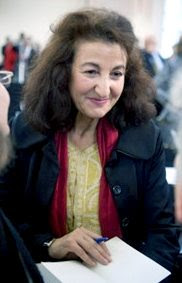 Necla Kelek is a Turkish-German sociologist. She was born into a secular Turkish family and lived in Istanbul until 1966, when she was nine, and then emigrated to Germany. Her family had been living a Western, secular lifestyle as members of the minority ethnic group collectively known as Circassians.

Ms. Kelek has written numerous books, including a biographical reflection on her life as a Muslim. She writes opinion pieces for German newspapers, but has not entered politics nor joined the political debates. She is said to be a practicing Muslim.

The following interview with Necla Kelek about Islam aired on the Swiss version of the television program “Rundschau”. Many thanks to Nash Montana for the translation, and to Vlad Tepes for the subtitling:

4 thoughts on “Necla Kelek: “This Book is Dangerous to Me””