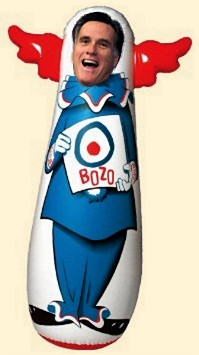 Mittens and Rage Boy are tag-teaming on Trump, calling him a phony and blah blah blah…

They refuse to recognize that Trump isn’t running away with the voters because of his record. Say it once more: Trump is drawing huge crowds because of his firm commitment to build a wall and to slow up the flood of immigration. He has a track record for building stuff.

[Of course, Obama was elected and Nobel-ized on the strength of his airy-fairy potential to perform miracles and then it turned out that all he could do was change wine into fetid water. But his past record was either sealed or non-existent.] 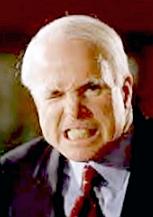 The nerve of those two! The last two front-runners for the GOP(e) presidential nomination want us to believe Trump would be bad for the country. Or summat like. You’d think the shame of their own previous performances would have induced some humility. Yeah, you’d think…

This would be doubleplusungood if either of them were ever to lead the charge again, but that’s not the case. The fact that they’re willing to badmouth Trump is merely a sign of the desperation inside the Beltway.

Look back at good-soldier Mitts in 2012, when he was running that inept campaign, following all the RNC talking points. Part of that plan was securing Trump’s endorsement. Get a look at the political footsie here:

In other words, Trump was a moment of convenience to be used to prop up Romney… for all the good it did. Now they have to pay the price: Romney and McCain are hoist on their own petard.

Back in 2012, even as hairline cracks were beginning to be seen in the hull of the GOP(e)’s latest version of deck chairs on the Titanic, people stalwart and true wanted to believe that a man who could clean out the Augean stables of the corrupt Olympics could also clean out the bloated federal behemoth. And he might have, had the GOP(e) not envisioned a different outcome, one where he lost and they kept their perks. Looking back it was obvious they wanted to be Number Two. Good heavens, they’re still at it, and just as smelly as ever.

Romney lost because he worked to lose. And now the insider idjits are so desperate they have plans to disinter him, inflate him a bit, and send him out to do battle against the Witch. Nope. It ain’t gonna happen, boys.

Besides, what has Romney done since his loss to Obama in 2012? No doubt he’s continued to work the financial sector. Big Deal. How has that made the country more productive?? The RNC’s 2.5 version of this campaign appears to be to inflate the Romney bounce-back toy and send him into battle against Hillary’s long knives. He’ll be armed with lots of gee-whiz sticky patches to repair her thrusts. Yep, that’ll work.

I wonder if the bookies in Las Vegas are taking bets on the likelihood of such a pathetic meet-up.

Or if they’ve yet begun to give odds on a possible date for the ritual suicide of the Republican Party.

Be sure to read The Conservative Treehouse take-down, and his explanation of Romney as the final tripwire. Most instructive. And definitely follow his links.

And go back to his much earlier rationale for his support of Trump, from July of last year. Sundance lays out the betrayals and the me-toos of the Republican Progressive Party.

Too bad, John and Mittens. Many voters are tired of your sermons, repeated ad nauseam. Same old virtuous outrage, same old misplaced hauteur. What’s that you say? Trump has had gargantuan failures? Look in the mirror, boys: try to convince us you’re one whit better.

When Trump wins, join the other liberals and progressives in the march to Canada.