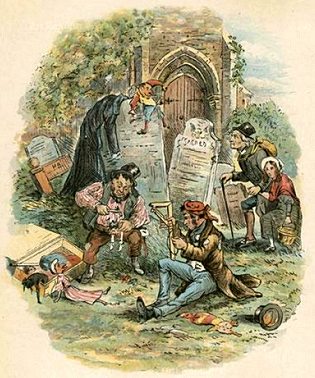 This year Christians’ observance of The Last Supper follows on the heels of the Jewish feast of Purim. Thus we have the whole megillah finished before Maundy Thursday, with Passover nowhere in sight of Easter this time around. Ah, well, the warp and woof of our respective feasts make yet another annual tapestry…

Pange Lingua was written by Saint Thomas Aquinas for the summer feast day of Corpus Christi, but is also traditionally used for Holy Thursday.

It is the latter which resonates for me: our solemn procession under the high arches of that downtown parish where Saint Mary’s Orphanage was located still echoes, even though the orphanage has long since been demolished. Whatever do they do with four floors of solid red brick, or with majestic but impossibly long windows that rattled in the wind?

The church still stands. It’s been ‘elevated’ to the status of Basilica. Somehow I doubt its new promotion has increased the lunchtime attendance it used to have when America was more religious than it is now.

The later feast of Corpus Christi, for which Pange Lingua was really composed, occurred each year while we were at Saint Mary’s Summer House in Orange Park. Out there, Sunday Mass was in a small Spanish chapel (which I read has since been turned into a Little Theatre, and that big old rambling mansion has also been torn down).

By then summer’s implacable heat combined with the distraction of birds flitting through the persimmon tree by the chapel window served to leach out the somber plangent mood of Saint Thomas’ hymn. The rites of Spring — the holy days of Easter, The Ascension and Pentecost, the re-telling of the core of our belief — had long since come and gone. The feast of Corpus Christi always seemed a placeholder during the endless summer Sundays following Pentecost.

On Hesperado’s blog, I found a wonderful link on his sidebar to an artist who happens to be Catholic. I think you might like her reflections on Pope Francis, and on papal elections in general. Given the Pope’s latest mal mot, spoken especially for Holy Thursday, it is good this woman takes the long view. Such spectacles as he makes require that kind of vision.

From March 22nd, her contemplation, “The Holy Spirit Is not A Fixer”:

Every so often someone writes to tender an oblique suggestion that I am not a true Catholic. A lapsed one maybe, a Jack Catholic, but hardly a staunch card-carrier like themselves. How else could I not bang saucepans for this pontificate? How else harbor unsmiling thoughts about Papa Francis? The correspondence goes something like this:

Straightaway, it helps to stay mindful that every pope, holy or reprobate, governs from within the Church, neither above it nor — as it sometimes seems — against it. He is not the Church itself. One can disagree with a pope’s personal slant, even dislike him for his modus operandi, without being charged with hostility toward the Church.

And, please — the Holy Spirit is not a fixer. Yes, we trust that the Spirit guides, but guidance is not domination. It is not determinative; it does not make puppets of a conclave or engineer outcomes. In light of man’s God-given freedom of will, it would be a scandal if it did. God does not dishonor His own creation.

Made in His image, we are an inventive species. Quite ingenious, the bunch of us. Since Eden we have learned how to manage guidance, retool it. We can over-ride the GPS, set it pointing where we want to go. We have a flair for rationalizing our own druthers as the will of God. It is an easy thing for clever men to parlay their innermost desires, drives, and ambitions into grand illusions of divine intent.

That white smoke from the Sistine Chapel chimney might signal choice of a God-pleaser. Or maybe not. The Spirit might smile or shrug. We are permitted to do the same.

According to Church law, papabile are forbidden to campaign for their own election. That is a polite advance on the days when a contending candidate might poison his opposition. With toxins off the table, cardinal-electors went full-throttle to canvass for their preference. John Paul II’s 1996 condemnation of lobbying was a back-handed admission of the persistence of the practice.

The papal order Universi Dominici Gregis bears analogy to the many sumptuary laws brought from England with the Puritans. The sheer number of them testified to the irrepressible love of color and finery. Puritan divines were hard pressed to maintain an orderly hierarchy of consumption. Hence, successive condemnations against satin and sable for all but a proper earl.

Just so, politicking — arguing your cause, stumping for your man — is as intrinsic a drive as love of adornment. It is also more consequential, hence more aggressively finessed. Indefatigable, it burrows under censure only to emerge refined and groomed for the fray.

No man rises to the cardinalate without a bent for bureaucratic subtleties and the crafts of diplomacy. In the lead-up to a conclave, is overt electioneering even necessary? There remain the time-honored wink and nod, the hand on the elbow, the stop-on-by-for-a glass-of-Glenfidich. There is the lending of a text or two, the have-you-seen-this-article? And, tell me now, what are your hopes for yourself, brother? Where do you see your charism headed? Where do you want to be come time to hang up the red zucchetto?

I sometimes think the Spirit takes delight in the game — even if the wrong team wins. True mirth has an astringent quality. It acts as a tonic against enfeebling sentimentality and makes us mindful that fear of the Lord precedes mercy.

To which I would respond, Christe eleison.

At this moment in the liturgical year, the church is Empty. We wait for Good Friday’s lessons. I don’t go to them anymore. They pierce the heart and who wants to hear the woman in the back, sobbing? Better to stay home and have one’s spectacle in private. Especially this year, with ISIS threatening to crucify a priest on Good Friday — for our edification.

Oh, Jerusalem, we weep for your children…

P.S. I recommend a visit to Studio Matters to see the art.