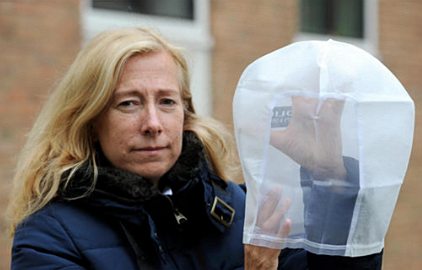 The following news story from Schleswig-Holstein doesn’t mention Islam, the ethnicity of the criminals involved, or even immigration. However, I have no doubt that the average German can read between the lines and determine what sort of perpetrator is most likely to hawk a loogie at the police.

Many thanks to Nash Montana for translating this article from the Kieler Nachrichten:

Masks to prevent spitting attacks on the police

Spitting attacks against police officers are disgusting and hazardous. The police in Schleswig-Holstein have now acquired 900 masks which can be put over an offender’s head to protect the officers from spit. In individual incidents the so-called spit-protective hoods have already been used.

Kiel — A final assessment by the police has not been submitted yet. The Police Union (GdP) welcomes the acquisition. Again and again it happens that officers on duty aren’t just insulted, kicked or beaten by unruly drunks or disturbers of the peace, but they also get bitten and spat at. The mouth used isn’t just full of microbes; there are also a host of viruses and bacteria present. Should an infection or a disease be transmitted through spitting, it gives cause for a charge of bodily injury, which normally offenders have been forced to accept. Other states have already acquired the masks and have had good experiences with them.

Schleswig-Holstein has now caught up. Spit attacks against officers aren’t individually recorded for statistical purpose with the state police — numbers were therefore not available. In order to protect officers from these dangers, the police have acquired 900 spit-protective hoods. “And so we have closed another potential gap in the area of self-protection,” says Jürgen Börner, spokesman for the state police. The hoods have already been delivered to the individual offices. A final assessment is still outstanding.

The first experiences with the spit-protective hoods are already in. Jürgen Börner did not want to give any numbers. In the past officers had to mask persons from whom a certain potential of danger was expected. “Each single incident was examined, and immediate coercion, in other words official impact through physical force, was applied,” Börner explains. The legal basis for it is provided by general administrative law for the state of Schleswig-Holstein. Under normal circumstances offenders are usually already cuffed.