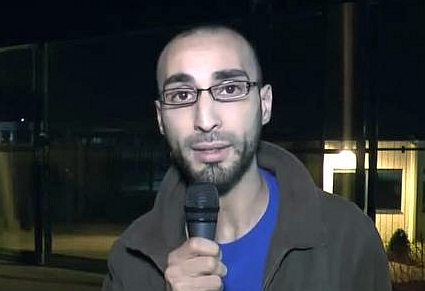 A few days after last week’s terror attacks in Brussels it emerged that one of the three suspects caught on camera at the airport — “the man in the white coat” or “the man in the hat” — was named Fayçal Cheffou. Unlike his companions, who detonated their devices and died in the blast, Mr. Cheffou fled the scene and was arrested later.

Fayçal Cheffou is said to be a former freelance journalist who became a mujahid. However, as far as anyone can tell, his sole journalistic contribution is the video report below from 2014, in which he laments the cruel, sadistic treatment of Muslim inmates at an immigrant detention center during the month of their Ramadan fast.

Below is a report from The Independent describing Mr. Cheffou’s part in last Tuesday’s massacre and his previous career, such as it was:

Faycal Cheffou: Who is the ‘freelance journalist’ charged with terrorist murders after Isis Brussels attacks?

A man who once claimed to be a freelance journalist has been charged with “terrorist murders” following the Brussels attacks.

There is growing speculation that Fayçal Cheffou could be the fugitive “man in the hat” seen with the two airport bombers on CCTV but prosecutors have not confirmed his exact role.

A statement on Saturday said that he had been charged with “participation in the activities of a terrorist group, terrorist murders and attempted terrorist murders” in connection with the explosions at Brussels Airport and Maelbeek Metro station.

Belgian media report that Mr Cheffou is the man pictured wearing a distinctive white coat and hat alongside suicide bombers Najim Laachraoui and Brahim el-Bakraoui in the departures terminal on Tuesday morning.

The suspected Isis militants died when they detonated the suitcase bombs they were wheeling on luggage trolleys but the third and most powerful device, believed to be the third man’s, was found unexploded after he fled the scene.

Little over an hour later, Khalid el-Bakraoui blew himself up at Maelbeek Metro station.

A taxi driver who drove the trio to the airport identified Cheffou as one of his passengers from photographs, Belgian newspaper Le Soir reported, but prosecutors have not confirmed the claim.

Cheffou was arrested near the federal prosecutor’s office in Brussels on Thursday evening alongside a man and woman who have since been released.

Their relationship and the reason for their presence in the area was unclear.

A search conducted at Cheffou’s home found no weapons or explosives, according to the federal prosecutor’s office.

Little appears to be known about the man, who has no Facebook profile under his name and despite apparently claiming to be a “freelance journalist”, is known for only one report.

In a video uploaded to YouTube two years ago, Cheffou reports from outside an immigration detention centre in the Belgian province of Steenokkerzeel.

With shouting and banging clearly audible from the building in the background, he claims the migrants and asylum seekers are protesting inside because they have not been fed.

18 thoughts on “From Journalism to Jihad in One Easy Lesson”