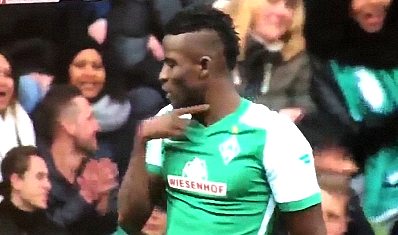 The following story concerns the Islamization of German soccer, and particular the intimations of beheadings that players are apt to direct at their opponents.

Nash Montana, who translated the piece from Politically Incorrect, includes this note:

The introductory paragraph is by PI, and the rest of the essay is by Thomas Böhm. The PI link has the video showing the soccer player’s death-threat gesture.

Is Papy Djilobodji a secret IS Terrorist?

For the “Sportschau” (Sports show) it was just an insulting gesture. In the closing phase of the Bundesliga games “Werder Bremen” against “Mainz 05” on Saturday, the Bremen Defensive player Papy Djilobodji made a gesture at the Mainz player Pablo de Blasis, which we are familiar with from many horror videos put out by the Islamic State. He drew his finger across his throat, which basically means: “I will cut your head off as soon as I get the chance.”

Quite perverse, but somehow very expected considering the current situation in Germany, came the reaction of the Bremen managers and trainers:

“I believe he just wanted to show with this gesture that he wasn’t going to be the dying swan. But a gesture like this shouldn’t be,” said Bremen Manager Thomas Eichin to “Sky”: “One should not make such a gesture because we all know the camera catches everything. We will talk with him.”

The Werder trainer Viktor Skripnik later talked about “an emotional case.” Djilobodji has “a temper”, is an “African type”…

It would be interesting to know then, just where the Senegalese Papy Djilobodji learned this gesture? Maybe here? (Wiki on Senegal)

Senegal is an Islamic-dominated country: Between 90% and 94% of the people are believers in the Sunni stream of Islam…

The Islamization of Senegal coming from Maghreb began between the 9th and 11th century in the country’s North. Between the 13th and the 16th century it spread among the Wolof Aristocracy, but remained a minority religion. Only in the 18th and 19th century did Islam become dominant with its anti-colonial message.

One interesting fact about Senegalese Islam is that almost every believer is a member of a brotherhood. These were established by charismatic thinkers of Sufism, and movements led by one Caliph decide the social life of the land in every aspect.

The way it looks, Papy Djilobodji didn’t just bring his soccer talent to Germany from his home country.

By the way, it is not the first time, that the Bundesliga had players announcing such Islamic death threats against players of an opposing team:

“A similar gesture led to the three-game suspension of the ex ‘St Pauli’-professional Deniz Naki in November of 2009, on the base of crass anti-sportsmanship behavior. After a goal against ‘Hansa Rostock’ (2:0), Naki gestured with his thumb the slitting open of his opponent’s neck, which provoked the fans of this player…”

Now, the insulting gestures of a soccer player are really not a rarity, but it still is shocking that the “Islamic dialogue” in the meantime apparently belongs to everyday soccer. And there is still a huge difference between showing the middle finger and an “I’ll cut your head off” gesture. Especially when one follows the daily news.

Whether this brutal Islamic “message” will bear any consequences for the “offender” remains to be seen, but the Bremen people remain relaxed about it:

There may be consequences looming for the Senegalese, since he still could be blocked from playing by the DFB-Control Committee. But Eichin didn’t seem too bothered. “I am not worried, we have had enough preliminary proceedings. We don’t need a preliminary proceeding for every single thing,” said Eichin…

But no matter, whether or how long the Senegalese will be blocked from playing — one thing has become very clear: The Islamization of our society, and our lives, has arrived already on our soccer fields.

And so it may perhaps be only a question of time, until the first Muslim soccer player pulls out his knife and slits the throat of his opponent while screaming “Allahu Akhbar!”

At the very least this would call for a penalty.

5 thoughts on “Culturally Enriched Soccer in Germany: Off With His Head!”