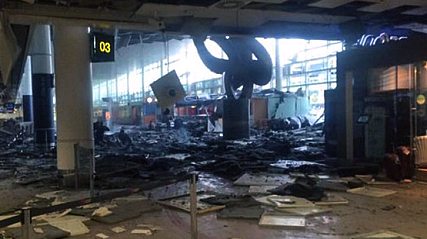 Geert Wilders: “I am extremely shocked by today’s events in Brussels. Travelers were murdered in cold blood at Brussels airport, commuters were killed in the metro. Once again, Islamic jihadists hit the free world very hard and slaughtered dozens of innocent people. After Paris, Boston, London, Madrid, New York, this time terror struck in Brussels. Next time it might be Amsterdam.

“It is time to act. First of all, we must close our national borders and detain all the jihadists whom we have foolishly allowed to return from Syria. We must also tell people the truth. The cause of all this bloodshed is Islam. We need to de-Islamize the West. That is the only way to safeguard our lives and protect our freedom.”

A major terrorist attack occurred in Brussels today. There were two simultaneous explosions at the airport and another not long afterwards at the main train station. More than thirty people were killed.

This is breaking news, and there’s way too much information for me to collate and report on. Here’s a useful list of headlines and links culled from Drudge:

Brussels was already on the highest possible terror alert, so what do they do next? I don’t suppose the option of cordoning off Molenbeek and establishing entry/exit checkpoints is in any of the security services’ contingency plans…

I’m familiar with both locations. I remember coming out of the train station and looking for a taxi the morning I arrived in the city back in July 2012. I noticed that all the taxi drivers seemed to be Muslim immigrants, as were most of the service workers at the station. It made me wonder how easy it would be for “sleeper” employees to arrange for a terror attack at such a prominent, crowded location.

46 thoughts on “Carnage in Brussels”